When Madonna and Guy Ritchie walk down a red carpet, there’s almost nothing people don’t ask. 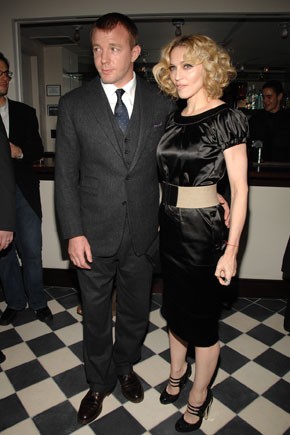 When Madonna and Guy Ritchie walk down a red carpet, there’s almost nothing people don’t ask.

What did she first notice about Guy?

“I found him very sexy because he looked like he’d just gotten into a fist fight.”

What has she taught him about fashion?

“Not to wear the same dresses as her,” deadpanned her husband.

What books have they been reading?

“‘The Year of Magical Thinking,’ by Joan Didion,” said the wife.

“Because I’ve gotta support the girls,” she said. “And because I’m a big fan of the Clintons.”

At a certain point, the questions seemed mainly to be hitting Madonna, even if it was the U.S. premiere of his movie, “Revolver.”

Had she watched lots of gangster movies before she shacked up with the man who’s sometimes been described as the British version of Quentin Tarantino?

“Well, I worship ‘The Godfather’ Pt. I and II,” she said. “And we watched a lot of gangster movies together. But none were as good as his.”

After the Cinema Society and Piaget’s screening of the film at the Tribeca Grand, guests like Sarah Jessica Parker, Steven Klein, Ingrid Casares, Alex Rodriguez and Donna Karan headed out to The Gramercy Park Hotel, where the party went ‘til around midnight.