Annual gala celebrates 'The Model as Muse" exhibit at the Metropolitan Museum of Art. 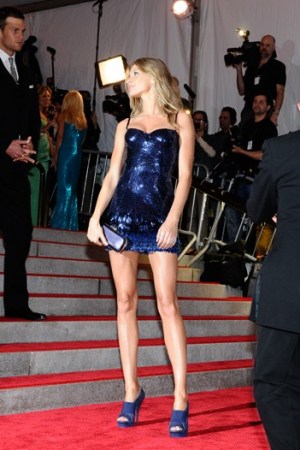 From Twiggy and Beverly Johnson to Agyness Deyn and Sasha Pivovarova, models strutted their stuff at the Metropolitan Museum of Art’s Costume Institute gala on Monday for “The Model As Muse” exhibit — and that’s to say nothing of the high-wattage celebs like Madonna, Kate Hudson, Victoria Beckham and Renée Zellweger who attended. Though the weather was wet, suffice it to say no one wore a raincoat.

“My hair’s underneath here somewhere,” said Kate Moss in a custom gold lamé turban and dress by her co-host Marc Jacobs and Harry Winston jewelry.

Even the fashion folk — more than familiar with statuesque women in designer gowns — were enjoying the eye candy and the engaging “The Model As Muse” exhibit.

See the ‘Model as Muse’ exhibit

“A good model is inspiring,” said Alber Elbaz, a sentiment many of his peers echoed. Of course, the designers weren’t the only guests who know these ladies’ stats.

“He’s a model expert,” Melania Trump said of her husband, Donald. Can you blame him? After all, as Russell Simmons put it, “Actresses are too difficult.”