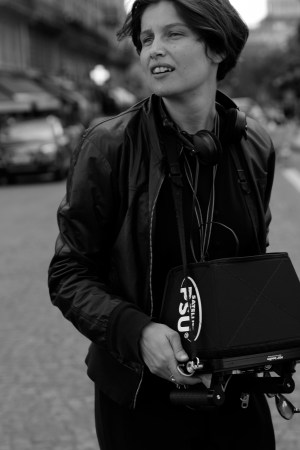 CANNES, France — Laetitia Casta has lifted the lid on her directorial debut at the 2016 Cannes Film Festival.

The model-turned-actress presented the 26-minute short, titled “En Moi,” on the closing night of the Critics’ Week sidebar. Starring Yvan Attal and Lara Stone, making her acting debut, it tells the story of a movie director struggling with solitude and fear of failure.

Having starred in movies ranging from art house films such as Raoul Ruiz’s “Savage Souls” to big-budget popular movies like “Asterix and Obelix vs. Caesar,” Casta went for a distinctly uncommercial approach.

The film, which was shot at the Paris Opera, has drawn attention for a scene that features women walking naked from the waist down. Most of them are non-professionals who responded to an open casting call, Casta said in the press notes to the film.

“If it were a man who had these women parading naked, it might even have been frowned upon. But because I am a woman behind the camera, these are just women walking and stating their identity. But it wasn’t easy to convince them that I needed them to be naked without their feeling ashamed of what they are,” she said.

“Close-ups of female genitalia have been filmed before, but in this scene there are a number of them in close succession. This scene came to me after a day spent in a steam bath. I had been inspired by all of the femininity in that steam. Seeing those bodies of all ages was marvelous,” she added.

“I thought to myself, ‘Why do women need so much time to accept their body?’ While filming the women’s genitalia, it’s as if the little girl in me was discovering her mother’s or another woman’s private parts. I find women 10,000 more beautiful than men. I wouldn’t say it’s a feminist film, but it’s definitely feminine,” Casta said.

Casta met Stone when they appeared together in an advertisement for L’Oréal Paris Elvive Fibralogy hair products.

“Lara was perfect because she was exactly where this character is at. I had worked with her on a commercial and she had no confidence in herself whatsoever: she was like a child you want to nurse and take in your arms. At the same time, there was this incredible strength about her in front of the camera,” Casta recalled.

“This strange mix reminded me of many things and so I told myself that one day I would shoot a film with her,” she explained.

Casta’s film was screened together with the directorial debuts of two other actresses: “Kitty” by indie darling Chloe Sevigny and “Bonne Figure” by French actress Sandrine Kiberlain.