Colin Firth handed the inaugural prize to Moore on Friday evening during the Venice Film Festival, an event that was followed by a dinner attended by many of Sozzani's friends in the industry, from Donatella Versace to Pierpaolo Piccioli. 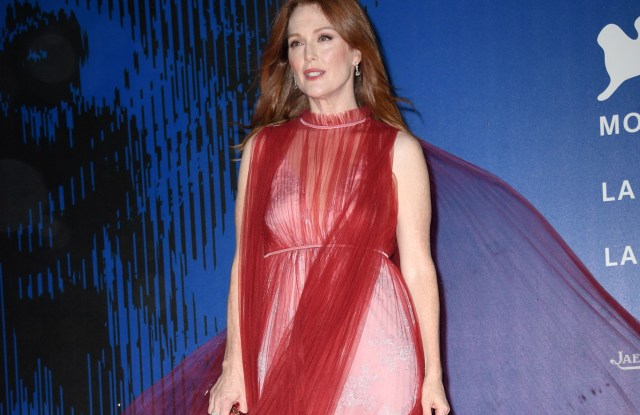 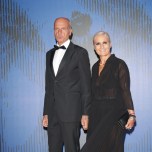 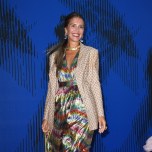 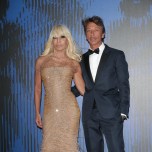 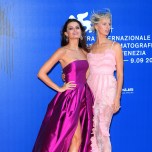 VENICE — “It’s nice to leave a trace,” said Franca Sozzani in a brief clip from the documentary on her life. And a trace she did leave.

Family and friends of the late Vogue Italia editor in chief gathered at the Lido here Friday evening, during the city’s Film Festival, when the first award in her name was bestowed to Julianne Moore by Colin Firth, an event that was followed by a dinner at Palazzo Contarini Polignac.

“She was a tough critic if I didn’t get the best of the best — I think she would be happy to have two Oscar winners here,” said Sozzani’s son Francesco Carrozzini, as a thunderstorm pounded the pavilion where the ceremony was held. “She is listening to us,” he joked to a round of laughter of his mother, who died in December.

Carrozzini directed the film “Franca: Chaos and Creation,” which premiered in Venice a year ago. “With friends, we wanted to honor her legacy, her creative freedom and endless curiosity,” he said of the decision to launch the award with Sozzani’s sister Carla and her niece Sara; Carlo Capasa, president of Italy’s Camera della Moda; Tod’s Diego Della Valle; Valentino’s Pierpaolo Piccioli; Moncler’s Remo Ruffini; Donatella Versace; Pirelli’s Marco and Afef Tronchetti Provera and film producer Marco Valsecchi, who were all at the event.

He spoke of Sozzani’s real admiration for Moore and how she “did not just lend her name” to different causes. On another personal note, Carrozzini said one year to this date also marked the beginning of his relationship with Bee Shaffer, to whom he is now engaged.

Moore, wearing a pleated Valentino gown in different shades of red, praised Sozzani’s “professional fearlessness and honesty,” and the “enormous impact beyond herself.” With her work, “she stopped time and we saw what she wanted us to see.”

Later at the dinner, Moore said she was “super surprised” when she heard about the award and remembered how personal the relationship with Sozzani became and how the two linked. “She made me feel like she knew me. I really admired her. She looked like a tiny angel, beautiful with her long blonde hair,  but she was so determined and earth-bound, with a sharp wit and sense of humor, with no self-importance. For her son to have done this, it’s so meaningful.”

Firth joked about his relationship with Moore, his costar in “A Single Man,” directed by Tom Ford, and in “Kingsman: The Golden Circle.” “The first time she tried to kiss me, under script constraints, I was obliged to decline. The second time, she tried to kill me and again I had to decline. The former was more challenging,” he said from the stage during the award ceremony, adding that he was “recovering from her breathtaking performance.”

The award was a blue globe designed by Jeff Koons.

Ahead of the dinner, Firth admitted he was still touched by “sitting next to Franca only last year — it made an impact on me,” to see the documentary, and pointing to a conjunction of different elements, Moore and Venice, where “A Single Man” also premiered in 2009. “I realize Franca was the common factor.” His relationship with Sozzani dated years back and he remembered being interviewed by her and photographed by Carrozzini for a L’Uomo Vogue issue in 2014.

“We were rivals, asking who was the most famous blonde in fashion,” joked Donatella Versace, during a brief speech at the dinner.

“She would have wanted a no-nonsense speech, to the point and effective,” said Piccioli, in his own tribute. “She had a degree in Germanic philology and I dare anyone to define this,” he joked, marveling at her journey into helming Vogue Italia. “She used to say, I bet on the winning horses or maybe I am just lucky [using a colloquial Italian expression]. Ours could have been a professional relationship, but for some reason she gave me her friendship. She called me Nettuno [Neptune, from the Italian city outside Rome the designer lives in], but she was not surprised  by this.” After more heartfelt remarks, Piccioli concluded, “OK, now she would say cut the bull…”

Beatrice Borromeo, accompanied by her husband Pierre Casiraghi, and Naomi Campbell also stood up to talk about Sozzani, and while both were moving, the latter drew some laughs with an image of Carrozzini as a being baby sat by herself, Linda Evangelista and Christy Turlington.

“I would call her aunt and she would call me uncle,” said Matteo Marzotto, but “she would talk to me like a mother. She would suggest but never impose.”

Livia Firth, wearing a white dress made by Alberta Ferretti from recycled plastic, was also at the event. “Livia always stimulates to push the boundaries,” said Ferretti of the sustainable design, championed by Firth.

“For Franca, this and so much more,” said Maria Grazia Chiuri.