2019 Cannes Film Festival: Elle Fanning on Growing Up in Film

As the youngest member of the jury of the 2019 Cannes Film Festival, the American actress at 21 has lived a life in film.

CANNES, France — “Cannes is probably the most dramatic red carpet in the world,” says Elle Fanning, who at the opening ceremony of the 2019 Cannes Film Festival on Tuesday owned the moment in an Old Hollywood-infused Gucci gown in a soft pink silk with billowing cape. As the youngest member of the event’s jury, headed by Mexican director Alejandro González Iñárritu, the American actress and L’Oréal Paris ambassador exuded a sophistication and poise beyond her years.

Still buzzing from the moment, Fanning, who started her film career at age two, sat down with WWD the next day to share some words on the experience as well as her life growing up in Hollywood.

Elle Fanning: When it showed up, my mouth just fell open. I was, like: “This is the one, this has to be for opening night.” And it’s something I’ve never worn before, it’s definitely a different silhouette for me. I tried to go for an Old Hollywood vibe, but it also looked a little boudoir, like a really fancy nightgown.

WWD: In terms of what you’ll be wearing down here, are you looking to support any designers in particular, or any direction?

E.F.: There definitely are go-to designers that I have personal friendships with. The Rodarte sisters are very close to me, and Miu Miu and Mrs. Prada. Supporting women designers is also important for me, especially this year at this festival, so watch out for that.

WWD: You started acting at age two, playing the younger sister to your real-life sister Dakota in “I Am Sam” (2001). You have literally lived a life in film.

E.F.: I was on set with my sister and I looked a lot like her, so the director was like, “Can we use her in a flashback scene?’” So I got to swing on a swing with Sean Penn, that was my first role.

WWD: That’s pretty surreal. At 21, does it feel like you’ve grown up in a Hollywood bubble?

E.F.: I’ve definitely had experiences that other people might not have had. Also, people will say, “Oh, you have an old soul,” and I’m like, “What does that mean?” I don’t know, I went to a regular school, I went to proms, I went to parties, I did all of those high school experiences, so that was really important in my life because, otherwise, you don’t really end up having any friends your own age. On sets, it’s mainly adults. But I also really cherish the fact that I was on set with a lot of adults at a young age, because you learn things, as well as this experience of traveling to places, seeing different cultures, eating different food, and having to adjust to that lifestyle, which is something that was really exciting to me.

I do realize it can be seen as, “You’re so young to be doing this,” but it is something that I absolutely love. I can’t live without it; acting is my everything.

WWD: Twenty-one is such a symbolic year. Does it feel like a turning point?

E.F.: It does a bit. You know how each year people always ask, “Do you feel older?” and you’re like, “No, not really.” But this year, turning 21, I did feel slightly older. That was actually a cool feeling, because growing up in this industry certain characters are offered to you because of your age, or the age you look. I’m excited now because new roles are opening up for me, I’m growing as an actress. Getting scripts now for different parts and characters is what excites me.

WWD: You donated to the #MeToo movement, do you feel like you’re part of a generation of actors who are going to live a different experience, now that it’s a new era?

E.F.: I do, I feel strongly about that. I know these kinds of things take a long time and can’t happen over night. My generation is very outspoken in such a great way, we are not afraid to speak the truth and speak our minds, and that’s important. I think for a long time a lot of things have been covered up and hidden, and finally we’re lifting the curtain on all of those things. 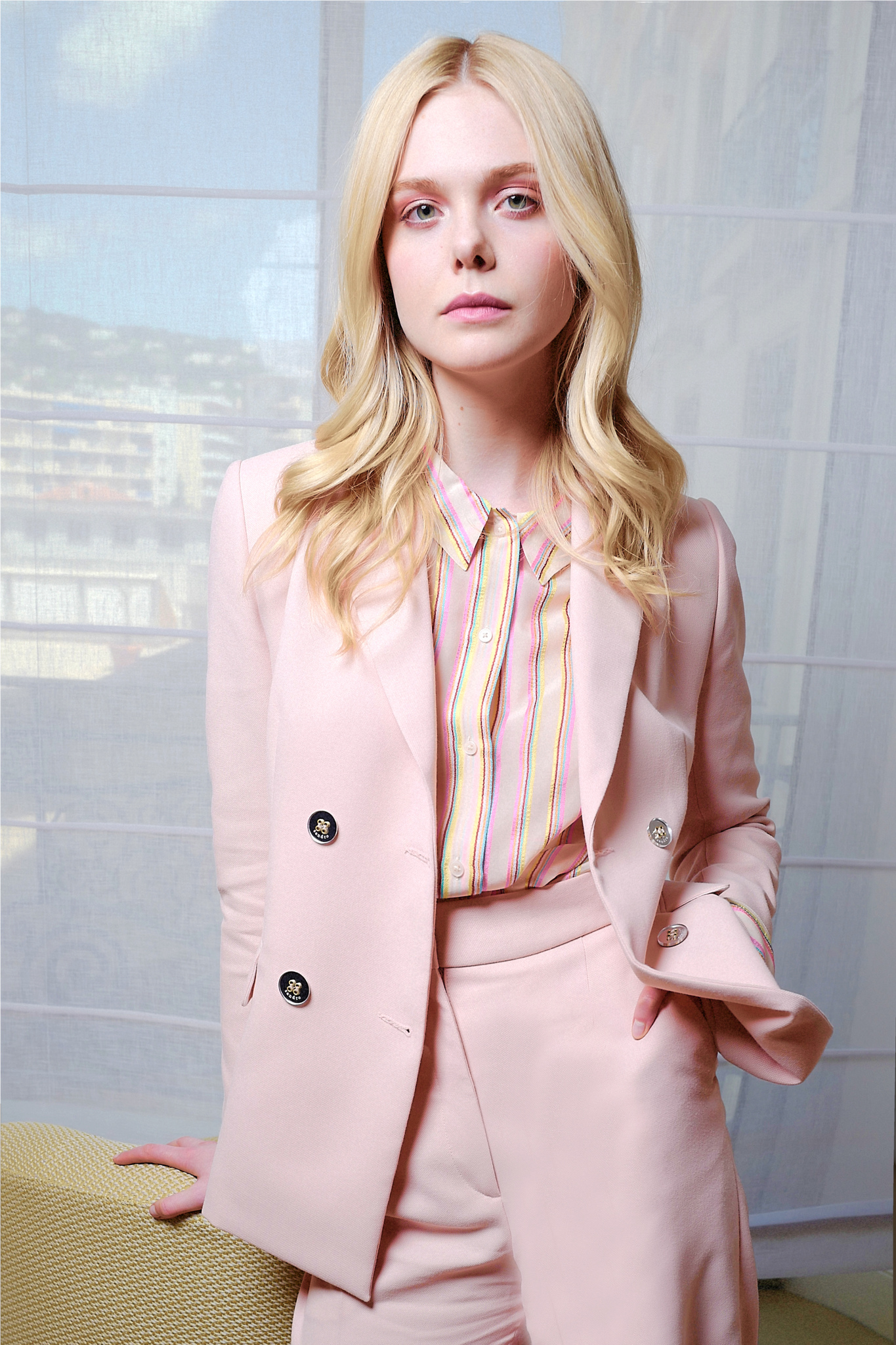 E.F.: I’m very fair so I have to wear a lot of sunscreen. It’s funny, being on set and working with actresses like Patricia Clarkson and Kim Basinger — they’re super fair as well, and they would look at my skin and say, “Wear big hats, protect your skin.” So, I’ve always kept that in mind, ‘cause I’ll just turn into a lobster, anyway.

WWD: The circular economy and vintage is very big right now, with the climate crisis. Is that something you support?

E.F.: I’ve always been very obsessed with antique and vintage clothing from a very young age, to the point where I would get made fun of in school — also for wearing clothes that smelled, you know that musky smell. But I was like, “I don’t care.” I actually kind of like it, it’s like you’re in someone else’s skin, it gives you another life. So I was that person and still am, with everything that’s going on.

I wore a vintage dress to my 21st birthday, from Playclothes, my favorite vintage store in L.A. It was pink, obviously, strapless, and either from the Fifties or Eighties, sometimes you can’t tell. I cut it off to tea length, but it was a ballgown, with tiny little ballet-type ribbons. It’s on Instagram.

WWD: Los Angeles is becoming increasingly relevant for fashion. Is it something you’ve sensed?

E.F.: I don’t know, I actually spend a lot of time in London. Oddly, everything I film ends up being in London. I’m about to be there for six months to do a show, “The Great,” in which I play Catherine the Great.

WWD: How are you tackling the role?

E.F.: It’s written by Tony McNamar who wrote “The Favourite,” so it has a dark comedic tone to it. I’ve never really done comedy before, and it’s not based on historical facts, so it’s fun. With a story like this, the scripts are really what matter the most, you get the gist of her life and what she was going through. It’s not like you can listen to her voice or hear the way she talked, so you have to create your own version of what she is. I don’t necessarily look like her — I have blonde hair, she had very black hair, so we’re taking liberties a bit, but staying true to her essence and how badass she was. She overthrew the whole kingdom, she brought female education back to Russia; she brought enlightenment back to Russia.