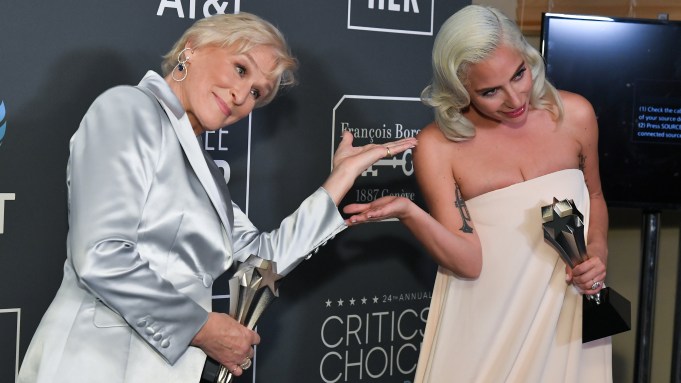 LOS ANGELES — On Sunday afternoon, the blue carpet was rolled out on the grounds of Santa Monica’s historic Barker Hanger, for the annual 24th Critics’ Choice Awards.

Hosted by Taye Diggs, the award ceremony saw a sea of faces: some already established including Regina King, Patricia Arquette, Lady Gaga and Amy Adams; others new players such as KiKi Layne and Dina Shihabi.

“I’ve been crying for the last 24 hours,” Shihabi said of her Supporting Actress in a Drama Series nomination for “Tom Clancy’s Jack Ryan.” “It’s so great that I get to celebrate playing an Arab Muslim woman in this way. It’s great that this character is getting the recognition.”

Fresh off her recent Golden Globe win, and later adding to it the Critics’ Choice Best Supporting Actress in a Movie/Miniseries award, Patricia Clarkson of “Sharp Objects” noted: “It’s nice to win, please god; it’s nice to be here, but I love the show so much. These dark, complicated characters demanded so much of us.”

That same looming pressure was also present for “Pose” writer and producer Our Lady J, who mentioned of the writing process, “When you have events like this it reminds you to just get the words down because something’s going to happen.”

While award ceremonies bring accolades for hard work, they can also bring judging eyes. “It’s residue from a dying patriarchy,” Lady J said of recently landing on a worst-dressed list for her Golden Globes ensemble, and deciding to address the situation on social media. “I’ve talked to a lot of women who feel really limited in options. They’re not a size 2, a size 4 or a size 6. I just thought I would speak up for my sisters who are like, ‘I want to wear that cute dress, too.’”

“I shut down toward fashion and I thought it’s not for me. But what I noticed lately working in the entertainment industry, as a writer, people are teaching me that fashion is for everybody and any size. You have to work a little harder to find things in your size, but you should own it. The world is changing,” she said, embodying the sentiment by wearing a gown by designer Christian Siriano, who has made inclusiveness a cornerstone of his business.

“I want girls to see themselves in a variety of different ways, whether that be skin color or tone, dress size and weight,” said Howell-Baptiste. “If we’re actors, we really need to reflect the world that we’re living in and I also think that there are a lot of people in this industry that will tell you to change your body or change this. In my fitting with stylists Wayman and Micah, there were moments after Christmas where I felt like ‘I’ve eaten a lot’ and they were like ‘don’t even worry about that girl.’”

“I’m a Latin woman,” Mason said. “It’s frustrating to grow up and see that stuff’s not made for my height or my shape. So I love finding brands that fit and celebrate my body.”

And while breakout star KiKi Layne is aware of the attention she’s been gaining for her work in “If Beale Street Could Talk,” as well as the accompanying looks she’s worn to promote it, her focus is also on her craft and the impact it’s having on viewers. “I’m just trying to take it one day at a time. At the core of it all I’m an artist,” said the up-and-comer, who will next been seen in “Native Son,” premiering at Sundance. “It’s important to me to have a variety [of roles] and to represent black actresses and dark skin black actresses with natural hair in a way that Hollywood really hasn’t made room for.”