A Bag of Tricks at ‘The Great Buck Howard’ Premiere

Tuesday night a crowd gathered at the Soho Grand for the premiere of "The Great Buck Howard," in which John Malkovich plays a washed-up mentalist. 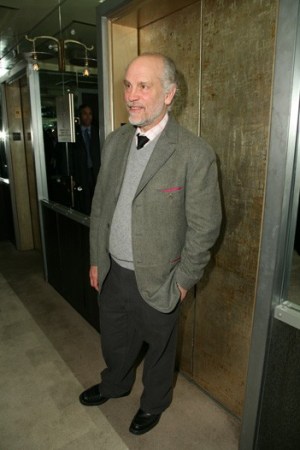 Tuesday night a crowd gathered at the Soho Grand for the premiere of “The Great Buck Howard,” in which John Malkovich plays a washed-up mentalist. The actor prepped for the role by watching DVDs of the Amazing Kreskin, on whom the film is loosely based, and by training with a magician. But Kreskin needn’t worry — Malkovich won’t be stealing his thunder anytime soon. “My magician skills were never really of an extraordinary high caliber,” said the actor before the screening, which was hosted by the Cinema Society and Brooks Brothers.

What he is much more skilled at is fashion design — Malkovich designed 10 collections for his line Uncle Kimono, but then stopped. “I may start again,” he said. “At the end of the month I’m going to Italy to meet with some people. They’ve asked for some drawings, so we will see.” Meanwhile, the film’s writer and director, Sean McGinley, said the intimidating actor was actually a pleasure to work with. “It was kind of disappointing,” he said. “I almost wish that he would have let me have it but he never did.”

Actress Emily Blunt, who plays a publicist, was walking her third red carpet in the past seven days — but she wasn’t complaining. “I feel fine. It’s really fun,’ said the actress, who premiered “The Young Victoria” in London before jetting to L.A. for “Sunshine Cleaning,” and was in New York City for just 24 hours. “You just have to try not to fall over in front of the flashes.”

Meanwhile, star Colin Hanks (dad Tom produced and has a small part playing his onscreen dad) was on a break from making his Broadway debut in “33 Variations.” “I like both stage and screen,” said the younger Hanks. “They are apples and oranges, but they are both really delicious fruit.”

Joining him for the screening and the after party was his stage costar Jane Fonda, as well as Blythe Danner, Debra Winger, Michael Stipe and Jason Schwartzman. And just as most folks were headed home, Rose McGowan arrived, very fashionably late.