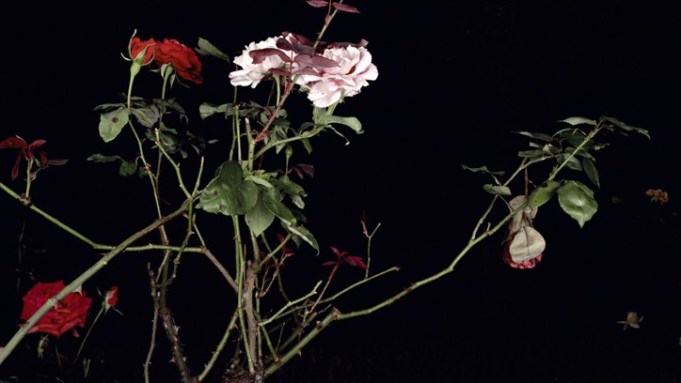 LONDON — The mood was decidedly subdued on the opening day of London’s Frieze Art Fair Thursday, but exhibitors were optimistic about the prospect for sales.

“I think yesterday there was a bit of relief,” said Pauline Daly, director of London’s Sadie Coles gallery, referring to the fair’s packed preview day Wednesday. “It’s not the big hustle and bustle, but everyone seems to want to talk more about art and take more time — it’s a bit calmer.”

Sadie Coles’ space at the fair exhibited pieces such as a Richard Prince collage made up of black-and-white photographs of Sid Vicious and Kate Moss and angora dresses by Andreas Zittel shown on mannequins.

Maureen Paley, whose East London gallery represents artists including Wolfgang Tillmans, Gillian Wearing and Banks Violette, also said buyers were in a reflective mood — but that didn’t mean they were only gravitating toward commercial pieces. “People need still to dream,” said Paley, adding she’d recently sold a piece of video art by Violette which depicts a galloping horse. “You might say people would [buy] something substantial and sculptural…but people need to preserve the poetry and lightness in their lives.”

Paley said that it would be “wrong to make predictions too early” about how the financial crisis would affect the art market. “We’re on a little roller coaster,” she said.

And it seems there’s still enough allure in the art world to attract the attentions of the fashion crowd — Cartier, one of Frieze’s major sponsors, held a dinner Thursday night at London members’ club Paramount, while on the same evening Salvatore Ferragamo turned its Bond Street store into a gallery space to show an installation by video artist Cecile Paris. The German fashion label Clemens en August — which sells its clothes through gallery spaces rather than through stores — also has a spot at the ICA and East London’s Rivington Place gallery this week.

“People who have always collected art will continue to collect,” said Allison Card of New York’s Metro Pictures gallery, which represents Cindy Sherman and Robert Longo, among others. Indeed, visitors jostled for space among the stands of the 151 galleries showing their wares in the sunny venue, which has been designed by architects Caruso St. John, and there were plenty of red dots stuck on works around the fair. “[Now] people are buying wisely, sales are steady and [buyers] want to talk about the artist more…people buying art [chiefly] as an investment look at things differently,” added Card.

Many exhibitors at the fair said prices for their works hadn’t been affected by the financial slump, which saw London’s FTSE 100 sink 5 percent Thursday. “Our pieces don’t tend to be priced to reflect what the financial markets are doing,” said Rachel Helfand, sales associate at London’s Victoria Miro gallery. “We have collectors that come here looking for the same sort of thing [they have bought before] and people looking for something new in a lower price bracket — we have different levels of collector.”

But Nicole Klagsbrun, whose eponymous New York space represents artists including Mika Rottenberg and Adam McEwen, said there would likely be a “readjustment” of prices in the art market, but that it would probably come a little after the financial markets’ fall. “We have a few months’ leeway,” said Klagsbrun with a laugh. “Buyers probably will take less risks — but perhaps not if the price is right.”