The children's book writer Neil Gaiman recently won The Newbery Medal for another one of his spooky tales for kids. 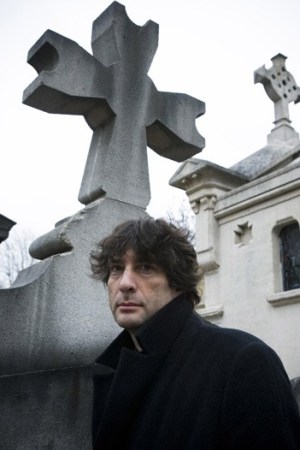 Neil Gaiman’s boyhood dream of becoming an author was straightforward enough — write something and one day a big car drives up with a pile of money.

This story first appeared in the February 3, 2009 issue of WWD. Subscribe Today.

“Of course, I had never met a writer,” he says. “And it doesn’t really work like that.” Needless to say, his adult children have not developed the same ambition. “I am pretty sure that the reason they are not writers is because they got to watch me be one. They see me walking around the house in a dressing gown, not shaven, grousing at everyone, making a cup of tea and then going back to a recalcitrant manuscript.”

But these days Gaiman is far from the scruffy hausfrau he paints himself to be. Last week he pocketed The Newbery Medal for his children’s story “The Graveyard Book,” and an animated version of his tale “Coraline,” starring Teri Hatcher and Dakota Fanning, hits the silver screen Friday. Two more books, including “Blueberry Girl,” a poem he penned for his friend Tori Amos, are due out this year.

Inspiration for “The Graveyard Book” came more than 20 years ago while Gaiman was watching his then three-year-old son gleefully tear through a cemetery on a tricycle. Gaiman said he swiftly sat down to put pen to paper, but soon decided, “This is a much better book idea than I am a writer.” So he set it aside, giving it another go every five or six years, to no avail. Around 2005, Gaiman decided his craft wasn’t going to improve. “I figured this is the hand I’ve been dealt so I’d better get something down on paper,” says the British-born Gaiman modestly given his extensive oeuvre, which also includes short stories, adult novels and the famed graphic novel series “The Sandman.”

The resulting tale about Nobody Owens, aka “Bod,” serves up plenty of double entendres and word play to jolly parents along. (Only in a graveyard would a lullaby close with “some hairy bacon.”) But the bones of the book — a triple homicide introduction, a toddler fleeing in the night, ghosts-turned-caregivers, and a cemetery-bound narrator longing to live — may sound a bit weighty for youngsters. Gaiman insists adult readers are more prone to get spooked by the plot partially because their “imagination will fill in what I don’t say. Kids are much more inclined to read what is there and move on,” says the author. “This is a book about family and community and growing up and the cost of growing up. One of the great joys of being a parent, and the greatest tragedies, is that if you do your job properly, your children grow up and go away. But they have to be away to know who they really are.”