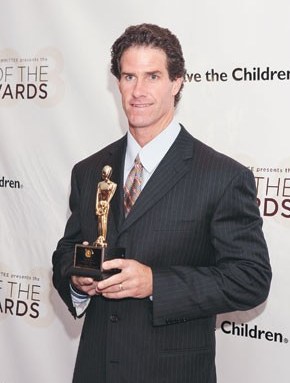 For Ron Klein, the chairman and chief executive officer of Macy’s East, being a father means being a teacher.

“My father was an immigrant. He loved this country,” said Klein. “He taught me about determination, drive and perseverance, love of learning, pride and humility. Those are great lessons. I hope I can pass them on to my children.”

During a luncheon Wednesday in Manhattan that was filled with sentiment and family recollections, Klein, Randy Jackson of “American Idol,” former New York Yankees and Cincinnati Reds baseball star Paul O’Neill and Mark Shriver, vice president and managing director of U.S. programs for Save the Children, were honored as Fathers of the Year by The National Father’s Day Council. The event, held at the Marriott Marquee, drew 850 people and raised $575,000, plus more from a silent auction, for Save the Children. Klein, a father of three, also received the 2008 Milton Margolis Humanitarian Award.

“My father was my hero and my mentor as a baseball player,” said O’Neill. “We had such a bond.” Two of his children work at an orphanage in Mexico. “You know you’ve done something right when your kids jump on a plane and are eager to help other kids.” As an athlete, O’Neill added, “You don’t get too many awards outside athletics that mean something.”

“If my Dad was alive and here, he’d say, ‘Yeah, dude. You finally made it,'” Jackson said. “This would be his proudest moment.”

“I honestly don’t think there is a more important job than being a father,” said Shriver, whose father, Sargent Shriver, led the Peace Corps and years ago was also a Father of the Year. The elder Shriver is now battling Alzheimer’s.

“He always seemed to be there at home. He never raised his voice and he went to Mass every day,” said Shriver.

Also, Murray Day, a general manager of a Honda dealership in San Bernardino, Calif., was honored as the All-Star Dad based on an essay written by his stepdaughter Celina Lopez, one of thousands submitted as part of a contest sponsored by the National Father’s Day Committee, Best Life Magazine and the Sani Family Foundation. To date, the Father’s Day/Mother’s Day Council has donated nearly $20 million to charities, including more than $3.5 million in 2007, and close to $1 million for Save the Children.