A Family Affair: Joe Corré Takes a Hard Look at Growing Up Punk in New Film

“My parents are not iconic," argues Corré. "In the Seventies, they were called everything from scum and outsiders to geniuses. Now my mother is considered a national treasure."

LONDON — Despite multiple attempts on its life, punk just won’t die: It stomped through the London spring 2020 men’s collections at shows such as Charles Jeffrey, and pierced its way through Riccardo Tisci’s latest collections for Burberry and Versace’s fall Nineties-inspired outing, where the front-row gift was a plastic pack of gold safety pins in a variety of sizes.

There’s a reason for punk’s longevity: It’s about democracy, vitality and freedom of speech. As designers, musicians and advertising agencies know, punk can also be a terrific money-spinner.

And that really bugs Joe Corré, the son of designer Vivienne Westwood and Sex Pistols manager Malcolm McLaren. In 2016, he set fire to millions of dollars worth of memorabilia to poke a finger in the eye of those celebrating punk’s 40th anniversary.

“Malcolm would be turning in his grave if he saw ‘Anarchy in the U.K.’ printed on a f–king credit card,” says Corré in the upcoming documentary film he made called “Wake Up Punk.”

Corré, a clothing entrepreneur, investor and environmental activist, was referring to the wave of punk-lite merch created to mark the anniversary, including Virgin Money credit cards with a Sex Pistols theme.

“For some strange reason, all of these British institutions decided suddenly they were going to celebrate 40 years since the Sex Pistols debuted in the U.K., and it just felt like such a contrived marketing exercise. Maybe they did it because there wasn’t a royal wedding that year,” deadpans Corré during an interview at his office in northeast London, which is housed in Alexander McQueen’s former design studio. 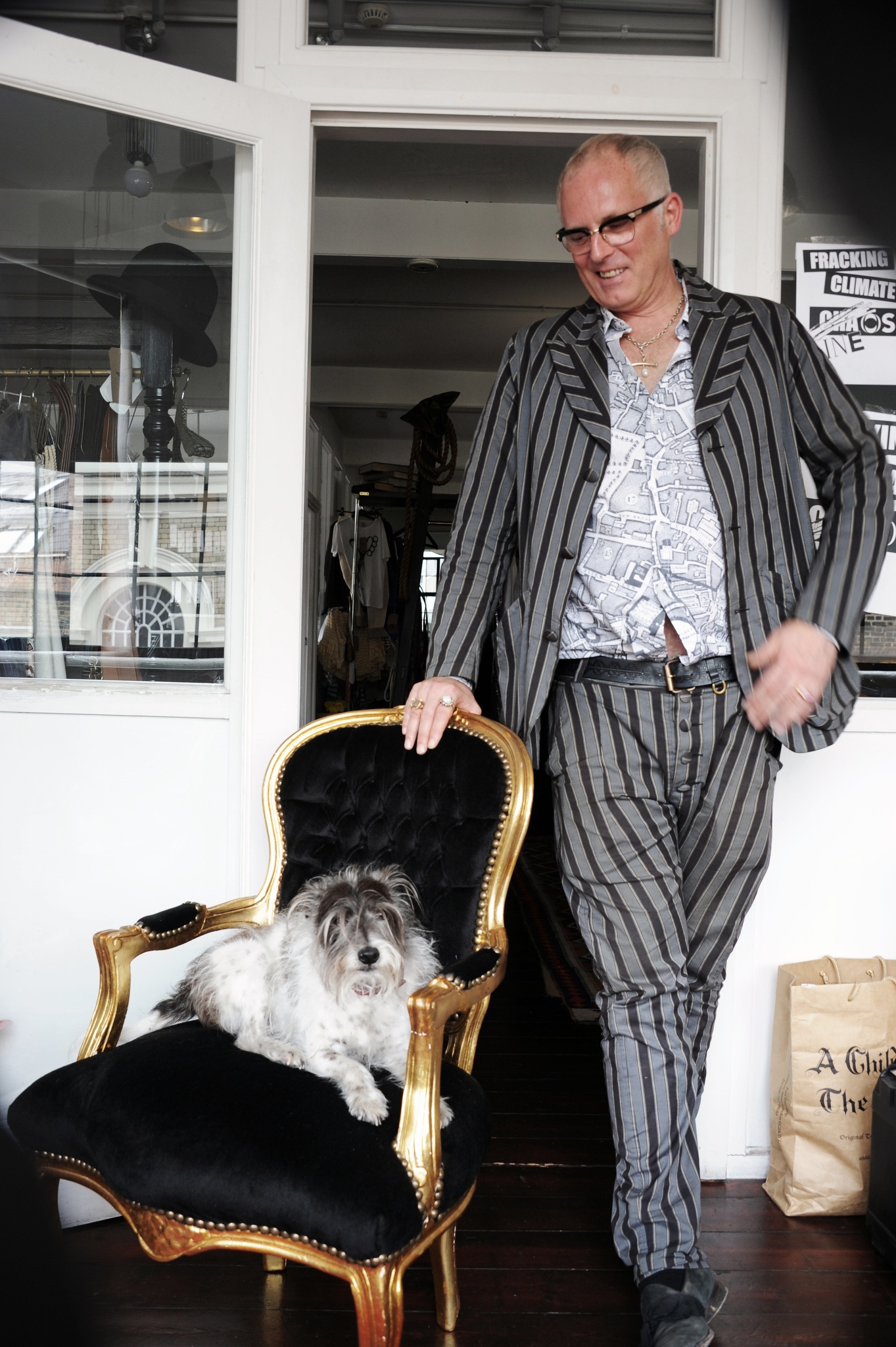 So he decided on a tribute of his own, and burnt about $7 million worth of memorabilia, including the original copy of the band’s debut single “Anarchy in the U.K.,” which was released in 1976. Other items to hit the bonfire that Corré lit on an ex-Navy minesweeper ship docked in the Thames in Chelsea were a red tartan bondage jacket and a “God Save the Queen” handkerchief.

In the film Corré also underlines the hypocrisy around his parents’ legacy. “My parents are not iconic. In the Seventies, they were called everything from scum and outsiders to geniuses and now my mother is considered a national treasure.”

Westwood is right there with her son through the film, at the bonfire on the ship and railing against fracking, a mechanical process that releases natural gas, petroleum and brine from deep in the ground — a cause that continues to be important to mother and son alike.

The dramatic memorabilia burning is the centerpiece of “Wake Up Punk,” which Corré has made with the director Nigel Askew. The film spends a lot of time with Westwood, who talks about punk, her approach to design, her dysfunctional relationship with McLaren and raising two sons alone while running a business — and fighting the anarchists’ fight.

The film, which is still being edited and is set to come out later this year, also addresses Corré’s rocky relationship with his famously difficult father, who died in 2010, and his close ties to his mother and half-brother Ben. It’s a humorous takedown of capitalism and the establishment as well.

There’s a lot going on, and the best bits by far are the ones with mother and son just having a chat. Westwood, with her creamy skin and flash of red hair, sets the screen alight with her matter-of-fact, frank admissions.

“Anarchy was me,” she says at one point, although her grit, charisma and determination were wasted on McLaren, who comes off as an impetuous, selfish man in the film. “Malcolm and I — we were both rebels, but he had a terrible ego,” Westwood adds. “I thought our relationship was over most of the time.”

She also talks about life as a single mother: She recalls clothing dye bubbling in a pan on the kitchen stove, and dipping the chunky wheels of Joe’s toy tractors in it and then rolling them over T-shirts. Those were the more tame designs. Other T-shirts came printed with obscenities or half-dressed men in intimate poses — and were duly seized by police. Her response? She just kept printing.

The only family holiday the four of them (Joe has an older half-brother Ben Westwood from Vivienne’s marriage to Derek Westwood) took was a hitchhiking trip to Anglesey, an island in Wales, where they ended up sleeping in a barn. The brothers plucked coins out of fountains and filled their pockets until they were soaking wet.

Corré is generous about his entrepreneurial, impresario, retailer father, even though the film points out that McLaren left his son nothing in his will. “He was a f–ked-up guy with lots of personal issues, but I am proud to be his son,” says Corré.

He added that one of the aims of the film is to set the record straight not only about his annoyance with the commercialization of punk but also about his relationship with McLaren in particular.

“There are bits of the film that make me cringe, but they are there because I think they answer important questions. At the time, when I decided to burn all of that stuff, it was an obvious provocation to people and I expected to be attacked for doing it. People accused me of trying to get back at my father over our relationship.

“Within the film, I answer some of those questions and it makes me cringe because it is very deeply personal and I can’t think what it bloody has anything to do with anybody else,” he continues. “Why should I put that in a film? But at the same time, I understand why it is important to answer those questions.”

Corré is very much his parents’ son, and not only on the anti-establishment front. He has taken up his mother’s twin mantles of sustainable design and activism and his father’s entrepreneurial drive, running the tailored clothing label A Child of the Jago.

In the early Nineties he cofounded the luxury lingerie brand Agent Provocateur with his former wife Serena Rees. In 2007, the couple sold a majority stake to private equity firm 3i for about 60 million ponds.

Corré left AP two years later, and took a minority stake in the color-cosmetics brand Illamasqua, which was sold to The Hut Group in 2017.

He’s kept A Child of the Jago small — deliberately — in a bid to remain outside the fashion system, be more sustainable and not have to stage runway shows or deliver newness multiple times a year.

“I think it is one of the things that I am enjoying the most, actually. But unfortunately it always gets shoved to the back of the queue because there are so many other projects that I am getting involved in. I always wanted it to be small because Agent Provocateur had hundreds of shops and was this great big machine that eventually becomes completely anti-creative and corporate,” says Corré, a handsome, imposing yet unfailingly polite and warm man who’s dressed in tailored Jago clothing and chunky rings made by his partner, Claire English.

He said A Child of the Jago was always set up to be a “very small, cottage-industry production and strangely enough, it is that 10 years later. People kind of recognize it as being the uniquely British thing. The Jago exists as one of those little places that you go to in London because you know you’ll find something that you wouldn’t find anywhere else.

He works with leftover fabrics from factories, manufactures in London with small, independent makers and tries to make prices affordable. “Once the fabric is finished, it is gone and you have to use something else. So you can’t wholesale it, because if someone says, ‘I want to buy 20 of those suits,’ we can’t because we can only make six.”

The label has had a shop on Charing Cross Road for five years, having moved there from Shoreditch where the rents became too high.

Next year, Corré plans to move to new premises at 48 Berwick Street in Soho. “It was the oldest factory in Soho, there since 1865 making chandeliers and lighting.” Corré bought it out of liquidation and is refurbishing it.

And unlike his parents’ various Chelsea stores — Sex; Too Fast To Live, Too Young To Die; and World’s End — it probably won’t be getting regular visits from angry policemen.