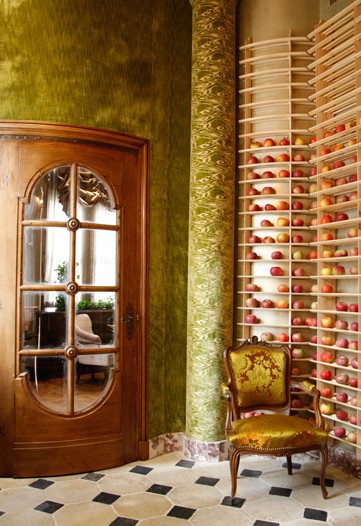 David Bouley hasn’t been sleeping well. Dressed in a white dress shirt and dark slacks, the renowned chef slumps in a velvet chair in the foyer of his new Bouley restaurant and yawns.

Too many ideas are swirling around his head related to the massive eatery, which is weeks away from opening. His days are consumed by meetings with inspectors, his staff, industry friends and potential clients. What’s more, the small spotlights on the ceiling are shining directly into his eyes. “They’re all coming out. I hate them,” he says of the fixtures. “I feel like I’m at the A&P at 2 o’clock in the morning after getting stoned when I was 20.”

But it’s not just the new Bouley that’s keeping the 55-year-old chef awake at night. He has no fewer than four other major projects in the works. Secession, his New York bistro in the old Danube space, served its first meal last week, and construction on Brush Stroke, his new Japanese joint on West Broadway, has begun. Both floors of his Bouley Bakery are being taken over by Upstairs, his more casual dining spot. A new retail/take-out operation will open in a 14,000-square-foot space on Varick Street in three weeks and eventually also house a restaurant. The existing Bouley, which will close in the next few weeks, will be turned into Bouley Market and, in the evening, a wine and cheese bar.

And then, after 11 years in the making, Bouley’s epicurean empire will be complete. “I’m done,” says Bouley. “It’s, like, after you have five kids you want more? Enough. My mother had nine, though.”

At the center of it all is the latest incarnation of Bouley — call it Bouley 3.0. The first was in business from 1987 to 1996. Six years later, the restaurant reopened in its current location on West Broadway and Duane. Bouley 3.0, which will start serving a day or so after Bouley 2.0 is shuttered, is just around the corner on Duane and Hudson.

The new 10,000-square-foot space is less a restaurant than a grand château that looks as if it was airlifted from France and dropped into TriBeCa. The fireplace is made from stone bought from the same family-run quarry used for the renovation of Versailles. Bouley is the only American to have it. The floors are oak and walnut parquet, a total of 42,000 tiny hand-carved diamond shapes. The heavy wooden doors herald from the 16th and 17th centuries, including the curved wood-and-glass front door, a holdover from the first Bouley. Downstairs, the bread oven is made with 18th-century firebricks modeled after one in Château de Chenonceau, the second-most-visited château in France after Versailles. Even the lightbulbs in the sconces were flown over from Europe. (A book documenting the 13 months of construction is planned for next fall.)

“It’s drop-dead gorgeous and terribly expensive,” says Tim Zagat, founder of the Zagat Guides, who’s one of the lucky few to have had a preview of the space. He compares the scale with restaurants such as Per Se or Del Posto, which cost an estimated $12 million in renovations.

The most impressive component is the vaulted, gold-leafed ceiling in the dining room. Artist Alexa Davis and a crew of five spent five months hand-painting it. “We’ve done a few restaurants, but nothing like Bouley,” Davis says. Her services are typically commissioned by wealthy Upper East Siders who want Venetian stucco finishes in their homes.

Davis says Bouley’s approach was more akin to that of a homeowner than someone developing a commercial space: “[Bouley is] very much involved in the process. Each room was probably done three times. We’d be working in a direction and get enough of it done so that he could see where it was going, and he’d be like, ‘No, I think we need more energy.’”

“There are certain things we asked of every artist we worked with and they went beyond our expectations,” says Bouley’s wife of two years, Nicole Bartelme, a Rhode Island School of Design grad who runs a philanthropic organization called Tribeca Native and also had a hand in the project. “What’s great is that David and I have very similar tastes, so things kind of dovetailed.”

The couple met in 1996, when Bartelme, now 40, lunched with a friend at the original Bouley. She and the chef, who had a reputation for being a hot New York City bachelor known for squiring beauties like Bernadette Peters, didn’t begin a romantic relationship until eight years later. In 2006, the two were wed during an extravagant five-day celebration in Tours, France.

But when it comes to business these days, Bouley stands alone. In the Eighties and Nineties, he had acrimonious splits with partners including Drew Nieporent (Montrachet) and the late Warner LeRoy (Bouley Bakery). Now, the four-star chef avoids working with other parties altogether — though the famed Japanese cooking school, Tsuji Culinary Institute, has a stake in Brush Stroke. “I choose to take the responsibility, which is a lot of work,” says Bouley. “It’s easy to scratch up a couple million dollars and let these people do this thing, but then I’m the one who’s got to move into somebody else’s show and I don’t want that.”

He declines to discuss whether the new Bouley was built with the help of investors, instead reiterating that he doesn’t have any partners. And, in spite of the current economy, he says: “We didn’t go that far over the budget. It wasn’t all controllable. The damn gold prices went through the roof and then the euro went right through the roof after.”

(Davis, the ceiling painter, attests, “David was in a little bit of sticker shock when we had to order 50 rolls of gold from Germany.”)

But this is clearly a man who is unafraid to spend money. The fabric used on a screen near the maître d’ stand cost $2,800 a yard, he says, and in his test kitchen back at Bouley headquarters, he has two black B&W Nautilus speakers at $30,000 a pop — one of which is busted and will cost $3,000 to repair. But out-of-pocket costs and the worsening recession don’t phase the chef.

“I opened up the original Bouley four weeks after Black Monday [in 1987],” he says. “I feel like [the current market crash] is good timing for me. Then we went though the Nineties, and then we had 9/11.” (There have been allegations that Bouley’s business survived 9/11 because he misappropriated $5.8 million in revenue from the Red Cross, which paid him to cook for Ground Zero workers. Bouley and his insurers settled the case out of court, and the chef claims it ended with his insurers “writing me a check to cover business interruption.”)

Which means a good night’s sleep is a long way off.