Cooper penned a memoir about his experience as a member of the first all-Black high school rowing team, which is also the subject of a new documentary directed by former Olympic rower Mary Mazzio.

Arshay Cooper and crewmates in a still from "A Most Beautiful Thing."

Arshay Cooper always knew that the story of his childhood — and participation on the first all-Black U.S. high school rowing team — was destined for the big screen.

“When you tell these stories, everyone’s like, ‘That should be a movie'” says Cooper. “But no one said or ever thought it would be a documentary.”

Cooper penned a memoir of his experience growing up on the West Side of Chicago in a neighborhood surrounded by gang violence, and the unlikely circumstances that led him to join his high school’s newly created rowing team in the late Nineties. “I would go and speak, and a lot of kids would ask me how do you become successful when you live in a neighborhood that doesn’t have a lot of resources? And I talked about how rowing was my way,” says Cooper. 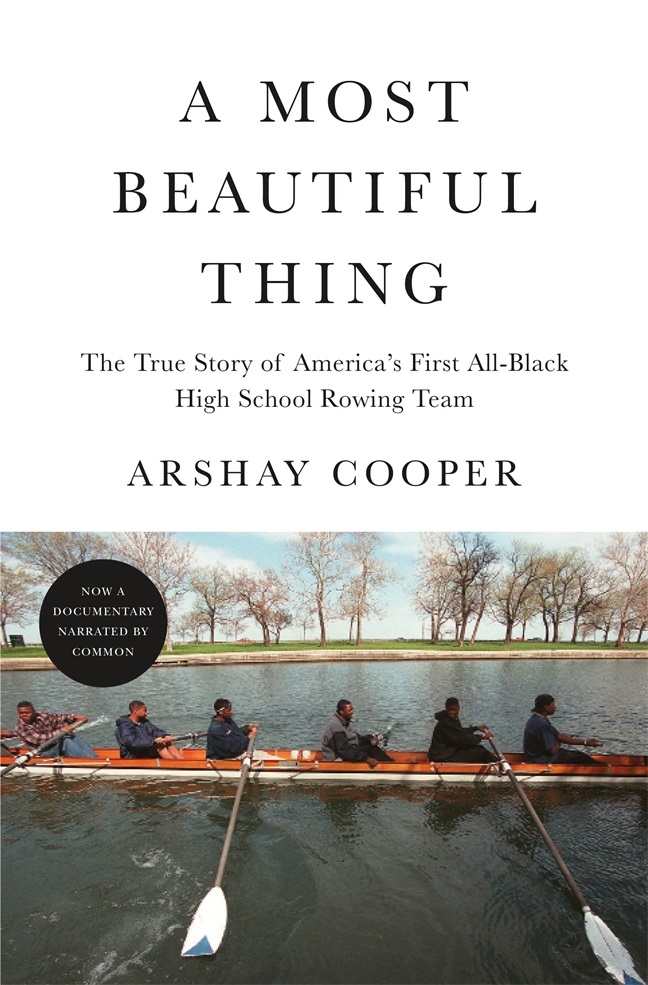 Originally self-published as “Suga Water” several years ago, the book was rewritten and republished with Flatiron Books as “A Most Beautiful Thing” to coincide with the release of an accompanying documentary directed by Mary Mazzio, a former Olympic rower. The film, which was  executive produced by Common (who also narrates) and NBA players Dwyane Wade and Grant Hill, was originally slated to premiere during SXSW in March. It will be released in select AMC Theatres (reopening dependent) on July 31.

In his book, Cooper, who was the captain of his team at Manley High School, reflects on the circumstances that allowed him and his teammates to thrive despite economic hardship, the effects of intergenerational family trauma, gun and gang violence, and racism inherent to the historically tony sport. Not to mention criticism from classmates more primed to value sports like basketball and football. Also, many of the guys didn’t know how to swim.

“I go to school one day and there’s this boat in the lunchroom, I have no idea what it is, and this woman asks me if I want to join the team, not knowing what it was. And I see this TV monitor of all white folks rowing and I said, no,” says Cooper. A friend convinced him to give it a chance; the prospect of getting to travel outside of Chicago (and free pizza) helped. 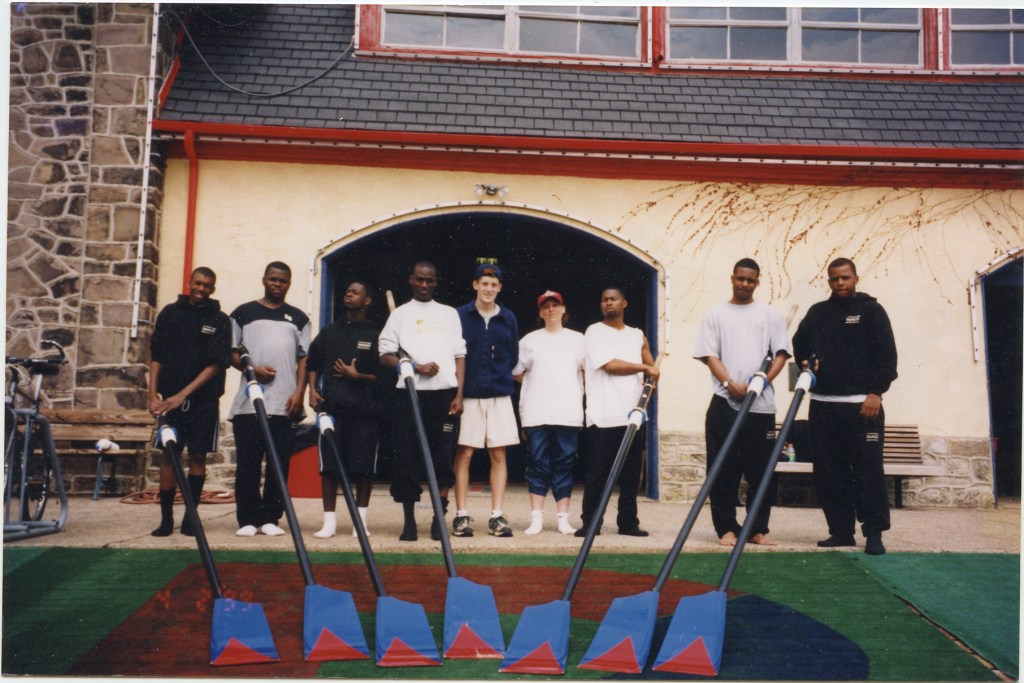 The Manley Crew in front of a boathouse in 1999.  Photo by Marc Mandel, courtesy of 50 Eggs Films

“It was such a wealthy, first-class affluent sport. We only raced with very wealthy high school kids. And there was this new world that we see that was different from ours: almost like a different America in the way that they lived and the way we live,” he says. “We joined this sport and we became a team, started traveling, and it was different guys from different gangs in one boat. [The book is about] how we bonded and became a brotherhood through the sport of rowing. And the impact that we not only made in our lives and our schools, and how the sport moves us.”

Mazzio read Cooper’s first telling of his story and tweeted out her praise. Cooper didn’t know Mazzio and was unfamiliar with her past work, but through that tweet discovered her impressive slate of documentaries, many with an activist angle, including “I Am Jane Doe” and “Underwater Dreams.” He realized that a documentary might be the best fit for telling the Manley crew team’s story onscreen.

“A movie can exaggerate and say different things, but to hear from the young men and the impact of what the water did for their lives and hear their voices, will be more impactful. So I reached out right away and was like, we should do something,” he says.

While the book presents the team through Cooper’s voice, the documentary brings in his teammates, their families, and coaches, including Ken Alpart, a former UPenn rower and options trader who funded and initiated Manley’s first crew team.

“We felt like our story will help people be inspired, no matter how hard it was for you growing up, or how poor, that you can get through it, you can be an entrepreneur, you can do something amazing. The guys were like, we’re all in,” says Cooper.

Also, it was a reason to get back in shape. The documentary recounts their collective high school experience, but also follows the group in the present as they reunite to train together again and compete in the 2019 Chicago Sprints regatta as adults in commemoration of the team’s 20th anniversary. They enlisted the help of Olympic rowing coach Mike Teti, who also appears in the documentary. 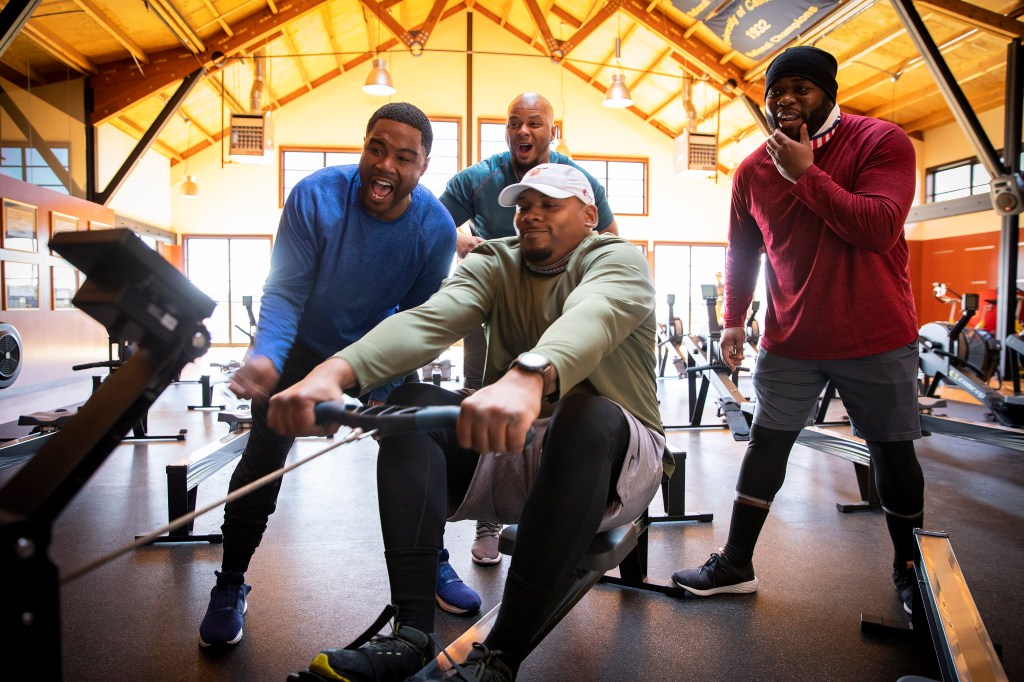 A still from the documentary.  ©2019 Richard Schultz, Courtesy of 50 Eggs Films

They recruit unlikely people to join the team and compete with them: several Chicago police officers. It was an unpopular idea with the rest of the guys at first —  but so was the initial idea of bringing teenagers from different neighborhoods of Chicago together into the same boat to row together as a team.

“If rowing can bring us together — we didn’t really get along — maybe we can have the same conversation with the cops,” says Cooper. “We need to have a conversation, and we need to know each other. And I know it’s not going to happen at the police station, but I know sports unite people, so I’m going to use the sport to do it.

“If I can get them to see that Preston wears his hoodie and sags his pants, but he’s still one of the best entrepreneurs on the West Side, that’s awesome. If I can get them to see that Malcolm calls his son every 10 minutes and parents do care about their kids that are out there, then maybe you’d know that people love their kids. If you knew Alvin got in trouble before, but he’s one of the greatest teachers and coaches and he hires people who need opportunities, then maybe they’ll respect us,” adds Cooper. 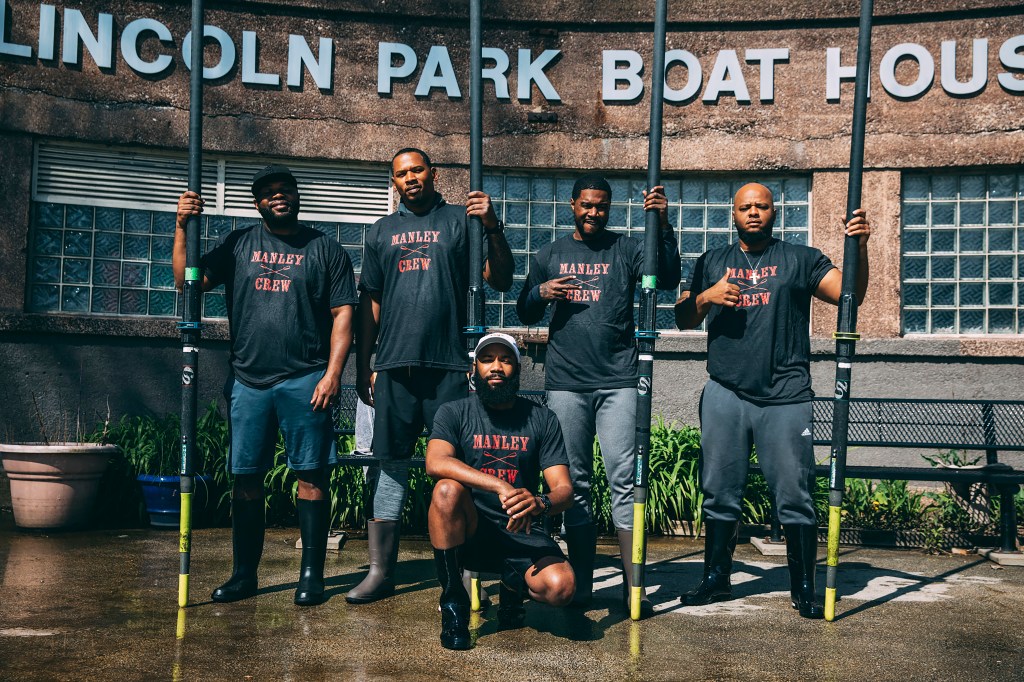 A still from the documentary.  Clayton Hauck, courtesy of 50 Eggs Films

After high school, Cooper participated in AmeriCorps and then went to culinary school to become a chef. He currently lives in New York with his wife and young daughter, and works as a motivational speaker and activist, helping to recruit new athletes into rowing and working with boathouses and college coaches to bring more diversity to the sport. He also works to help create the framework — raising funds, introducing college readiness programs and emotional learning — to support inclusivity within teams and boathouses.

“The number-one challenge is money — access. Soccer is expensive now to play for inner city kids, imagine the sport of rowing where the boat’s the same price of a car. And then you have to travel, and to get to some of these colleges where the sport of rowing is, we have to make sure the academic support is strong,” he says.

There’s also the challenge of transportation — how to get young athletes to the water, and in the case of Chicago, getting them there safely — and when they do get there, making sure boathouses are welcoming. “Rowing’s not just a white sport; it’s a wealthy white sport,” says Cooper, describing many boards as old, white, male, and resistant to change a traditionally elitist sport.

“The ultimate goal is to make sure that these rowing teams reflect the diversity in their cities,” says Cooper, who has his eye on an even bigger win: a more diverse Olympic rowing team. “In the 100-plus years of rowing, there’s only been five [Black] Olympians,” he adds. “But now there’s more and more Black folks rowing.”