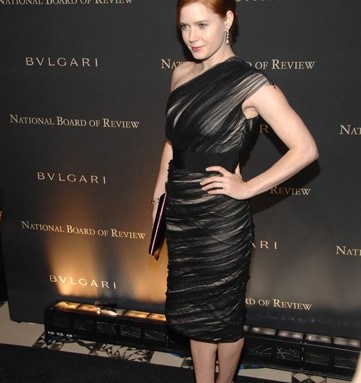 Just three days after the Golden Globes in Los Angeles, stars from this year’s hottest films got gussied up again for the National Board of Review awards dinner in New York, sponsored by Bulgari. But no one was complaining.

It’s just nice to be recognized for their work, the actors said. And they get to see so many of their idols. But “Doubt” star Amy Adams, by now considered a pro on the awards circuit, admitted that for her it’s all about “the ritual burrito at the end of the night.”

She had a long way to go on Wednesday as 20 trophys were handed out over three-plus hours at Cipriani 42nd Street. Meryl Streep kicked things off, presenting her “Doubt” costar Viola Davis with the Breakthrough Performance trophy and, what must be for an actor, the ultimate compliment. “[Her performance] annhilated me,” Streep said of her scene partner.

In the wings, Salma Hayek, who accepted Best Supporting Actress on behalf of “Vicky Cristina Barcelona” star Penelopé Cruz, whispered incredulously, “I have to go up after Meryl Streep?” But Hayek held her own, ribbing her absent friend for not leaving her instructions on who she’d like to thank. “I would thank the caterers because the food in Spain is always fantastic, and the grips because they had to work after lunch, after wine…and Woody Allen. He is the one person I know who is almost as hypochondriac as Penelopé.”

Emcee Whoopi Goldberg then mispronounced Josh Brolin’s name which provoked the “Milk” actor to tell the crowd, “Bra-lin. That’s how f—ing famous I am.”

But there was no mistaking “Gran Torino” director and star Clint Eastwood who introduced Best Original Screenplay winner Nick Schenk (who wrote “Gran Torino”) by saying, “This is one of the scripts I changed the least in all of my history.” The craggy screen icon later won the Best Actor prize and said that he got into acting when a high school friend persuaded him to take drama class. “Everyone was playing chicken and walking around the room. But there were 30 great looking girls and five guys. I said, ‘You know, this class needs me.’”

The evening wore on, Anne Hathaway insisted that her award for Best Supporting Actress in “Rachel Getting Married” “must be a fluke” and everyone, it seemed, had something to say about sleeper hit “Slumdog Millionaire.”

In fact, Julian Schnabel had more to say about that film than he did Brolin’s performance in “Milk,” which he was supposed to be touting. “Thanks, Julian. I feel like I was in ‘Slumdog Millionaire,’” Brolin said accepting Best Supporting Actor.

“Slumdog” director Danny Boyle had expressed similar concerns earlier in the evening. “I thought that I’d have to do the big speech, you know, breathe but don’t inhale, what they say about L.A. But I didn’t.”

Indeed, it seems the poised and gracious Patel has his priorities straight. Accepting his trophy, he said, “I should be in school right now.”