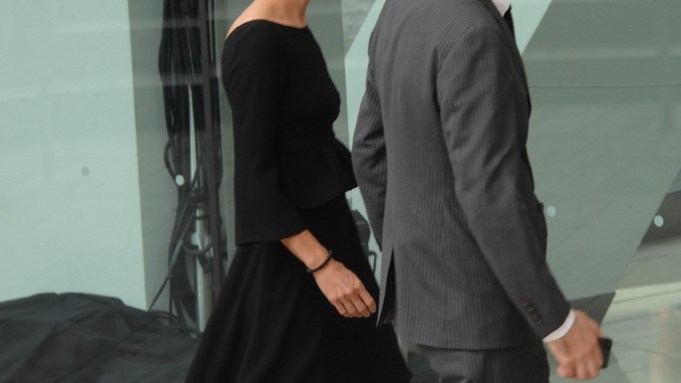 How does one feel after leaving a Nora Ephron memorial? Woefully inadequate. And the much-acclaimed writer, director and producer, who died late last month, probably would have gotten a real kick out of it.

There was an all-star cast of speakers (Meryl Streep, Tom Hanks and Rita Wilson, Martin Short, Rosie O’Donnell and Mike Nichols, among others), a perfect assortment of juicy and witty anecdotes, and even a recipe for brisket in the program: well-trimmed, prepared with garlic cloves, olive oil, diced tomatoes, red wine, carrots and just the right amount of salt and ground pepper to taste.

RELATED STORY: Nora Ephron, a Woman of Letters, Dies at 71 >>

Ephron clearly understood that happiness required a good barb and an even-better dish. Food, in fact, played a role in Monday’s ceremony. There were more references to butter than one cared to remember (Ephron, after all, once said that it was her religion if she had to choose one), and the speakers regaled the crowd with funny stories of lousy pizzas in Naples, the quest for pineapple juice that’s up to Ephron’s standards (go canned, not fresh) and her musings on chocolate, including the astute observation that “Hazelnuts are what’s wrong with Europe,” even though her sister Delia Ephron later took credit for that moment of brilliance.

Short recalled the time when his wife Nancy died. “Nick [Pileggi, Ephron’s husband] and Nora showed up with food and commiseration, and they did the second night, and third night,” Short said. “On the fourth night, she arrives with a giant plate of fried chicken. I said, ‘Nora, it’s just the kids tonight and we have so much food already.’ She handed me the platter and said, ‘And now you have more food.’ That was Nora’s style.”

Columnist Richard Cohen admitted how deeply impressed he was by the fact that Ephron was always a step ahead of everyone else. “If I had the book, she had the galley, and if I had the galley, she had the manuscript, and if I had the manuscript, she knew the author,” he said. “It was either someone who had sought her advice, had been at college with her or worked in the smoked fish section at Zabar’s.”

“She was the most fantastic blend of joy and cynicism,” Jacob Bernstein, one of Ephron’s two sons, said, adding that among the things he will miss about his mother was “her roast beef with Yorkshire pudding, the way she had at least 10 different kinds of jam in her refrigerator and how we practically cried together upon finding out that Pat Buchanan would no longer be a regular on Rachel Maddow.”

He also noted Ephron’s penchant for taking young women writers under her wing. “She understood that she could give help to them, and, so long as she was friends with them, would have a nice army with whom to make fun of all the writers who were succeeding while being completely talentless,” Bernstein said, recalling a particularly poignant anecdote one such writer recently shared with him. “My mom discussed ‘Fifty Shades of Grey’ with her,” he said. “[She told her] ‘Don’t you think in 10 years, we will find out it was written by 15 people drunk at a party?’”

O’Donnell had the crowd equally in stitches when she read Ephron’s hilarious essay “I Hate My Purse.” So did Delia Ephron with her more personal stories. “My first memory of us, Nora bit into a tomato in such a perfect way as to be able to squirt the juice into my eye,” she said. “She told me Santa Claus wasn’t real when I was about six and, in college, was the one I called crying for consolation when my planaria died.” The planaria — a flat worm whose nature is to regenerate a head or tail if lost — would have been much better had Nora taken care of it. She would have turned said worm into a great “gaffer” and even cast it in one of her movies. “Then, for the rest of its life, the planaria would walk around saying, ‘Nora Ephron believed in me when I was a headless planaria.’”

“She pulled a fast one on all of us,” Streep said. “And it’s really stupid to be mad at someone who died, but somehow I have managed it.”

Ephron had kept her acute leukemia from all but those closest to her, and Streep recalled how, last winter, she presented her at the “Directors Guild of America Honors,” and Ephron, in turn, toasted the actress at the annual “Kennedy Center Honors.” “We promised each other that this would be the last in a long series of such events, and that we would never, ever pay tribute to each other, ever again,” Streep said. “She made me promise this, knowing that she already put me on this list [of speakers]. I am so privileged, and so pissed off, and so honored and inept, and, at the same time, I can’t help thinking that this is exactly what she intended.”