Sarah Jessica Parker shines in Nina Ricci at the New York premiere of "Sex and the City: The Movie." 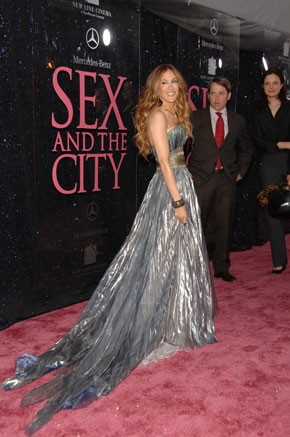 After many across-the-pond premieres, the much-anticipated “Sex and the City: The Movie” made its Stateside debut Tuesday night at New York’s Radio City Music Hall. And not a moment too soon, it seemed, for the throngs of fans (many female, in groups of four) who braved inclement weather hoping to catch a glimpse of their screen idols — Sarah Jessica Parker, Kim Cattrall, Kristin Davis and Cynthia Nixon — walking the sparkly pink carpet. Adding to the hysteria were cast members Chris Noth, Jennifer Hudson, Jason Lewis and a host of stars including Ashley Olsen, Jerry Seinfeld, Bette Midler, Fergie, L’il Kim and Eli Manning.

“I said to Sarah Jessica, ‘You are now Elvis,’” said Narciso Rodriguez, surveying the screaming fans (his designs appear in the movie).

“I am going to get on my hands and knees tomorrow morning and darn every hole before I return it,” she said at the pink-themed after party at MoMA. “I’m just glad I got this dress before Carrie did.”