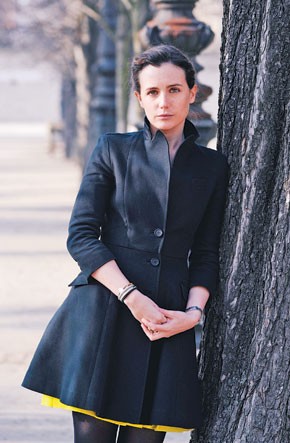 Despite the fact her father is world-famous designer Philippe Starck, Ara Starck didn’t inherit the gene. “I’m a painter, I’ve never done design,” says the 29-year-old artist, who has a solo show opening May 21 at Paris’ Artegalore.

That said, she has inherited her father’s explosive imagination — even a 10-by-13-foot canvas is too small for her work, she says.

“It makes me claustrophobic,” says Starck, who spent four years at London’s Slade School of Fine Art, before moving to a New York loft, where she spent a year “living and sleeping in paint,” as she puts it.

Now back in her native Paris, Starck developed a new technique to give herself more freedom. The results will be on show at her upcoming exhibit, which comprises 12 portraits inspired by circus characters.

Starck’s self-invented process is multistep: First, she paints several images of the same subject, then the images are broken down via a scanning method, and finally, a lens is applied to the painting. The effect for viewers is motion rather than a static, two-dimensional canvas.

Walking in front of her paintings, visitors will see different movements depending on their vantage points. “Two people will see two different things and can tell each other what they are seeing,” she says.

Meanwhile, a 1,500-square-foot oil painting by Starck has just been hung at the Meurice Hotel’s Dali restaurant in Paris, for which her father did the decor. The collaboration, however, was hardly nepotism: “We don’t believe in working with the family,” says the petite brunette as she sips espresso.

In fact, she submitted her idea anonymously to her father when she found out he was looking for an artist to take care of the ceiling. And though her painting corresponded exactly to the theatrical atmosphere he wanted, a very surprised Starck père took a couple of days to hire his daughter and to congratulate her.

“He is not one to drop warm compliments, unlike most fathers would do with their daughters,” she says.

Meanwhile, Starck does not mind more frivolous occupations. A big fan of Miu Miu, she hardly misses a show, and a music lover, she also likes hopping from concert to concert. Says the painter, “Other artistic mediums are often a trigger to visuals I will make mine.”