A Titanic Controversy Over a Kimono

Family of Titanic survivor Lady Duff Gordon are disputing an auction house’s claim that a kimono it will sell was worn by her on the night the ship sank. 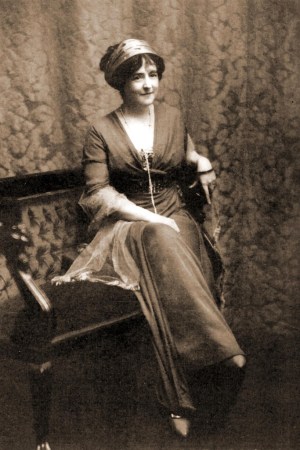 Family members of Titanic survivor Lady Duff Gordon are disputing a New Hampshire auction house’s claim that a silk kimono it will soon auction was worn by Duff Gordon on the night the ship sank.

That item will be among the 180 pieces of Titanic memorabilia to be auctioned online April 19 to 26 by RR Auctions, an Amherst, N.H.-based company. The firm’s Web site described the celandine full-length robe as what Duff Gordon wore in the lifeboat she escaped to from the Titanic and later aboard the R.M.S. Carpathia. It also notes how the garment has been the subject of debate over the years. With a minimum bid of $5,000, the kimono in question is expected to go for between $80,000 and $100,000, according to RR Auctions vice president Bobby Livingston.

“We take authenticity very seriously. This is a very controversial item ever since it’s been on the market,” Livingston said. “It is well discussed in Andrew Wilson’s new book ‘Shadow of the Titanic.’ There are about 10 pages about the kimono but it is inconclusive.”

He continued, “We have not seen any evidence to change our experts’ minds. They have offered nothing to call the kimono into question,” he said. “One thing that is clear is the family has been desperate to buy it back since 2007.”

Lady Clare Lindsay and her sister Caroline Blois insisted Monday they have no financial interest in the kimono — they just want to set the record straight for historical accuracy. They said the garment belonged to their grandmother Esme, Countess of Halsbury. “I would hate for someone to buy something thinking it is one thing only to find out that it didn’t turn out to be that at all,” Clare Lindsay said.

A historian at The Museum of Costume in Bath, England verified that the kimono was not a Lucile creation and another textiles expert, whom Lindsay declined to identify, said the pattern on the garment was a well-documented one used by Fortuny after World War I — which would have been at the earliest several years after the Titanic sank.

An established fashion designer, Duff Gordon designed under the label Lucile and owned boutiques in London, Paris and New York. Business in New York was why she and her husband, Cosmo, booked a cabin on the Titanic. Ironically, they were registered under a false name so as not to draw attention to Cosmo Duff Gordon. As it turned out, they were lambasted by the press for escaping on Lifeboat 1, which was equipped to hold 40 but only took 12 (most of whom were crewmembers.) He was criticized for years for allegedly bribing the crew in their boat not to go back to try to save any swimmers.

WWD reported on April 16, 1912 that both of the Duff Gordons were safe. WWD’s Edith Rosenbaum, who was on the Titanic and survived in another lifeboat, noted in an article in the paper on April 19, 1912, how Duff Gordon “made her escape in a very charming lavender bath robe, very beautifully embroidered, together with a very pretty blue veil. She told me my clothes had been her admiration all the way over on the boat, and we exchanged compliments about our costumes and ‘swapped’ style information closely after getting on the Carpathia.”

In a twist of fate, given Sunday’s centennial anniversary of the ship’s sinking, a cache of letters and documents belonging to the Duff Gordons was discovered last week by two interns in a London law office. An itemized list of the designer’s belongings that were lost at sea — $400,000 worth of clothing and accessories — may provide further clues about the kimono. Clare Lindsay said she hopes to see that document, which was presumably for insurance purposes, later this week as well as two of her letters that referenced the tragedy in detail. Those items were recently returned to Sir Andrew Duff Gordon, Cosmo’s great-nephew.

According to one published report, the designer had the wherewithal after the ship hit the iceberg to unlock the couple’s security box to retrieve a pair of diamond earrings, a diamond necklace and turquoises. It also offered a detailed account of her change of clothes. “I took off my nightgown which was underneath my padded dressing gown, put on my chemise and my thick silk drawers and my woollen drawers. Then I put on a warm silk vest with long sleeves. I deliberately thought I would not put my corsets on in case that if I got into the water I should not be able to swim, and put back my warm dressing gown and on top of that…my warm purple dressing gown, and then I put on my little warm motor hat.”

Years later, she dodged another ill-fated voyage by having to give up her reservation on the Lusitania at the last minute because she was unwell. That too was first reported in WWD.

How the kimono wound up in a New Hampshire auction house is a tale in itself. Randy Bigham, who has just self published “Lucile — Her Life By Design,” was given the kimono by Lord Anthony Halsbury, Lindsay’s father and Duff Gordon’s grandson. In 2001, Bigham sold the garment to Titanic historian Phillip Gowan for about $5,000 and its provenance was disputed five or six years ago. In hindsight, Bigham said Lord Halsbury “was very elderly and possibly he meant it to be an extended loan.” Contrary to the agreement Gowan allegedly had with Bigham, the kimono was displayed in a few museum exhibitions. Unaware that the garment had been given to Bigham, once the family learned that they were eager to get it back, Bigham said. At one point, Gowan considered selling it back to him but that plan fell through, Bigham said.

Bigham said he tried to compensate by paying Lindsay $5,000. He too notified RR Auctions that the kimono’s design was not something that Fortuny introduced until after WWI. Oddly enough, some of the material RR Auctions is using to authenticate the garment’s use was initially verified by Bigham. But he has since learned that he was mistaken, he said.

Clare Lindsay and her sister Blois are ready to leave the situation to rest, “Sadly, it is not in our possession. And it’s so incredibly difficult to do anything legally in the U.S. from the U.K. But we’re not even considering it,” Lady Clare Lindsay said. “It’s out of our hands now sadly. They have been given the right information. It’s up to them.”