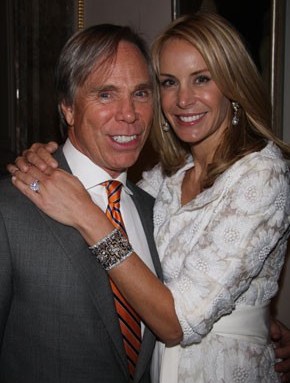 “If I’d known it was going to be this great, I would have been engaged a lot earlier,” said Tommy Hilfiger as he and his fiancée Dee Ocleppo were honored at a party given Monday night by Leonard Lauder at the Neue Galerie in Manhattan.

A crowd of about 200 gathered to celebrate the upcoming marriage set for Aug. 8 at Hilfiger’s home in Mustique in the West Indies. Among the guests were Terry Lundgren, Vera Wang, Kenneth Cole, Harvey Weinstein, Russell Simmons, Clive Davis, Roger Waters, Anna Wintour and William and Aerin Lauder.

Leonard Lauder, chairman of the Estée Lauder Cos. Inc., said he had two words of advice for Hilfiger: “Yes, Dee.”When asked why he decided to throw a party for Hilfiger, Lauder recounted his more than 15-year relationship with the designer, who was Lauder’s first licensee.

“We’ve been partners from Day One,” Lauder continued, describing the growing closeness of their relationship.“It’s been a love affair all those years. We’ve finished each other’s sentences,” said Lauder. “I was worried about him being single. When I met Dee, I thought, we need to get this engagement going right away.”

“He hit the jackpot,” said Weinstein.

According to Ocleppo, the ceremony will be held by the sea in the backyard of Hilfiger’s island home, which is called Palm Beach. The event will be limited to just family and their six shared children.

A “celebration” of the marriage will be held at a reception Oct. 17 in the ballroom of the Plaza Hotel in New York.Ocleppo, an American former model who had lived in Monte Carlo and Paris, first met Hilfiger in Saint-Tropez back in July 2005. When asked how they first met, Ocleppo recalled going to a bar to get change for a 500 euro note to buy her son something off the beach and unexpectedly got introduced to Hilfiger through his yoga instructor. “My son was being very greedy that one day at the beach and kept wanting me to buy everything from tattoos to peanuts,” said Ocleppo. “Had I not gone to the bar to get change, I would have never meet him.”

The couple connected over talking about their children, later discovering that both were afflicted with Asperger’s syndrome.

“We got into a deep conversation about that which sparked the initial conversation,” said Ocleppo. “We were more like friends in the beginning and then developed over time in a nice way.”

Hilfiger said he had to do something to “lure her back to the States.”

At the reception, there was no shortage of Hilfiger boosters, among them Lundgren, Macy’s Inc. chairman, chief executive officer and president.

“His business is on fire,” said Lundgren. “This is a perfect example because this is a brand that’s consistent, new and fresh.”

Hilfiger was one of the main inspirations for hip-hop mogul Simmons.

“He was one of the first supporters of my clothing company about 18 years ago so he’s always been a dear friend,” said Simmons. “He’s helped me in many ways.”

Wang’s reaction was one of relief. “It finally happened and he stepped up to the plate,” she declared.