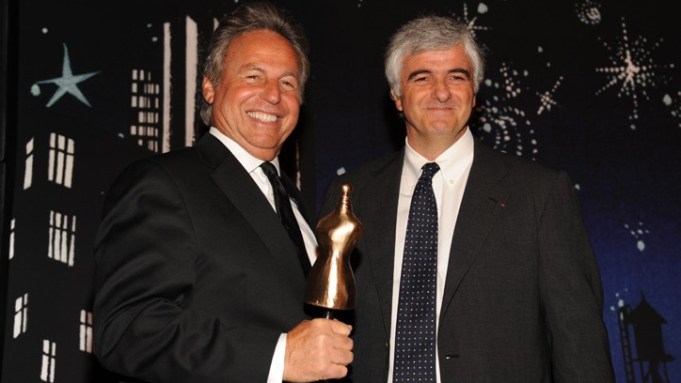 “I’m blown away by the beauty of this room,” said Kevin Burke, president and chief executive officer of the American Apparel & Footwear Association.

He was admiring the ficus trees atop all the tables and the big crowd of 690 fashion executives, designers, retailers and socialites at the Grand Hyatt on 42nd Street in Manhattan for the AAFA’s American Image Awards on Wednesday, which raised $1.1 million for the Prostate Cancer Foundation.

Ruben Toledo, who with his wife, Isabel, received the Fashion Maverick Award, added to the pageantry by creating a large New York-centric “pop-up book” stage set depicting a moonlit skyline, and creating the art for the invitation. Upon receiving the award from Whoopi Goldberg, he said, “Oooh! It’s really heavy like an Oscar. It’s gold.” To which Goldberg responded, “Yeah right, and I’m a natural blonde.”

David Koch, upon receiving the Humanitarian Award, told the crowd, “I sit on 27 nonprofit boards and of all them, cancer research and particularly prostrate cancer research is the most important.” Twenty years ago, he discovered he had advanced prostate cancer and thought he didn’t have long to live. But surgery and new drugs made him a survivor. “Those of us who are well off financially should have a deep feeling of responsibility for others less fortunate,” Koch said.

Neiman Marcus received the Retailer of the Year Award, which was accepted by Neiman’s Jonathan Joselove; William Rast was honored as Brand of the Year, and Ugg Australia was Footwear Brand of the Year and cited for 12 years of consecutive double-digit growth.

“While we don’t cure disease, this industry is one of the most benevolent,” said Mark Weber, ceo of LVMH Inc. and chairman and ceo of Donna Karan International, who received the Man of the Year Award, presented by LVMH group managing director Antonio Belloni.

“The company pays me for my mind. I throw in my heart for free,” Weber said, noting that as an American working in Paris, he felt lonely and far from home at times. But one day gazing at the Eiffel Tower, tears came into his eyes. “I realized what I had become part of. I did alright for a kid from Brooklyn.”