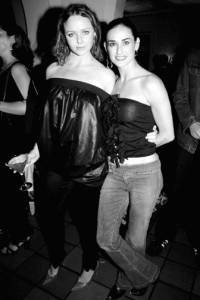 “It’s a good place for a party,” Stella McCartney decided as she walked the halls of the Chateau Marmont, where every nook from the lobby to the garden to the suites above was crawling with fashionistas at a party to celebrate the new Absolut Stella campaign on Thursday. Downstairs, temporary Chateau residents Jacqui and Peter Getty watched as guests, including Thandie Newton, Josh Hartnett, Tobey Maguire, Demi Moore and Vincent Gallo, filed into “their” living room.

“Oh, put a coaster down, will you?” Peter Getty joked.

Meanwhile, in the garden, Tom Ford chatted with Lisa Eisner, then slipped an arm around fellow designer Jeremy Scott, much to the delight of Ford-watchers on the balcony.

But when Peggy Moffat put in an appearance, it was McCartney’s turn to play the wide-eyed fan.

“Of course, I know who you are,” McCartney gasped. “I don’t know if you know who I am.” Then she bummed a cigarette and both were kicked out of the lobby by security guards.

Earlier in the evening, Shiva Rose McDermott, Jessica Capshaw and Ever Carradine hit the Rodeo Drive Chanel boutique for the launch of its new fragrance, Chance, hosted by Chloë Sevigny and Christina Ricci, who is no stranger to the boutique.

“The salesladies joke with me every time I come in,” she admitted. “They say, ‘Oh, it’s your weekly visit?’ It’s horrible, really embarrassing.”