Fashion week bashes: Puffy packed ’em in at the opening of his Sean John store, a Tory story at Bergdorf’s and lots more, uptown and down. 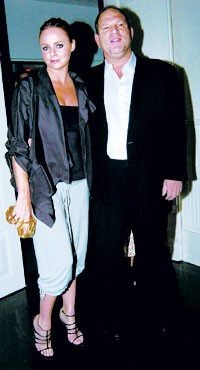 Sean “P. Diddy” Combs still knows how to pack ’em in. His Sean John store opening on Thursday night was the star-powered centerpiece of an evening stretched thin with fashion week parties all over town.

In between checking his Blackberry for incoming e-mails, the man, the myth and the legend greeted guests wearing sunglasses, a Guido tuxedo, a pin that read “Black Folk Must Vote,” and a hulking diamond cross set on an equally impressive diamond chain. “I don’t discuss my carats or the price tag,” Puffy huffed.

Otherwise, the host was in great spirits, pumping his fist in the air and shouting, “This store is serious! I’m taking it to Harlem!” He even embraced Star editor

Bonnie Fuller, who arrived with her daughters, and posed for pictures with everyone from Zac Posen to Fern Mallis.

Speaking of bling, you could hold a figure-skating competition on Nicky Hilton’s engagement ring. How many carats was she wearing? “Enough,” was all she would say. Hilton swanned in with Bijou Phillips and an “Entertainment Tonight” crew. She’s their fashion week correspondent, though the job is taking its toll. “There’s a lot of waiting around,” she sighed.

Also along for the evening was her sister, newly minted author Paris, who, chatting nonstop on her rhinestone-encrusted cell phone, was already an hour late to her own book party at Lot 61 for “Confessions of a Teenage Heiress.” Was she aware of the rival book party for Amy Fine Collins’ tome, “The God of Driving”?

“I don’t even know who that is,” sniffed Paris.

Naomi Campbell, fresh from Tommy Hilfiger’s runway, made a dramatic entrance in a thigh-skimming dress. “It’s Zac — aka Puffy now, right?” she said, as she ogled a white mohair pillow. “I want this,” she barked to no one in particular, as she grabbed for it. “I want to shop, girl.”

Liya Kebede arrived with sudden fashion week fixture Jeremy Piven and another friend. When someone pointed out she was part of his entourage, she laughed. “I guess I am.” But the rest of the guests were really P. Diddy’s entourage: Venus and Serena Williams, Ludacris, Tommy Mottola and Thalia, Vivica Fox, Wyclef Jean, Fonzworth Bentley and Fergie of the Black Eyed Peas, who adopted the role of fashion critic for the evening.“It has been about the lower stomach for so long and now it’s about the upper stomach,” she theorized. “Now we can eat a little bit more.”

But the evening’s true fashion moment occurred when Calvin Klein arrived in a swirl of flashbulbs and held court at the store entrance with Tommy Hilfiger and P. Diddy. As the trio posed for the paparazzi and slapped each other on the back, Hilfiger leaned over to whisper in Puffy’s ear, “We’ll be at the Maritime later.”

Meanwhile, at Bergdorf Goodman, Tory Burch celebrated the premiere of her fall collection for Tory by TRB with 350 of her chic, uptown pals, all of whom arrived wearing her line. There nibbling on watermelon sorbet were Aerin Lauder, Samantha Boardman, Josh Patner, Gigi Mortimer and Eva Lorenzotti, just in from her summer in Sardinia.

“Tory has so many friends that if everyone bought one shirt, she’d get rich,” said Alex Kramer, who came in a sleeveless orange-and-white print TRB top that three other women also had on, including Jennifer Creel.

“I hate her!” Creel groused cheekily, as she gazed at Kramer across the room.

Creel then hopped to Collins’ book party at Christie’s, where the author admitted she was not only familiar with Paris Hilton, but knew about her new book as well. “I guess we’re both offering confessions of what’s underneath the glamorous exterior,” said Collins, who made it through the evening minus a fainting spell like the one she had at Plum Sykes’ book party in the spring. “I’m ready for Plum to swoon in my arms,” added Collins. “If you see her, tell her I’m waiting.”

A few blocks away, Pollini honored Rifat Ozbek with a bash at Henri Bendel hosted by Sally and Rufus Albemarle, and Mica and Ahmet Ertegun, among others. Downtown at Sky Studio, location of the Stella McCartney and Adidas bash, guests packed so tightly into the steaming hot elevators that some feared they would faint. Mischa Barton was overheard trading hair tips with Steven Cojcocaru and complaining about the difficulty of maintaining a blowout. Once inside, guests slurped alcohol-laden ice cones and milled about the loft space, which was transformed into something resembling an upscale gym. Although the new line by McCartney for Adidas is designed for hard-core athletic activity, models sporting the collection smoked and drank as they “worked out” on bikes and treadmills set up on the roof.

The life of the party, however, was Bloomingdale’s honcho Kal Ruttenstein, who praised the line.“I spent three hours with them today going over the collection when I was supposed to be attending shows,” he said.

Earnest Sewn, the new denim line from Scott Morrison celebrated its launch at its showroom in the Meatpacking District. With The Donnas manning the DJ booth, hipsters came out in droves to mingle with Julio Iglesias Jr., Alex von Furstenberg and Ally Kaye and Theodora and Alexandra Richards. Other entertainment included a live feed from the Kentucky factory where the boutique jeans are made, which had one guest wondering, “Is this supposed to be glamorous?”

Up the street at the Maritime Hotel, Vitals, the new men’s magazine (like WWD, owned by Advance Publications Inc.) held a bash at Cabanas. Among those toasting its publication were Janet Jackson, Christina Ricci and Adam Goldberg, Patricia Herrera and Gerrity Lansing and Klein, who was making the rounds. Hilfiger’s after party at Hiro kept guests bouncing between the hotel’s floors, before the late-night crowd headed to Bungalow 8.

The night’s lineup went right along with P. Diddy’s secret to a good party, which he offered earlier in the evening: “It’s all in the mix.”

— Alison Burwell and Marshall Heyman with contributions from Melanie Kletter