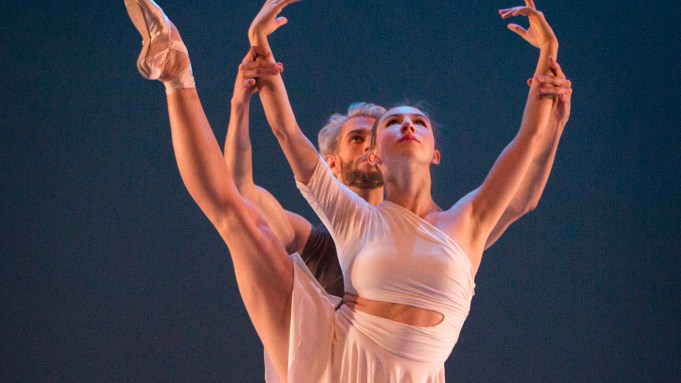 The “pastiche” staging, as the 28-year-old calls it, features original choreographic works by four createurs — organized by Simkin with the intention to “explore something with a more European [sensibility] of dance.”

“It’s less based on geometry and more a feeling of emotional connectedness to the audience…it’s not just dancers but it’s the whole spectacle,” he says.

As such, his fellow ABT dancers, including Isabella Boylston, Alexandre Hammoudi, Hee Seo and James Whiteside, as well as guest artist Céline Cassone of Les Ballets Jazz de Montréal, participate in high-voltage, emotionally evocative works. The dancers have such a following that the “Intensio” six-day New York run has nearly sold out.

Simkin’s “Intensio” concept made its first round in 2009 with a billet of established pieces by the likes of Balanchine and Petipa. The present iteration — with contributions from Gregory Dolbashian, Alexander Ekman, Annabelle Lopez Ochoa and Boston Ballet choreographer-in-residence Jorma Elo — made its debut in July at the Jacob’s Pillow Dance festival. The program — the first to be overseen by the Joyce’s new production arm Joyce Theater Productions — has since traveled to Houston and Buenos Aires.

Simkin, who joined ABT as a soloist in 2008 and rose to principal in 2012 — is something of an anomaly in the ballet world. He was born in Russia, and raised in Germany by ballerina parents. Rather than attend ballet vocational school, he was trained with at-home lessons while enrolled in a traditional academic program.

Simkin says this background has informed his unconventional approach to the insular ballet world — providing him an interdisciplinary attitude where his work at ABT is supplemented by a string of guest-artist roles, side projects and social engagements. “ABT gives me substance and a home base, but I was always interested in different fields. I went to regular school, my brain was always divided into different segments and I almost like to push myself in different directions,” he says.

Here, he talks about ballet’s adaptation to a digitalized world, and the stylistic differences between American and European dance mediums.

WWD: Tell us about how “Intensio” came to be?

Daniil Simkin: It started out just as a gala evening, it was a pastiche of already-created work…but this new iteration has all new [choreographic] creations with eight dancers including myself.

I grew up in Germany and I was engrained and part of the European dance scene. I’d watch all of these contemporary companies and developed a certain sensibility and taste. When I came to New York, I appreciated that I was exposed to another sensibility, but felt something was missing from my artistic satisfaction and wanted to explore something on the more European side of things.

WWD: How would you categorize the difference between the two regions’ taste in dance?

D.S.: It’s a little difficult to explain, but [European dance] has a different feeling to it — it’s less based on geometry and the simplicity of steps, and has more of an emotional feeling. It becomes a spectacle and an entertainment experience. I think it’s a step for the future in ballet in order to stay relevant — we have to stay entertaining because we now have to compete with some other [new] entertaining mediums.

WWD: How do you see “Intensio” developing in the future?

D.S.: We are already talking about future iterations of “Intensio,” I’m thinking about many possibilities, not only producing but also possibly a book in some way. I wouldn’t say though I could pinpoint [that a new “Intensio” would come every year] or a time line — it’s not an iPhone model where you get a new one every other year.

WWD: You mentioned that you have a strong interest in fashion. Where do you enjoy looking for clothes?

D.S.: I really love clothes, Ann Demeulemeester, Rick Owens, Comme des Garçons. I love Japan — the men’s shop at Isetan has the best men’s selection in the world. For clothes in general, Japan has so many great artisanal places to shop. I am also trying to shop on eBay as well, it’s so much cheaper — once you know your size you can find really great things.