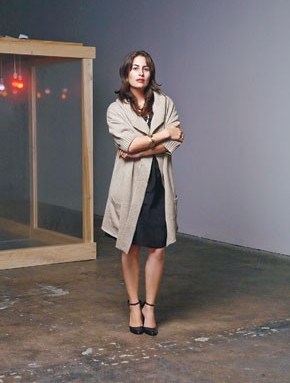 The City of Angels is becoming the city of artists. Rent is cheap, galleries are popping up in Chinatown and Culver City, and artists David Hockney, John Baldessari, Ed Ruscha and Rosson Crow are already ensconced. “L.A. is having its moment,” says gallerist Emi Fontana. Here, a look at some key players.

Curator Lauri Firstenberg knows that the most efficient means to introduce Los Angelenos to contemporary art is via their natural habitat: the mall and the road.

Under sponsorship by Firstenberg’s nonprofit exhibition space, LAXART, New Yorkers Wade Guyton and Kelley Walker made their Los Angeles debut by erecting a Pop Art billboard above La Cienega Boulevard. Later this year, shoppers at the Hollywood & Highland Center will find themselves in a light and sound installation by Walead Beshty, a London-born local.

“There are so many projects I do in L.A. that I can never do in New York,” said Firstenberg, 36, who previously was a curator at New York’s Artists Space and Los Angeles’ MAK Center for Art and Architecture. “We’re making new work and new art for a new audience.”

Firstenberg is also guest curator of the “California Biennial,” a five-month show kicking off in October with 55 artists’ works to be shown everywhere from Tijuana, Mexico, and the Orange County Museum of Art to Joshua Tree National Park and San Francisco.

“It’s a young city, and I think culture — particularly the art world — is expanding,” Firstenberg says of Los Angeles. “There is a new kind of energy.”

These days, it’s commonplace to find a boutique that accessorizes a frock with a painting. Though Ooga Booga owner Wendy Yao, who graduated from Stanford University, was one of the first to sell fashion and art when she opened her doors in 2004, it’s still a struggle to pay the rent. That’s why she traveled to art fairs to hawk a record-and-book set by Welsh-born Cerith Wyn Evans along with Assume Vivid Astro Focus’ dizzying print of a chicken glammed out à la Ziggy Stardust.

The concrete floors, plywood ceiling panels and fluorescent lighting in the tiny 325-square-foot shop are hardly flattering to $125 inky blue jeans from Opening Ceremony, $450 hooded capes by Bless and other merchandise in the store, whose name Yao co-opted from a friend’s band. “I’m sure fluorescent lighting is illegal in most galleries and clothing stores,” she jokes.

For 14 years, New Image Art Gallery has drawn art fans to a bustling corner of Santa Monica Boulevard and Fairfax Avenue, occupied by a Whole Foods, pawnshops and a handful of Russian eateries.

“It’s a community,” says owner Marsea Goldberg of her gallery.

Case in point: When New York artist Swoon broke Goldberg’s surfboard when they recently hit the waves together, Swoon whipped up images of mermaids for her piece, titled “Drown Your Boats.”

Goldberg studied painting and sculpture at the University of California at Santa Barbara before designing textiles for companies ranging from Kmart to Prada. When a space below her studio became vacant, she started organizing shows there for her friends, such as performance artist Karen Finley and skateboarder-turned-painter/photographer Ed Templeton. She has a knack for discovering new talent, including painter Cleon Peterson and a Mexican-American duo known as The Date Farmers. “I’m not a snob,” Goldberg says. “If it’s good, I’m going to show it.”

Weaned on Disney cartoons and trips to Mickey Mouse’s theme park near her childhood home in Huntington Beach, Calif., Camille Rose Garcia likes to paint the happiest place on earth — after it has been destroyed in an apocalypse.

Among the sympathetic characters she portrays with a Gothic perspective are crying polar bears, tear-drop-shaped sprites and humans roasting marshmallows while dressed as woodpeckers. In a new series, “The Grand Illusion,” Garcia addresses the demise of the Industrial Revolution with insanely colorful scenes of animals downing pills. Imagine if Bambi wandered to the Valley of the Dolls.

“Growing up in suburbia didn’t make a lot of sense to me,” says Garcia, 37. “We forgot we are part of nature.”

To become closer to Mother Earth, Garcia and her musician-husband, Jeremy Goff, moved into a cabin nestled in the middle of a national forest near the Oregon border. Despite living in the woods, she still considers herself a Los Angeles artist influenced by Mexican murals, Hollywood, skateboarders and comic books.

Her fantasy worlds resonate with the bankers, film executives and musicians who cram into her shows at Merry Karnowsky Gallery. Artist Mark Ryden calls Garcia his favorite painter, designer Tarina Tarantino decorates her office with Garcia’s visual fairy tales and Biba’s fall collection was Garcia-inspired. Her fan base has even stretched into the tattoo parlor. “They can’t buy the art, so they get it tattooed,” she says. “I think it’s great.”