The opera, with costumes sponsored by Mr Porter, is a partnership between the Metropolitan Opera in New York and the English National Opera. 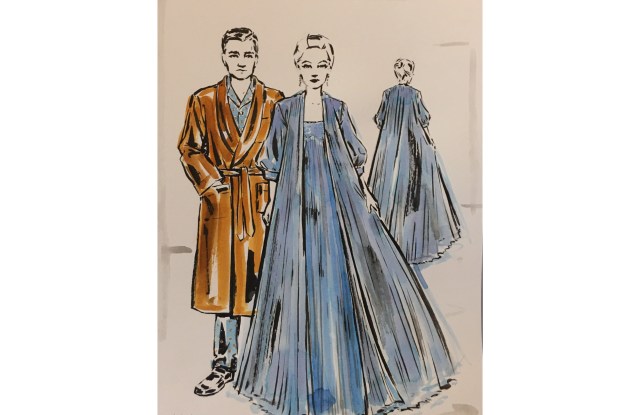 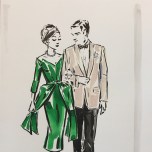 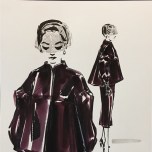 LONDON — A vintage-style Prada bag worn by the main character in the English National Opera’s production of “Marnie” plays a starring role, according to Arianne Phillips, who created the costumes. The opera is an adaptation of the 1961 thriller by Winston Graham that takes place in the Fifties and the cast includes Sasha Cooke, Daniel Okulitch and James Liang.

The story focuses on a troubled young woman named Marnie, who spends her life embezzling from her employers and assuming new identities. The opera company is certainly not the first to dramatize Marnie’s story. The Alfred Hitchcock film by the same name stars Tippi Hedren in the title role alongside Sean Connery.

The opera, with costumes sponsored by Mr Porter, is a partnership between the Metropolitan Opera in New York and the English National Opera. It opens this Saturday in London, and relaunches next October at the Met in New York.

WWD: What was the inspiration behind the costumes?

Arianne Phillips: First and foremost, the inspiration was the novel that was written by Winston Graham, the same novel that Alfred Hitchcock famously made into his version of the film. Between the novel and the film, there is plenty of inspiration. What I would say is that in terms of the design of the opera, we were inspired by midcentury design. We looked at a lot of color palettes from early Fifties jazz albums.

WWD: How did you dress Marnie’s character?

A.P.: Marnie’s character is duplicitous to say the least. She is a liar and a thief and she has many different personas. Basically, she uses the way that she looks. She infiltrated an upper-class world in England, so her look is very presentational, stylish and very posh. Her character is a real reflection of design at the time. We imagine that she’d have worn designer clothes and been quite fashionable, but the way that Marnie dressed was a veneer and a facade, so it was very important that her character looked completely pristine and put together.

WWD: Did you create any bespoke designs?

A.P.: Everything was designed by me. We made everything. I did have the incredible support of Mr Porter, who helped me realize my designs. I also did call upon some of my friends out there, when I put my styling hat on. I worked with Prada. The main prop that Marnie uses (because she embezzles from different jobs) is her handbag. So I asked Prada if they would collaborate with me on a Marnie handbag, and they did it beautifully. They made a beautiful Marnie handbag as well as shoes to match. The bag is based on a vintage look for the time. It’s kind of a hybrid — it’s embossed, leatherlike faux croc. It’s chocolate brown and her main accessory throughout the opera.

I also went to Turnbull & Asser as part of the Porter family. They’re famous for their men’s wear and shirting. They outfitted the principal men with wonderful shirts and ties. Everything else pretty much was bespoke. Turnbull & Asser actually made a really beautiful robe for Mark Rutland’s character, who is the male lead, Marnie’s husband. They made a beautiful saffron-colored dressing gown. I was inspired by Connery’s robe in the original film. So they made that for me and the shirts and ties. While the Hitchcock film was set in America, the opera takes place in England, so when I think of great English style, Turnbull & Asser is top of my list. I worked with them successfully on Kingsman. They’re kind of my go-to for men’s dressing, in terms of shirts and ties.

WWD: Was there a particular look or costume that stood out for you?

A.P.: Because it’s an opera and it’s live theater, I used color silhouettes. It’s a very different consideration from working on a film or photo shoot. With a film or photo shoot, you have the ability to highlight details and see nuances. The coliseum — which is one of London’s most grand and incredible theaters and is the home to the English National Opera — seats 2,000 people. As a designer, you have to be able to make sure that no matter where someone is sitting in the audience, they understand the characters and the impact of the design. I really focused a lot on silhouette and color. I looked at a lot of midcentury references from wonderful sculptural shapes, including Balenciaga. I was very inspired for the color palette — there’s a heightened quality of color in this piece and more inspired by looking at jazz album covers and art from the Fifties, Yves Klein, Mondrian and the great contemporary artists of the day, which were really inspiring for color and silhouette.

WWD: How do you compare working on this opera to other past projects?

A.P.: It’s a much longer, more protracted process. When I got the commission, I was invited to design the opera over a year and a half ago, so unlike a film or shoot, this really allowed me time to develop my mood boards and for the design process. I took time — like three or four months — to develop my mood boards. Then, I got to work on the design and sketches. I got the opportunity to live with the designs, make alterations and changes, which was a luxurious process. Usually, you just have to move really fast. When we get to the Met next year, we’ll have the opportunity to further hone and tweak. It is invigorating to work with such an amazing team and the composer Nico Muhly. It’s very uplifting to work with such orchestrated music and with a 75-piece orchestra. There’s nothing quite like it. It’s been a real humbling experience. Also it’s really great reuniting with the director, who I did “Hedwig and the Angry Inch” on Broadway with, and the same lighting designer and production designer. It’s been really fun. I’m incredibly grateful. I always look for new challenges and frontiers within costume so it’s been a thrill — a real gift.

WWD: Can you tell us about upcoming projects and plans — in particular the Madonna-directed film?

A.P.: I can’t share anything other than it’s a novel that Madonna has adapted. It’s called “The Impossible Lives of Greta Wells.” She’s written and crafted a beautiful script that takes place over multiple time periods in New York. It’s superexciting and we’re gearing up for it in 2018.