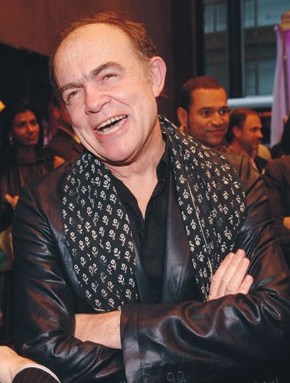 Apparently, it is never too late to celebrate a store’s opening — even if it occurred months ago. On Thursday night, a curious mix of models and French-speaking anonymes, some toting along their purse-size pooches, flocked to 57th Street, where Christian Lacroix was making his first New York appearance in four years at his namesake boutique.

Guests crammed into the steamy space that had even zero-body-fat models sweating it out. “It’s too hot in here. It feels like detox,” exclaimed catwalker Emina Cunmulaj as she beat a hasty retreat.

Lacroix gamely stuck it out. “I’m a New York lover,” he proclaimed. Then why the delay in ribbon-cutting? He blamed scheduling issues, but admitted he’s also loathe to fly. “I prefer trains,” he smiled. Certainly his absence from New York has left Lacroix less familiar with the ever-evolving sea of social faces. “You’ll have to introduce me to everyone,” he joked.

Among those he was eager to meet were Marjorie Gubelmann, Amanda Brooks, Debbie Bancroft and Alex Kramer at the private dinner that followed at the Gramercy Hotel Rooftop Garden. But luckily Lacroix had a few familiar faces in the crowd. “I’m so happy he’s here,” said longtime acquaintance Blaine Trump. Meanwhile, Sarah Jessica Parker said she came “as a friend, straight from work.” “I didn’t have time to put on Lacroix,” she explained.

One lady who did decided to forgo the elegant meal. “I’m going home to get a good night’s rest,” said Muffie Potter Aston, who was wearing her mother’s beaded Lacroix evening jacket. “My mother always said, ‘Know your Cinderella moment, leave them wanting more.'”

The night before, stars crossed the East River to see Paul Simon take the stage at the Brooklyn Academy of Music for the gala celebrating his monthlong residency there. The singer/songwriter, along with an eclectic group of South African and Brazilian musicians, rocked the Opera House with a two-hour set that got Parker Posey boogying in her front-row seat. “I am performing with so many old friends tonight, it’s quite emotional,” Simon said.

Concertgoer Mario Batali was fresh off a jaunt around Spain with Gwyneth Paltrow taping their upcoming food show. “She won’t eat anything with four legs — she gets grossed out by a cappuccino, she thinks it is cow mucus” said Batali of Paltrow’s famously particular eating habits. “I didn’t care, it meant more ham for me.”

At the dinner afterward, David Byrne (who brought down the house with his version of “You Can Call Me Al”) joined Susan Sarandon, Jennifer Stockman and Chuck Close to toast the singer.

Back in Manhattan, the American Academy in Rome honored Mercedes Bass at Cipriani 42nd Street. “It was a love affair from the beginning,” Bass said, referring to her 18-year association with the organization. Oscar and Annette de la Renta and Adele Chatfield Taylor organized the dinner that drew Jayne Wrightsman, Nancy and Henry Kissinger, Agnes Gund, Princess Firyal of Jordan and John Richardson — who was also honored.

On Tuesday, the art crowd flooded into the Theory store for artist David Ellis’ performance piece “Flyway.” The execution — a man wearing a giant owl costume made from drinking straws who lurched around the room — left the group entertained, if not a little frightened. “It’s coming right toward you,” said one guest to Adam Weinberg.

Beth Rudin de Woody got it, but she’s an Ellis fan. “I first learned about him at Frieze,” she said. “I’m buying one of his typewriters.”

In Los Angeles, W magazine and a handful of actresses including Leelee Sobieski and Kelly Preston helped designer Tia Cibani open her new Ports 1961 store on Melrose while in London, Agyness Deyn chowed down on fish and chips at East London’s Bistroteque during the dinner i-D magazine threw her, celebrating her sixth time as cover girl. Deyn welcomed guests including her best friend Henry Holland, Christopher Kane, Olympia Scarry and Kelly Osbourne. In true-Brit style, the evening culminated with a traditional pub quiz and darts.