Actress Kathryn Newton to Be Ambassador for Polo Golf

The "Big Little Lies" actress has been an avid golfer since she was a toddler.

Kathryn Newton in a promotional image for Polo Golf.

Kathryn Newton has two passions: acting and golf. Now the actress is indulging both as the new female ambassador of the Polo Golf and RLX brands.

Newton, best known for her role as Abigail Carlson, Reese Witherspoon’s daughter in “Big Little Lies,” has been hitting golf balls since she could walk. “I grew up on a golf course,” said the Coral Gables, Fla., native and lifelong Ralph Lauren fan.

There are even photos of her on the putting green wearing a Ralph Lauren polo when she was just a toddler. Since then, she’s attended fashion shows and events for the company, wearing the latest looks from the women’s collection.

“I am so excited to team up with Ralph Lauren,” she said. “Since I was a little girl, I have been wearing Ralph Lauren on and off the golf course. I am truly honored and proud to represent the brand and look forward to being a part of the RL family.”

Newton began playing in tournaments when she was eight — her dad was her caddy — and eventually attended Notre Dame High School in southern California where she was a key part of the school’s championship golf team. Newton even had her eye on the 2012 U.S. Women’s Open, but it was then that her life changed forever: she had to withdraw from the qualifiers when she landed the lead role in “Paranormal Activity 4.”

“I had dreams of attending USC and playing golf there,” she said. But the lure of acting was too tempting and she put those dreams on the back burner. Although she may have entertained thoughts of one day becoming a professional golfer, reaching that goal would have required a major commitment, she said, one that didn’t mesh with her acting ambitions.

So acting won out.

Since making her choice, the 23-year-old has appeared in “All My Children,” “Bad Teacher,” “Supernatural,” “Mad Men,” “Gary Unmarried” and a slew of other films and television shows. So despite playing to a two handicap and being deemed “the best golfer in Hollywood” by Golf Digest, Newton appears to have made the right choice.

But while her career goals may have shifted, Newton has never lost her love of the game. In fact, she always carries her clubs on set and still plays on the weekends when she can. She also participates in charity tournaments around the country and will continue to do so in her role as a Ralph Lauren ambassador. “It helps keep me grounded,” she said.

Starting later this month, Newton will be featured alongside Justin Thomas, the Ralph Lauren-sponsored PGA Tour golfer, in the brand’s spring ad campaign. She’ll also star in the fall campaign later this year.

“I am a huge fan of Justin’s — he’s so good,” she said, joking that she did her best to “be really cool on set” during the shoot in Florida. 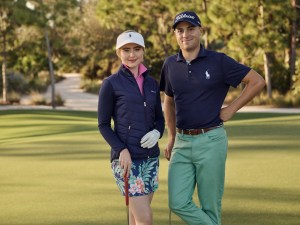 Although Newton is quarantined in her home in Los Angeles, she’s eager to soon get out on the links again since most golf courses around the country have reopened. “It’s an individual sport and there’s no physical contact,” she said, adding that it’ll also give her the opportunity to “wear my cute new outfits” from the Polo Golf and RLX collections. “You always play better when you dress well,” she said.

But until then, she’s making the best of her stay-at-home time. “It’s nice to be home,” she said, “making cookies and playing with my poodles.” Her three dogs — Jack King, Ladybird and Buddy — have all become Instagram stars so keeping their posts current is helping fill her time. “I got them red, white and blue Ralph Lauren sweaters for Christmas,” she said.

Newton is also eager to get back to work on season two of “The Society,” the Netflix series where she plays Allie Pressman, but when that’ll happen is still unknown because of the pandemic. Newton admits that she didn’t immediately realize how serious the health situation was because she had been “in a bubble” filming “The Map of Tiny Perfect Things,” a drama also starring Josh Hamilton, that was just completed.

She’s also starring in a yet-to-be-titled horror-comedy body-swapping thriller with Vince Vaughn where he plays a serial killer, and she recently completed production on “Pokemon Detective Pikachu.”

Like everyone else, Newton is eager for the quarantine to end so she can get back to her work and the projects she’s currently in the middle of filming.

“I’m so, so excited to be with my castmates again,” she said, adding that they’ve become her “closest friends.”

And when she does get back to the set, she’s going to do her best to draw them into her favorite hobby. “I’m trying to show my friends that golf is cool,” she said.