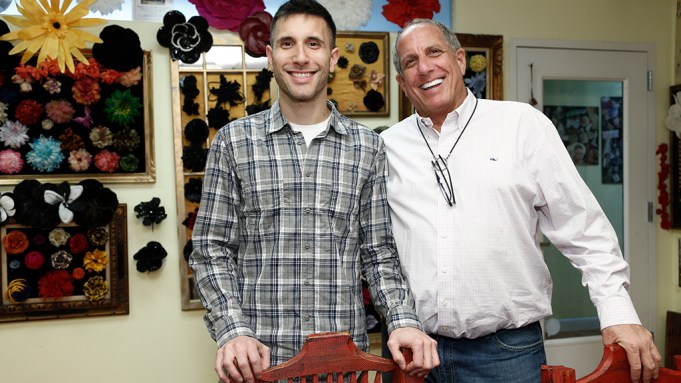 “That was a big product for us,” says Adam Brand, the heir apparent to M&S Schmalberg, a heritage, high-end artificial flower business in New York’s Garment District that is the largest manufacturer of custom silk flowers in the city. He was referring to the small boutonnieres the firm, owned by his father Warren and aunt Debra, which has been making and selling to men’s wear firms throughout New York and the rest of the country. They sell the items individually, in large groups or in boxes of four, in case a client wants a variety to wear with his suits. They have a loop that allows them to fasten on the button underneath the collar of a jacket. The petals of the flowers are sometimes colorful, or sometimes patterned in black-and-white men’s wear motifs such as checks or plaids.

The Brands sell them to big as well as small firms, but the latter is better for their company. For instance, small made-to-order bridal companies like their flowers because they can tell the difference in quality between their products and those created in China. They often get orders from other companies that have tried sourcing artificial flowers from that country, but don’t like the results. Some companies order 24, 36 or 50 pieces; Tiffany’s ordered 14,000 at a moment when that firm was using them to decorate displays. A good period for the Schmalberg company was the heyday of the TV series “Sex and the City,” which ran from 1998 to 2004, in which Sarah Jessica Parker as the central character Carrie Bradshaw often wore large brooches of artificial flowers, which created a big vogue for them. “You couldn’t go to a mall without seeing them,” Warren Brand says.

Warren began working with his father Harold as a teenager, but had to start working full-time after his father was attacked at the office. It was a very busy period in the early Eighties, Warren recalls, and “the background checks had been neglected.” Two of his employees got in a fight on the shop floor; Harold tried to intervene and one of them pulled a gun and shot him. He survived, but had to stop working.

Adam and Warren have a friendly, jocular relationship, which undoubtedly helps when they’re working so closely together.  Although they disagree about certain things, they are always able to come to terms. To see their atelier is to lose any preconceptions you might have had about artificial flowers. The workroom is a riot of vivid color, with boxes of flowers stored floor-to-ceiling on shelves, a sampling of the flowers in each box attached to the outside to show what’s inside. There is a great, imaginative variety of them. Many are roses, but there are also dahlias, daisies, hibiscus and all sorts of flowers that only exist in the imaginations of the owners and the in-house team, sometimes in outlandish combinations of shades. They come in silk, cotton, velvet, suede, leather, snake and alligator skins.

Fabrics are often stretched and dyed on a wooden apparatus that looks as if it could have been in use since the Middle Ages. There is also a stunning collection of special metal tools for stamping and cutting flowers, made out of iron and brass, which date back to the beginning of the 20th century. Many of them are still used. Theirs is a union shop, and they work with companies such as Ralph Lauren, Oscar de la Renta, Calvin Klein, Marc Jacobs, Bill Blass, Carolina Herrera, Vera Wang, Badgley Mischka, Anna Sui, Manolo Blahnik, Anthropologie, Nanette Lepore, Brooks Brothers, Priscilla of Boston, the Metropolitan Opera and Disney. Broadway costumers like to work with them. Besides Parker, Rihanna and Anne Hathaway have also worn their flowers. They also just added a new service, making custom covered buttons in-house.

The family is not certain exactly how old their company is. But they do know that it was founded early in the 20th century, probably in 1916. The current patriarch, Harold, who was born in Poland, contacted the relatives who owned it after he survived World War II and the concentration camps. An American soldier helped him to get in touch with them. He had lost all of his immediate family in the violence and upheaval of the war. As Warren puts it, “They didn’t even make it as far as the camps.” Harold was helped by his American relatives to get to the United States, came to New York and began working with the firm. He ended up running it. At that time there were many small businesses making high-quality artificial flowers; now they are the last.