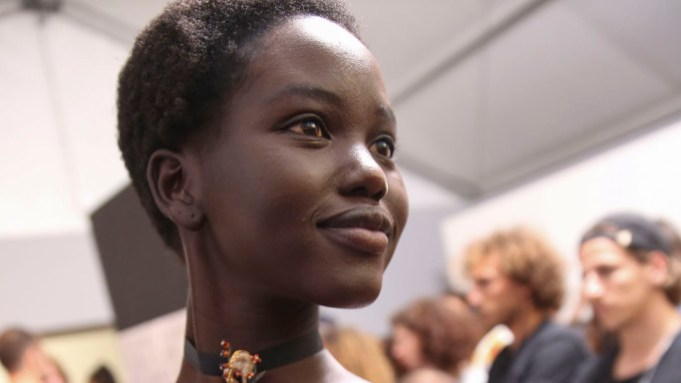 PARIS — Paris Couture Week was the season of Adut Akech.

The 18-year-old model walked for every major house, and closed both the Chanel and Valentino shows, becoming only the second black model in history to land the coveted bridal spot in a Chanel couture show — the first being fellow Sudanese model Alek Wek in 2004.

“I’m still head over heels on cloud nine about it. It still feels very unreal,” Akech, speaking by telephone a few days later, says of her banner season.

“I feel like it’s such a good way for me to represent not just Sudanese girls, or my people, but any model of color that looks up to me or that dreams of doing these things: anything is possible. I’m so, so proud to be able to represent them,” she adds.

Born in war-torn South Sudan on Christmas Day 1999, Akech spent the first four years of her life in the Kakuma refugee camp in northern Kenya. After two years of shuttling between Nairobi and Nakuru, she moved to Australia at age six with her siblings and her mother, settling in Adelaide.

She started modeling at 15, and got her big break in Europe in September 2016, when Yves Saint Laurent signed her exclusively to walk in Anthony Vaccarello’s debut show for the brand. Since then she has racked up catwalk appearances, walking in a staggering 33 shows for the fall 2018 season alone.

Valentino’s Pierpaolo Piccioli was another early champion, tapping Akech to feature in his last two campaigns, in addition to opening his ready-to-wear show in March. Akech joined Anne Hathaway, Frances McDormand and Troye Sivan as a guest of the designer at the Met Gala in New York in May.

“They perfectly represent what I think beauty is and represents today,” Piccioli says of his group of guests.

Akech’s appearance in a marigold-colored dress and crown of flowers at the Valentino show, which was met with a standing ovation, was one of the high points of couture week. “When I was doing my fitting, I was just crying the whole time,” she recalls. “He’s just such an amazing talented individual. I’m so grateful that he actually sees something in me.”

Piccioli says he strongly believes that Valentino should be represented worldwide by a model who reflects new beauty standards.

“Adut is a very special human being. She is more than beautiful: she has the ability to glow effortlessly of her own grace and every time she is around, you can ‘feel’ her. She is real, grateful for what she has achieved, and that in itself is just a rarity,” he says. “I wanted her because she embodies inclusiveness and contemporaneity.”

Akech has also forged a special bond with Karl Lagerfeld, who asked her to open Chanel’s cruise show in May, and to close the couture display in a mint green jacket and skirt inspired by the ceremonial outfit worn by members of the French Academy, the august institution that guards the French language.

“That was such an incredible moment for me,” Akech says. “It gives me the opportunity to let people know: never lose hope and never give up. Because it’s not that I never thought I could do Chanel, but you know, in what world did I think I would have the opportunity to do that? But I never gave up and I never lost hope. And I think that’s really what has got me this far.”

Lagerfeld, in turn, has welcomed Akech into the select club of girls he has nicknamed “choupettes” — which also happens to be the name of his cat — alongside the likes of Kristen Stewart, Cara Delevingne and Lily-Rose Depp. “She is delightful but, above all, endearing. A dream of a picture-perfect young girl. I adore her!” he enthuses.

Maria Grazia Chiuri, artistic director of women’s wear at Dior, has also fallen under her spell.

“Adut is more than just a model. Her radiance and positive energy is the reason why she stands out,” Chiuri says. “Wearing the rose haute couture dress from the latest autumn-winter collection, I could tell she felt feminine yet strong in the outfit.”

Indeed, Akech has channeled her tough beginnings into a powerful ambitious streak. The second eldest of six children raised by a single mother, she became interested in fashion at the age of 12, soaking up Victoria’s Secret shows on television.

“It’s very hard, coming from where I come from and my background: modeling is not taken seriously. So many people have crazy ideas and perceptions of what the industry is like,” she says. “There were some times when I just felt like giving up because it was just so much pressure. I’m so young and nobody believed in me.”

Nevertheless, she persisted — as the saying goes — and is now signed to The Society Management in New York; Elite in Paris, Milan, London, Barcelona and Copenhagen, and Chadwick Models in Sydney. Within two weeks of moving to New York last fall, she had shot the covers of the U.S., British, Italian and South Korean editions of Vogue.

“The thing about me is, once I set my mind to something, I will achieve it one way or the other,” Akech says matter-of-factly. “All I’ve ever wanted to do in my lifetime is make my mum proud. My mum has been my biggest supporter from Day One, even when she didn’t understand the industry.”

Having reached many of her goals in record time, Akech now plans to regroup before the spring shows this fall.

“I have accomplished everything that I ever wanted with my modeling career within two years, and now I feel I can retire. Obviously, that’s just a joke, but I feel very, very complete. I feel like at this point, anything else that happens is just, like, another blessing added on top of all the blessings I’ve had already,” she says.

Having wrapped the couture shows, she is in the midst of shooting seven editorials, in addition to her second i-D cover this year. After that, Akech plans to take a month off to spend time with family in Australia and return to Kenya for the first time since she left the country almost 13 years ago. On her itinerary is a visit to the Kakuma refugee camp.

“I just started working with the United Nations, and the camp that I’m supporting is the camp that I came from,” she says. “My mum is just the most incredible lady that I have ever met in my entire life. Her story is so inspiring, and I would love to share it with all the other single mothers there.”

Having earned her high school certificate, Akech is now studying for an entrepreneurship diploma online, with an eye to launching her own business someday.

“I bought my mum a car for her birthday and I’m trying to have a deposit for a new house for Christmas as her present,” Akech explains. “I want to get her dream house that’s going to complete her, and I will feel like I have somehow completed my mission.”

Something tells us she’s only just getting started.