The show was late and the Marc Jacobs' after party even later at the Lexington Armory ... Fashion goes to the animals ... What Tory wears daily. 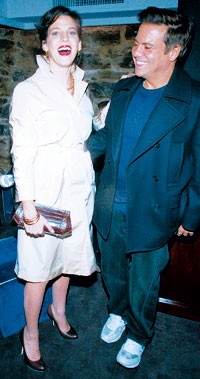 AFTER HOURS: Despite the late hour, a certain sect of hard-core revelers made their way to Marc Jacobs’ after party at 24 Fifth Avenue following his show at the Lexington Armory. Drew Barrymore, Anna Sui, Zoe Cassavetes, Patti Hansen and daughters Theodora and Alexandra milled around and posed for photographers while an absorbed Jacobs, flanked by a posse of models, stood watching a videotape of the show on repeat.

After the Narciso Rodriguez show Tuesday, editors, retailers and pals such as Jacqui Getty headed to 49 Grove for the designer’s après show fete. Jessica Seinfeld, cosseting her tiny bump in a light trench, chatted with the folk from Barneys New York. Rodriguez, relieved the show was over, planned to spend Wednesday recovering in bed with his dogs before leaving next week on a trip to Brazil.

ANIMAL PLANET: This season, the paparazzi aren’t the only animals in the tents. Paris Hilton carried her dog, Tinkerbell, to the Narciso Rodriguez show, sparking rumors the chihuahua is considering starting her own fashion line. At Heatherette, TV host Lauren Ezersky shared the spotlight with a jumbo stuffed Harmony Bear of the Care Bears, not to mention Miss Piggy and George Whipple. And Celerie Kemble brought her Jack Russell terrier, Anchovie, to support pal Lela Rose and Rose’s dog, Snitch, Wednesday morning.

“Anchovie sat out front like a proper lady,” says Kemble. “Her manners are often better than mine.” That is, until the show ended and Anchovie pooped on the carpet next to the runway. “That sure cleared the tent.”

READY-TO-WEAR: Tory Burch has had a busy week, between readying her Tory by TRB collection for today’s presentation and attending the requisite fashion shows. But the designer turned up at the tents and her showroom in chic ensembles that were a mix of her own line and other designer labels. “I try to wear at least one piece from the designer’s show I’m going to because I like their clothes, and I really respect what they’re doing.”