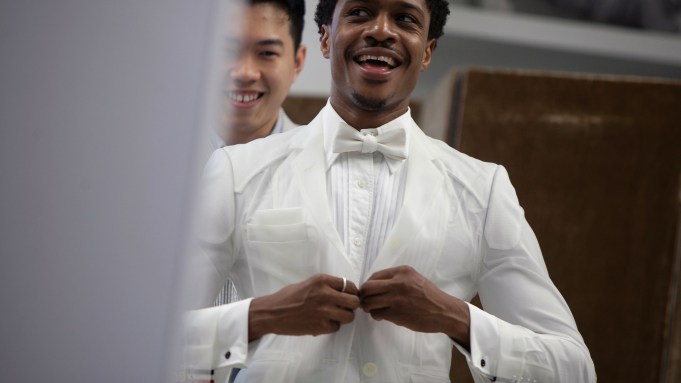 Ephraim Sykes has been busy. The actor had just finished a recording for the Tony Awards ceremony opening number on Friday morning, and was due back at Radio City Music Hall for a camera blocking rehearsal followed by the usual curtain call for the 8 p.m. performance of “Ain’t Too Proud — The Life and Times of The Temptations.” But with an hour to spare, the actor heads up to Thom Browne’s Garment District studio to try on outfits for Sunday.

Sykes is nominated for Best Performance by an Actor in a Featured Role in a Musical for his portrayal of the singer David Ruffin in the Broadway biomusical. The production picked up 12 Tony nominations in total, including for best musical, making it this year’s second-most nominated show.

“This whole entire week has been craziness, but in a good way,” says Sykes as he trades his street clothes — sweatpants, Air Jordans, and a baseball shirt announcing his team: “TEMPTATIONS” — for a white tulle pantsuit. The actor is a fan of the look; he recently wore the black version to a pre-Tonys celebratory dinner, and Thom Browne dressed the entire “Ain’t Too Proud” main cast for the Met Gala last month.

“It’s such an amazing play on — and I’m no fashion expert, by far — but it just seems like such classic themes,” says Sykes of the Thom Browne aesthetic. “I love being able to play with ideals of masculinity and femininity — it’s always fluid, and its always playing in that realm.”

At the moment, he’s considering a few variations of a look with a long black skirt. He seems to love each look more than the last. Sykes, an Alvin Ailey-trained dancer, makes sure to inspect the movability of each look.

“My mom’s going to be like ‘WHAT? Ephraim, I never thought you could pull that off but you did it somehow. I never thought I’d see you in a skirt, but I mean, you look good,'” he says. His family — parents, sister, brother, cousin — were flying up later that day from his hometown in Florida. “They’re really stupidly excited,” Sykes adds because, well, of course they are.

“My dad’s like, ‘What kind of suit do I need?’ My dad’s a pastor, so he has a bunch of different suits. So I’m just like, just wear something cool,” he adds.

It’s been a family affair through and through. Sykes was lying in bed the morning of April 30 when his nomination was announced; his castmate Jeremy Pope is nominated in the same category, and castmate Derrick Baskin is nominated for best leading actor in a musical.

“It was 8:30 in the morning, so I had kind of one eye open,” he says. “I just remember a shock going through my body. And then a phone call with my friend Derrick, who’s the lead in our show, and then just tears and things like that.”

Later that night after the show — Glenn Close and Tom Ford had been in the crowd — the entire team huddled onstage to toast the show’s journey, as well as orchestrator Harold Wheeler’s lifetime achievement award.

“This is finally everything coming to fruition,” says Sykes. “That success was already there before the nominations came out; the nominations are not even the icing on the cake,” he adds. “Audiences have really gravitated toward this piece. So that was already the win, that’s what we’re doing the show night by night for. So then [being nominated] was like OK, cool. Now we’re being recognized by the theater community at a high level.”

Of course, Broadway is not laissez-faire; it’s show business. The show opened on March 21 to great reviews, and there continues to be pressure to exceed audience expectations.

“The nominations matter to the show’s success because a lot of people that come from out of town are like, ‘Oh, I hear it’s got these nominations, maybe I should go see it because it must be good,'” he continues. “I try not to think about it like that, because I truly believe what we do in theater, especially this show, is so much for a higher purpose and calling. It’s so therapeutic and so healing, and what people are getting from the show matters much more than the awards and nominations that we get.”

Next up, Sykes slips on an embroidered suit jacket with a seahorse on the back, which he quickly relates to his Broadway debut, “The Little Mermaid.” The actor, who was also in the original cast of “Hamilton,” recognizes that “Ain’t Too Proud” is a special moment, and not only because of all the accolades. Reflecting on why the show has resonated so deeply with audiences, Sykes points to The Temptations’ ability to bring people together during a period of civil unrest; he notes how the show illustrates the individual struggles of its members. Perhaps most of all, people just really like the music.

Sykes has almost narrowed down his outfit options to three looks — for the carpet, ceremony, and after parties — but he’s still undecided, and it’s time to head back up to Radio City. It’ll be a sprint until he’s able to relax at the cast’s official after party Sunday night: two more shows on Saturday, a 6:30 a.m call time on Sunday for more Tonys prep, the usual Sunday matinee, and then back to Radio City for the red carpet and ceremony. “So it’s nonstop from here on out,” he says. “I’m actually not nervous — as of yet, at least.”

For now, he’s taking things one breath, one step at a time.

“That way, I can enjoy every moment of this time right now,” he adds, changing back into his own clothes. “I can be a workhorse and I can always be thinking ahead trying to get to what’s next and want to be my best and all this stuff, and miss out on actually enjoying what’s happening.”