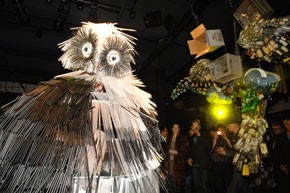 Sometimes art can be pretty high-concept, so much so that it’s even over the heads of those who are in the know. But no one wants to admit that. So when David Ellis put on his “Flyway” performance piece at the Theory store Tuesday evening, and a man wearing a giant owl costume made from drinking straws began lurching around the room, onlookers appeared entertained-even if they were a little frightened. “It’s coming right toward you,” said a guest to Adam Weinberg.

The owl then began flapping its wings to a strong percussion beat, opposite a larger sculpture of an owl made from recycled beer, water and liquor bottles. “I’m confused,” said Waris Alhuwalia to girlfriend Chiara Clemente.

Fortunately, Ellis’ other work, a painting titled “Baker’s,” was easier for the crowd of young downtowners to grasp, as they munched s’mores flavored popcorn and chocolate chip cookies.