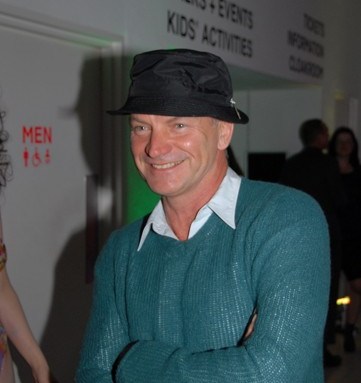 Fans and friends of the illustrator Alan Aldridge, who’s best known for the psychedelic artwork he created for The Beatles in the Sixties, flocked to to the opening of an exhibition of his work at South London’s Design Museum Monday night, which was sponsored by H. Stern. “I felt like it was time for my father to be resurrected, for him to get the honor he deserves,” said Aldridge’s daughter, Saffron Aldridge, who hosted the event. “It’s a real feast for the eyes,” she added.

Guests including Princess Marie Chantal of Greece, Pia Getty, Jasmine Guinness, Jade Parfitt, the artist’s daughter Lily Aldridge and Sting – who was greeted at the door by a model wearing nothing but body paint depicting one of Aldridge’s colorful designs – all turned up to sip Champagne and check out the show, called “The Man with Kaleidoscope Eyes.” Model Kristen McMenamy, married to Aldridge’s son Miles, said she was so taken with the pieces on display that she fancied some of the out-there illustrations for her own home. “I’d love to have a room like this, maybe one of my kids’ rooms,” mused McMenamy, who’s now based in London, marveling at the walls plastered with Aldridge’s images. “And hey – he’s my father in law, maybe he could do it for free,” she said with a laugh.