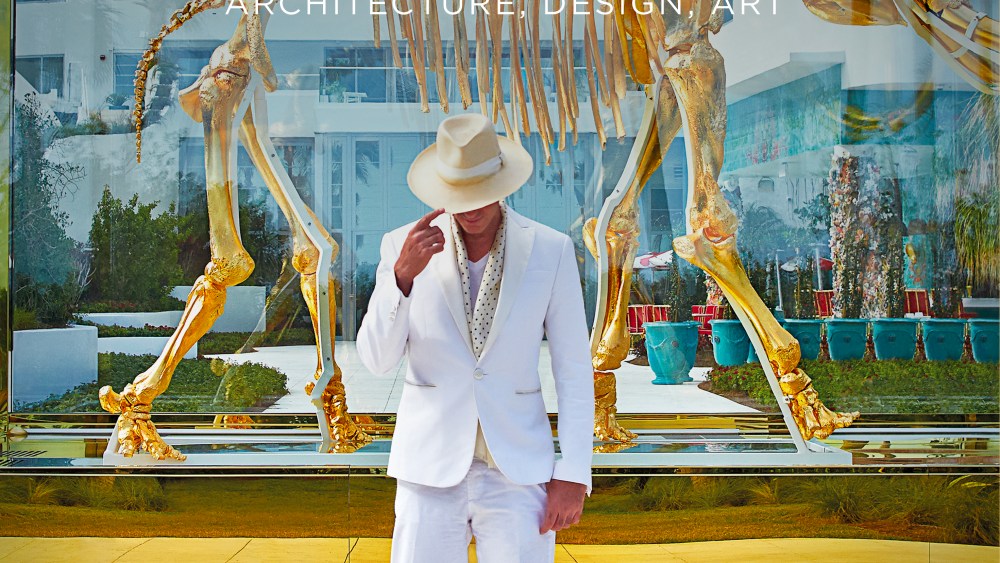 The way he tells it, Alan Faena is the poster child for the power of positive thinking. The right people and opportunities have just seemed to materialize at the right moment, thanks in part to an enduring optimism. Such was the path for “Alchemy and Creative Collaboration: Architecture, Design, Art,” the coffee table-sized memoir he’s releasing with Rizzoli on April 25. The book publisher approached him with the project, and the moment felt right.

“They told me, ‘Alan, it’s so much bigger, what you have created,'” Faena recalls on the phone from Buenos Aires. The book chronologically tracks Faena’s life, accompanied by a slew of archival photos. Documented in the press from an early age due to his modeling beginnings, he had plenty of photographs to choose from; the challenge was sifting through and selecting the most resonant ones.

“The book was a big exercise for me,” Faena adds. “I think that what you can take from the book about all of those images is a mind that goes in a direct line like an arrow, following his dreams.”

Indeed, Faena’s story is one of transformation sparked by personal and societal change — from a young boy growing up during the Argentine Revolution to his days as a model and an “It” boy, building a successful fashion company during Argentina’s national move toward democracy; turning personal heartbreak into becoming a large-scale gardener in Uruguay, followed by developing a hotel and creative incubator in Buenos Aires during his native country’s economic decline.

“I believe that one of the most difficult things to do when you are a creator is to change industries,” Faena says of his hard-to-pin professional journey. “To jump, as a creator, from one industry to another one but keeping at the end of the day the same vision is what for me is more valuable. It doesn’t matter if you make a T-shirt or if you make a building; the question is how you want it to really push the limits and the boundaries. It doesn’t matter if it’s a fashion show or if it’s a district or an art center — the idea is always to try to bring to the community, to elevate the city the community and what you can offer to the people in general.”

Similar to his own transformation as a creator, Faena has also been integral to the rejuvenation of several urban districts, specifically Buenos Aires’ Puerto Madero and Miami’s Mid-Beach.

After giving up his ownership in the Argentine fashion company he had helped build, Via Vai, to his ex-girlfriend, Faena moved to Uruguay’s remote coast to build a garden and spiritually reconnect, when the idea of building a hotel and cultural center in a “forgotten” area of Argentina trickled in. Specifically, he set his sights on an old grain-storage facility in the abandoned coastal area of Puerto Madero, imagining himself bringing life back to the building and area, in the middle of Argentina’s economic downturn.

He convinced the owner to sell, and Philippe Starck to help him design his vision (who he was able to connect with through Claude Challe, who happened to stop by his house in Uruguay). Faena also convinced Chris Burch and Len Blavatnik to help him in development. Also the owner of a decrepit Art Deco building in Miami, it was Blavatnik — whom Faena describes in the book as a “true brother in life” — who later approached Faena about bringing and building the brand in Miami. The Faena Miami Beach district began with the opening of the Faena hotel in 2015 followed by Faena Forum, Faena Park and Faena Bazaar, which opened late last year.

“A lot of people cannot see more than a white canvas and then you see an amazing painting — or you can see a block of marble and then see an amazing statue,” Faena says of his track record of building beauty under adverse conditions. “I think that’s the mission of the artist, and that’s why we get impressed with all of these people that create things and change the form of things.”

Despite all of his business success, Faena maintains that throughout his many ventures, the constant has been his vision.

“You have to deal with the uncertainty of not knowing that this would work or not. But the most important thing at the end of the day is to have a strong vision, a strong point of view that is real that is not marketing, and talking from your heart and believing that what you are doing from your heart is the best thing that you could do,” Faena says. “And when you give the best of yourself in every step, it is real.”

Does Faena have another transformation in his future?

Three Owls Market: One Part Bodega, One Part Restaurant, All for the Neighborhood

A Lot of White, A Bit of Weird: Fashion Designers’ Floral Choices Revealed