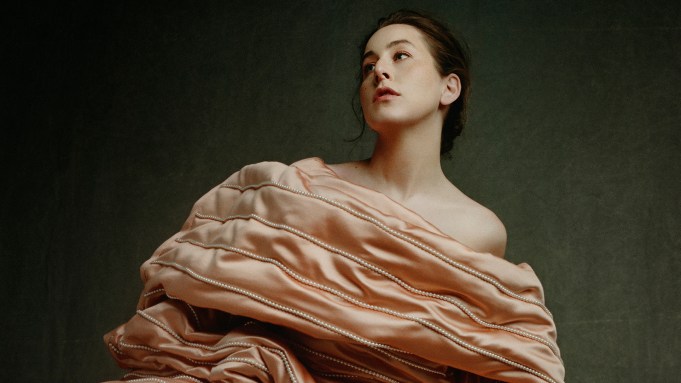 Though Alana Haim knew her way around a music video set — particularly one directed by Paul Thomas Anderson — she felt the first-day jitters in a big way on day one of shooting “Licorice Pizza,” her first acting job. Her scene partner, Cooper Hoffman, had also never acted before, and to make matters even more heightened, the pair’s first scene would be with none other than Bradley Cooper.

Haim, the 30-year-old youngest member of Grammy-nominated sister group Haim, and Hoffman, the 18-year-old son of late actor and one of Anderson’s frequent collaborators Philip Seymour Hoffman, had done a few screen tests together, where they ran around Los Angeles with Anderson going through the dialogue — and were then told that Day One, they’d start with the Cooper scene.

“We had heard that he was around, but we hadn’t seen him yet. We hadn’t talked to him,” Haim recalls. “There was no, ‘Oh, hi Bradley. And now you’re Jon Peters.’ He was completely separate from us, was kept on a whole other side of the house, intentionally.”

Haim and Hoffman and the three other teenage boys in the scene stood around waiting for some instruction, with the boys turning to her for wisdom.

“We were all just in this huddle and they were asking me, ‘What do we do?’ I was, like, ‘I don’t know. I guess I’m the oldest one here.’ I was, like, ‘Just wait,’” Haim says. “And then all of a sudden, out of nowhere we heard ‘action,’ and Bradley Cooper walked out as Jon Peters. And we were fully in the movie. It was, like, ‘Oh my God, we’re starting.’ There was no start time. It was just, ‘action,’ and then you’re in.”

“Licorice Pizza” has been an incredible breakout for Haim, who has found major success as a third of the band Haim (their latest album is up for Album of the Year at the Grammys come March) but who never, ever dreamed of becoming an actress. Yet when Anderson sends you a script for his latest movie with the lead character named after you, and asks whether you would be interested in playing the part, it’s hard to say no. Thankfully for those who have seen Haim’s performance, she said yes.

“It’s just a completely different thing,” she says of her newfound role of “actress.” “I’m still trying to figure it out myself. I still feel like a musician. I’ve always been a musician and I’m so grateful that anyone even considers me as maybe an actress. I’m just so happy that I even got the opportunity to try something so incredibly new.”

Haim is in the midst of the ongoing press tour for “Licorice Pizza,” which opened selectively in late fall before going wide Feb. 11, and now continues on with an awards campaign. (The film is nominated for Best Picture at the Oscars.) Coupled with that, she and her sisters will finally be touring their third album, “Women in Music Pt. III,” starting in April, after the pandemic had forced them to sit tight instead of taking the 2020 album on the road.

But Haim is in her sweet spot. “I’ve always loved to work, so the fact that I have work every day and I get to do something creative every day is the most amazing thing to me,” she says. “I just love being creative and love putting my head down and grinding things out and solving problems and gearing up for new adventures. So I’m having the time of my life.”

The Haim sisters’ relationship with Anderson was rather destined. Their mother taught Anderson art in elementary school, and growing up, Haim remembers her mom pointing to his movie posters and telling them, “You know, I taught him.”

But Anderson would reconnect with his long-lost second grade teacher Ms. Rose via her daughters, whose music he’d become a fan of without knowing the connection.

“He had heard [our single] ‘Forever’ on the radio, then bought our album on vinyl, and saw in the liner notes that we had thanked my friend Asa,” who was also a friend of his, Haim says. “Weirdly, I feel like my siblings and I and Paul were orbiting around each other in this weird way, where I knew that Paul loved the [San Fernando] Valley as much as we did. And I always thought, ‘If we ever meet, I really do think that we could have the most amazing conversation about music in the valley.’”

Their mutual friend put them in touch, and a few days later they met up — and the sisters agreed beforehand not to bring up the connection with their mom.

“Who knows? Maybe he hated my mom. I don’t know. Maybe my mom is the reason why the frogs fell down during ‘Magnolia.’ Maybe she was just the worst person to him,” Haim says.

A few hours in, though, after arriving at his house, her oldest sister Este couldn’t help but blurt out that their mom had been his teacher. The memory, it turns out, was thankfully a positive one: He had in fact kept a painting he had done with their mom all these years.

“Licorice Pizza,” a feel-good nostalgia spin through the valley in the ’70s, is centered around two characters: Gary Valentine, played by Hoffman and based on real-life Hollywood producer and actor Gary Goetzman (currently Tom Hanks’ producing partner); and Alana Kane, a twentysomething Jewish girl who bops from one job to the next, trying to find her place. The film is a coming-of-age story, certainly, one that shows a woman in her mid-20s in many ways sure of who she is but in others utterly adrift. Haim says she can relate.

“I feel like everyone goes through what Alana went through,” Haim says of Alana’s journey. “Where you’re out of high school, you’re living with your parents. That’s what I did. I didn’t get into college. I applied, did not get accepted, because I was just terrible at school. Now looking back on it, I wish I had paid more attention in school, but I didn’t and I was a terrible student and I didn’t get into college. My parents sat me down one day and asked what every parent does: ‘What are you doing with your life? What are you doing?’”

By then, her sister Danielle was touring with a few bands and Este was at UCLA. And then there was Alana, out of high school, not in college but nevertheless confident of what she’d do.

Hearing that, she enrolled in community college at Valley College for a year, working as a nanny and at Crossroads Trading Co., in that liminal phase her character Alana knows all too well.

“During that time, you’re in this weird in-between where you’re considered an adult, but you still feel like a kid still. You feel like you’re 13, but you’re actually 18 and you have to take on responsibility,” Haim says. “I feel like everyone goes through that transition. I didn’t know anybody that knew exactly what they wanted to do at a young age. We were all throwing spaghetti at the wall and hoping that something stuck, and we would follow it blindly and hopefully would love what we were doing. But 90 percent of the time it was, like, ‘No, we just have to pay our bills and buy a car.’”

While her breakout acting role might have come as somewhat of a surprise, working with Anderson wasn’t. Over their career, Anderson has directed nine music videos for Haim, and always told Alana that someday he was going to put her in a movie, a comment she never took too seriously. Yet one day she was in London and the script for ‘Licorice Pizza’ hit her inbox, with a lead character named Alana.

“I remember it was like four or five in the morning in London and [I called Paul] and I think he was just, like, ‘I thought that you would read this in the morning.’ I was, like, ‘No, absolutely not. You sent me the script and I’m obsessed,’” Haim says. They discussed her favorite parts of the script and finally Anderson asked her if she would want to play Alana.

“And I immediately said ‘yes’ and I was so excited,” Haim says, “and then I hung up the phone and I went to sleep and then I think I closed my eyes for five minutes and then I opened my eyes and was, like, ‘Oh my God, what did I just get myself into?’”

The trust she has in Anderson made her confident with her choice again and again. When making music, the Haim sisters never allow anyone into the studio, ever — it’s too vulnerable an experience, she says. Anderson is the exception.

“I think the thing that I loved about Paul is that…when we met him, we were in this crazy in between where we had just finished our first album cycle and we were making our second album and we were so in our heads, and we couldn’t get out. And when we met Paul, he came in and reenergized this playful creativity, where it was, like, ‘Oh, no. We’re making this because we love making music and we love making art. You’ve got to get out of your head. You got to just do what makes you happy,’” Haim says. “And having someone like that, who’s so incredibly supported and so excited to make new things, is just so important in the creative process. He was that for us.”

And not only has she had the time of her life on her latest Anderson collaboration, she’s sold on acting as a whole now.

“I love it so much. I had an amazing time making ‘Licorice Pizza,’” she says. “I would hope that I could do it again, but I’m switching my brain into touring. We’re finally touring our third album, which is outrageous to me. We put out our album in 2020. So now, right after this is all done, I go right back on the road, right back to my first love. I’m going back to my first boyfriend: music. We broke up for a second. We broke up, it wasn’t a bad breakup. It was just, we needed some space. I had like a little boyfriend on the side, that was acting, and now I realize I got to go back and go down the rabbit hole one more time. See if it works, see if we can get over what we thought we needed to get over. I think it’s going to be great.”