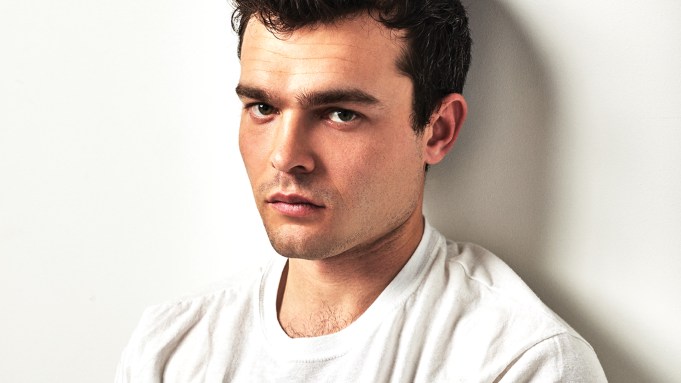 It was two summers ago and the actor was on the edge of king-sized bed in a quiet bedroom at a family party, a litter of loud nieces and nephews outside. The 26-year-old was anticipating a call from someone else entirely – from Ellen Chenoweth, the casting director of “Hail, Caesar!” — who he thought would tell him they decided to go in another direction in casting one of the film’s central characters, Hobie Doyle.

“I thought, ‘Ellen’s going to call and personally tell me that I didn’t get the part. That’s really considerate of them,” he says. “Then I hear Joel be like, ‘Did you not talk to your agent?’ and I paused, and he’s like, ‘You don’t even know yet, do you?’”

The latest from four-time Oscar-winning duo Joel and Ethan Coen, “Hail, Caesar!” is a comedy set in early Fifties Tinseltown and is imbued with the Coen brand of highly entertaining devolvement, in which ordinary, usually dim-witted, characters get unknowingly embroiled in some form of criminal high jinks. In “Caesar,” we follow Brolin, who plays a studio fixer enlisted by the fictional Capital Studios when the studio’s mega-movie star (George Clooney) goes missing.

Alden plays Hobie, a B-cowboy star modeled after a Gene Autry or a Roy Rogers. “These guys would be doing like three movies a week — they were constantly pumping out these B-Westerns, which were really popular. So Hobie’s a big movie star and what happens is they loose an actor from a drawing-room film, this sort of upscale, very sophisticated film called ‘Merrily We Dance’ and they need a star to slot in so the studio puts Hobie in the film.”

The slotting in is far from seamless. Hobie, accustomed to brazenly formulaic Westerns where there’s some gun-slinging, some lassoing and the guy saves the girl, has difficulty navigating the complexity of the drawing-room film. In a teaser for “Hail, Caesar!”, Ralph Fiennes, who plays the effete director of the drawing-room picture, grows increasingly frustrated when Hobie fails to deliver the line “Would that it ’twere so simple” without his clunky cowboy twang getting in the way. “It was written into the dialogue,” Alden says of Hobie’s accent, a hybrid of an old-timey, clipped cadence and a slow drawl. “Meaning Joel and Ethan deliberately misspelled words in the script to reflect his sort of lumbering way of speaking.”

The film has a meta aspect to it, in that it’s a film within a film. “That scene in particular with Ralph was pretty bizarre. A clapper would come out and say, ‘Hail, Caesar; Take 1; Scene 5’ and clap. Then Joel would say, ‘Action,’ and then the actor who played the clapper boy in my scene would say, ‘Merrily We Dance, Scene 1, Take 1,’ then clap and then Ralph Fiennes would say, ‘Action’. And I start that scene behind a door so I’m hearing two different claps and two different ‘Actions’. It was a little trippy, and the other thing is I’m playing Hobie playing someone else. So as an actor you’re trying to figure out doing the scene as the actor, as Hobie, would do the scene. It’s all very trippy.”

The company kept on set was also a bit of a trip for Ehrenreich. The kidnapped actor is played by George Clooney; Channing Tatum plays a tap-dancing Gene Kelly-type; Scarlett Johansson is an Esther Williams-esqe aqua musical player. “It’s almost like the fog has to burn off when you’re around someone as  famous as George Clooney. It takes a little while for you to stop thinking of them as their name if that makes sense. But once you’re in the scene and doing the work, you’re kind of all in the same boat. We’re all in front of the same firing squad.”