A new book spotlights the designer's mastery through extraordinary photographs of 30 of his 36 collections. 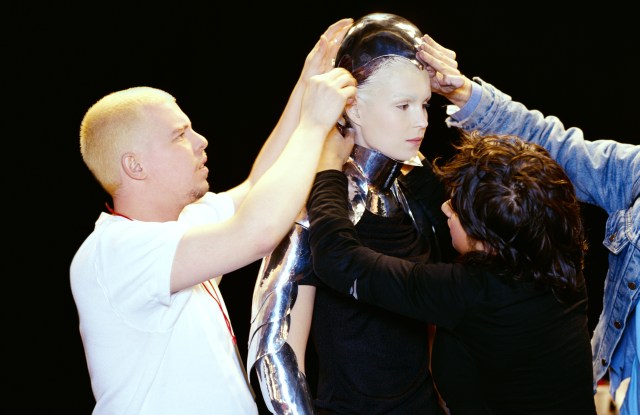 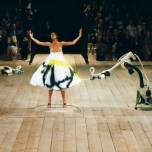 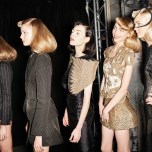 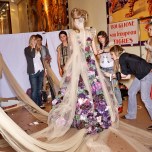 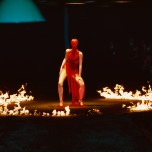 Robert Fairer first caught an Alexander McQueen fashion show at the Bluebird Garage in fall 1993, and within a few seasons the photographer was shooting the runway and backstage — as best he could.

More than six years after his death, Yale Press has published Fairer’s “Alexander McQueen: Unseen,” an encyclopedic behind-the-scenes look at 30 of the designer’s 36 collections. From Shalom Harlow rotating and being sprayed with car paint by robots in the No. 13 show in 1998 to McQueen helping to carry off the stage a model acting like an exhausted endurance dancer in the “Deliverance” show, Fairer captured it all. (Before the lights went down at a show, a seven-person team could often be found working silently on a dress’ last minute tweaks.) By his own estimates, Fairer, who worked as Vogue’s backstage photographer for more than 10 years, has a McQueen collection in the 30,000 range.

After “Alexander McQueen: Savage Beauty” was staged at the V&A in London and Fairer and his wife met with the museum’s team, they decided a book was in order. The V&A’s Claire Wilcox wrote the introduction and detailed collection references and Sally Singer penned the forward. In the midst of a shoot in his London studio, Fairer fielded a few questions via e-mail.

WWD: What is the first thing that comes to mind when you think of that time?

Robert Fairer: The early days of my career, fresh out of London College of Printing, were just about survival. McQueen and all my friends were young and experimenting with every medium: film, music, art and there was the usual desire to be really famous — so you are driven. Seeing what fame is today and what it can do to you, I am really glad I never actually made it and have kept my head down and just got on with the job quietly.

WWD: How did your time in Africa [photographing wild game, safari lodges and landscapes] prepare you for shooting backstage?

R.F.: Africa is a wild continent, so you have to be ready to expect any situation. If you are in the bush — you could be charged by rhino or step on a snake, and there is a challenging climate. With that in mind, you photograph everything you can — when you can, because the leopard has soon gone. Instead of a giraffe or lions, backstage you have beautiful girls, tall and fabulous, dressed in the most striking clothing that need to be photographed before the moment passes. I am always very calm — so I never get stressed as long as I am getting the best images for my editor and capturing the essence of the collection and the key pieces. That’s what it’s about for me, the fashion and the beauty.

WWD: Did you really have trouble selling your early fashion photos?

R.F.: Vanessa [his wife] was on buying trips to Paris with her mother who had dress shops in England. I was good at taking my imagery to magazines and Vanessa was great on the phone at the office, so we pushed our way in, truthfully. The McQueen hair and beauty was so far-out and if taken too literally, not very easy to present, so yes, it was only the coolest British magazines or offbeat titles that would publish early McQueen.

WWD: What strikes you about the collections when you look at them today? Where do you see his impact today?

R.F.: Alexander’s influence on clothing and his contribution is incalculable. The new frock coat shoulders, bumster lines, romantic dresses and military influences…with meaningful underlying narratives in almost every collection, where do you start? You will never stop. His input of energy is unprecedented. The spring 2010 Plato’s Atlantis collection is still out-of-this-world. No one since has attempted to implement where those new silhouettes could go, but much of the easier digital printing techniques have been copied relentlessly since it showed.

His last 16 unfinished pieces were miraculously completed in time by Sarah Burton and presented to a small group of selected fashion editors in Paris, March 2010 soon after his death. Many say this was his intended farewell couture collection to the fashion business. He was looking for a new form of self-expression. It is a tragedy that Alexander did not escape the pressure that has since undermined so many others in the industry. His genius would have become recognized in other forms of art, film and visual direction, operas…anything. From 24 to 40 years of age, he was creating fashion show performances with the assistance of his collaborators that will stay with anyone that saw them until the day they die.

WWD: Is there something about him that you think is little-known or that would be enlightening to those who never knew him?

R.F.: I did not know Alexander personally. I hope future generations understand that although his vision was singular, he didn’t do it all alone. His success was something he created and shared with his teams, which was unusual at the time. He gave them a word or an idea and trusted them to turn up on the night with the goods, keying into their own brilliance and interpretations. This took immense self-belief and courage. Alexander only did what he felt was right at the time, because he was incapable of doing anything else. Everyone really misses him and wants him to be remembered firstly for his artistry and many other contributions. That is how it should be. Other than that, he was adored and made the sun shine in the dark.