The documentary filmmaker's latest film, "American Selfie: One Nation Shoots Itself," takes viewers around the country to confront different perspectives on society.

A still from "American Selfie: One Nation Shoots Itself" directed by Alexandra Pelosi.

Like many Americans at this point in 2020, Alexandra Pelosi’s neighbors have a theory. Recently, they warned her about the pack of paparazzi waiting outside her apartment.

“Everybody is becoming sort of a conspiracy theorist,” says Pelosi. “My neighbors were like, ‘be careful when you go outside, because the paparazzi are there to take a picture of you without your mask.’”

Although much more believable than, say, the late JFK Jr. reappearing as the vice presidential nominee, it turned out that the pap-pack was after an even juicier photo op than the Speaker of the House’s documentary filmmaker daughter: They wanted a photo of Alec Baldwin’s newborn baby.

Blame the isolation of the pandemic, blame social media; blame the news feeds and cable news networks siloing viewers by promoting homogeneous viewpoints. “They’re not giving people an honest picture of what the world really looks like right now. They’re just feeding liberals liberal, and conservatives conservative,” says Pelosi. “And that’s why my neighbors all think that there’s a pack of paparazzi outside waiting to take a picture of me without my mask on, because they are liberals that live in Manhattan. And so they get a feed that says, Pelosi, Pelosi, Pelosi,” she adds of her mother, Nancy. “Their feed is only feeding them ‘Pelosi fighting with Trump,’ and they think, ‘Oh, my God, he’s out to get you.'”

Pelosi wants to talk to everyone — the liberal and the conservative, the young and old and disenfranchised. She spent the past year traveling around America doing just that for her 13th film, “American Selfie: One Nation Shoots Itself.” (Many of her films have been produced by doc doyenne Sheila Nevins, who Pelosi also jokingly describes as “mom.”) And despite her famous last name, she’s not an on-camera personality — when she was out in the field, she was just Alexandra from Showtime, and people of all views were willing to share their perspectives. “The whole idea of calling it ‘American Selfie’ was saying, we’re going to take a picture of how America looks right now and — spoiler alert — not so good,” she says. 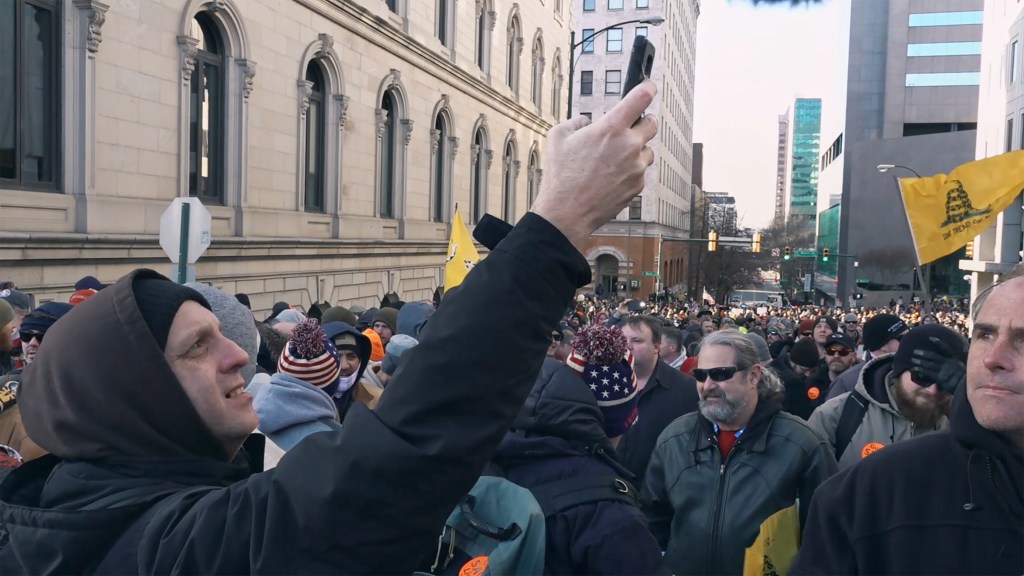 Pelosi approached the film — and life in general — by questioning her own beliefs. “I always seek out people who I don’t agree with first,” she says. “I was born in San Francisco. I live in Manhattan. I’m a liberal bubble dweller, and proud of my liberal values. I’m interested in people who don’t agree with me, because that’s much more interesting.”

The film starts with groups of selfie takers at Chicago tourist destination The Bean, before heading to the line outside the Apple flagship in New York on the day of the new iPhone release — coincidentally, the same day as the Climate March. But while the film starts out with a pessimistic view of the ubiquitous role of phones in society, it quickly pivots to share the upsides. White teenagers have pivoted en masse from posting only filter-perfect selfies to photos of themselves at protests and supporting racial justice issues. And of all the year’s defining moments, Pelosi credits footage shot by Darnella Frazier — using her phone camera — as capturing the most important moment of the year.

“No professional filmmaker that gets paid to film for a living can do any better than a 17-year-old girl with her iPhone, filming from beginning to end, a cop with his knee on the neck of a man being murdered. That’s the best documentary moment you’ll ever see,” she says of the killing of George Floyd. 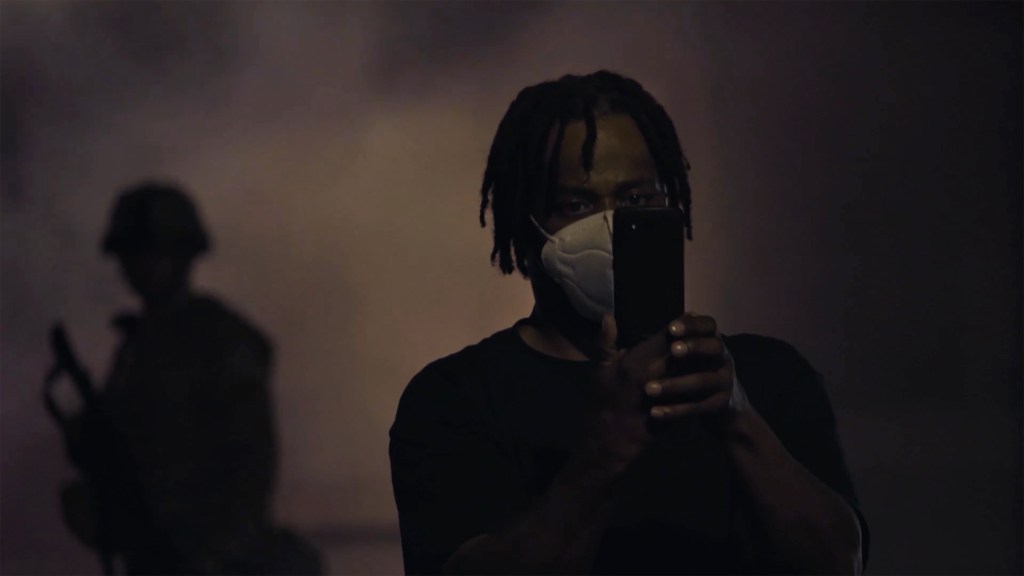 Pelosi didn’t have a call sheet for what she filmed over the course of a year, and she couldn’t have predicted the twisty route that 2020 has taken — who could have forecast the pandemic?

“I knew that America was going to be in bad shape in an election year in 2020. It was not hard to predict that the brick was about to hit us on the head. We couldn’t have predicted a global virus that was going to kill over 200,000 Americans,” she says. “But we could have predicted that this was going to be a really bad year, maybe even the worst year in the history of America.”

She films as a one-person crew with a handheld camera, lending her an agility to go wherever the current events take her. (And, worth noting, adhered to the Directors Guild of America COVID-19 guidelines, which required daily testing while filming.) Over the course of the film, Pelosi documents the immigration crisis at the U.S.-Mexico border, the reopening of the Walmart in El Paso, Texas, where 22 people were killed in a mass shooting, protests in Minneapolis — in October 2019, when a Trump rally turned its attention to Rep. Ilhan Omar, and in spring following the killing of Floyd — the Super Bowl, and a Trump rally in Oklahoma. The film concludes at the July 4th ceremony at Mount Rushmore.

Pelosi wanted to represent the cacophony of American views in her film, although the documentary inherently skews liberal. 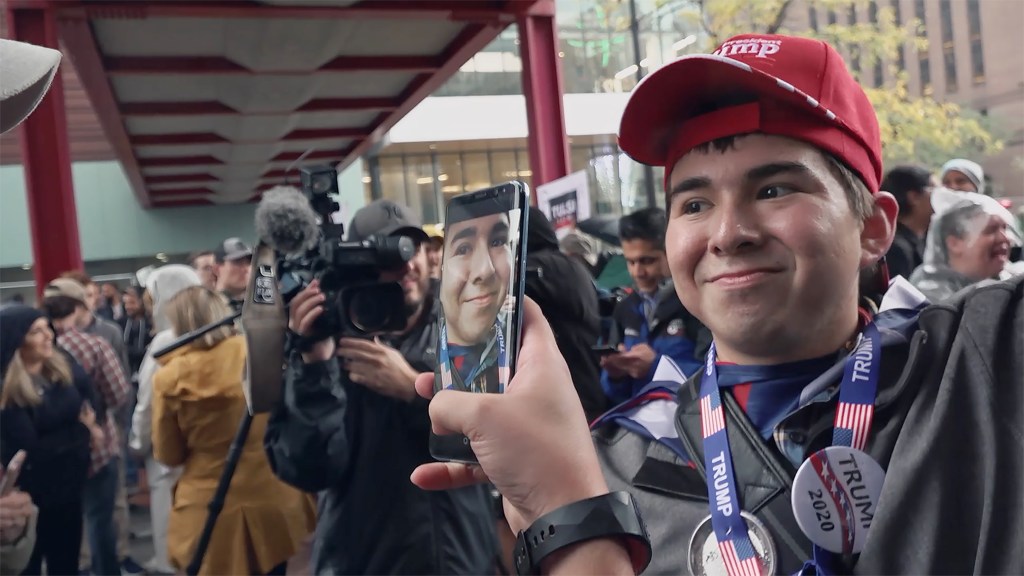 “My main mantra in my household to try and keep everybody sane is, ‘what if we’re wrong’?” she says. “We could be wrong about everything. It may just be we live here, this is how we see things. But if we lived in Texas, we’d have a completely different worldview — because we have cousins that live in Texas, and they have a completely different worldview. My sister married a Republican, and those are Trump voters. And that’s my own family.

“America is a cup of boiling water,” she adds. “I was just trying to document the boiling. I didn’t know that Donald Trump was going to ask the military to shoot chemical agents at me, at America, at the peaceful protesters on June 1, when I happened to be outside the White House. I didn’t know he was going to go take a selfie at a church and use chemical agents to clear the peaceful protesters before curfew.”

Out of everything she’s witnessed over her multidecade career as a documentary filmmaker and as a field producer at NBC, Pelosi describes that experience — and all so Trump could take a selfie — as the most shocking. 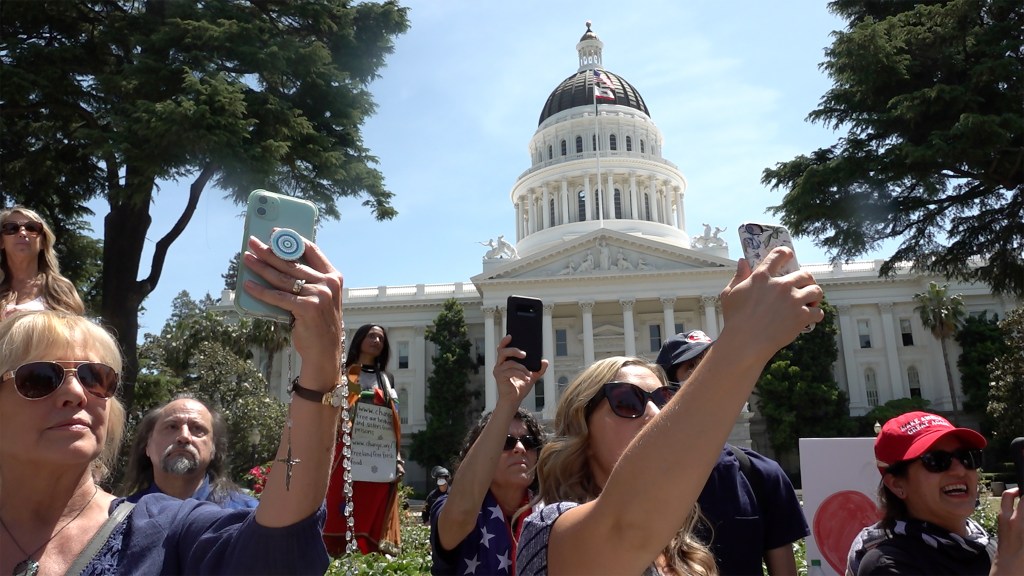 “I’ve seen some awful things, and I still think that’s the most awful thing I’ve seen with my own two eyes,” she says. “I never thought in my lifetime, in my country, I would see my own military shooting chemical agents at peaceful protestors. I have to say, it still stuns me to talk about; I still haven’t gotten over it.“

The film premieres on Oct. 23 on Showtime, a day after the final presidential debate and less than two weeks before the election. It’s not likely to change any minds, but that’s not the point — if anything, Pelosi hopes it underscores the importance of voting and civil engagement.

“It’s just the year that white America woke up. So things in the arc of history are getting better, because at least we’re paying attention now,” she says. “Hopefully it will just make people wake up and realize that their leaders do matter, and it matters who they vote for. Politics is for everyone.”

And she hopes that when viewers watch her film 10 years down the line, they’ll see 2020 for what it was: crazy. 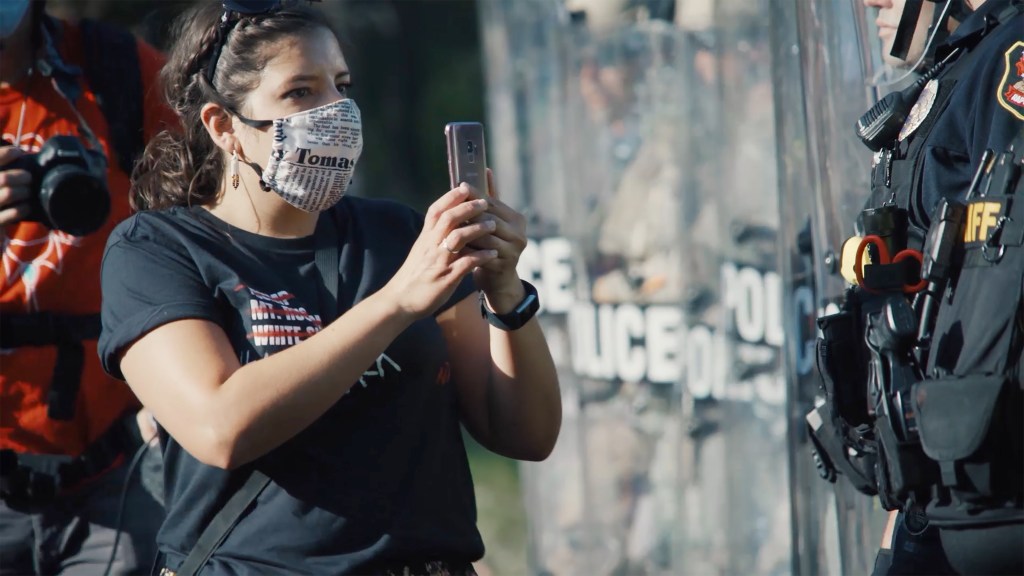