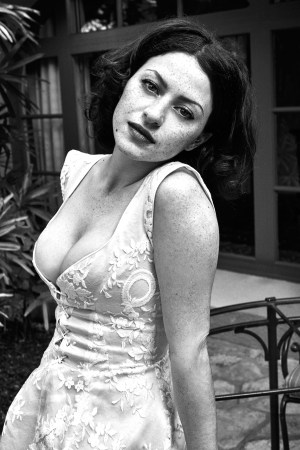 “I’ve been to Sundance like seven times,” says Alia Shawkat, who this year sees not one but two films take the screens in Park City.

Up first, at Sundance, is “Green Room,” which opens nationwide in April and stars Patrick Stewart, Imogen Poots and Anton Yelchin. Her other film at the festival, part of the competition, is Clea DuVall’s directorial debut “The Intervention,” starring Melanie Lynskey, Natasha Lyonne, Cobie Smulders and Ben Schwartz.

Shawkat grew up in Palm Springs, Calif., where her parents own a strip club in neighboring Cathedral City. After some local modeling, her mom tried to help get her name out. “My mom didn’t really know what to do but she found out a way to send head shots in,” Shawkat says. “No one responded. Or they said I was too ethnic looking.”

When she did break, it happened fast. “I got a Barbie commercial as my first job, and then that same weekend I got ‘Three Kings,’” she says of the David O. Russell film starring George Clooney and Mark Wahlberg, and in which her father also had a role.

The role that really made her a known face, though, is “Arrested Development,” the off-kilter comedy that continues to collect the most dedicated of fans. Shawkat, who’s now 26, was 14 when she filmed the pilot. “When they cut the pilot there was a paper covering the front that said in handwriting ‘this is a very fly-by-the-seat-of-your-pants kind of show,’” she recalls. “It kind of gave us a sense that this was going to be something different. It was our own version of the comedy the British version of ‘The Office’ had.”

Though the show went on to gain cult status, by Shawkat’s admission the early days were rather empty. “No one was watching it while we were making it — I didn’t think it was not going to go, but it kind of felt like we were making it up for ourselves,” she says. “And then we won all these Emmys and that was kind of crazy — like whoa, big time! And then still nobody watched it.”

Once “Arrested Development” wrapped, Shawkat decided to take a break from acting. “I moved to New York. I had a boyfriend. And I started painting,” she says. Though she was never trained in art, the then-boyfriend encouraged her and “it just kind of shot out of me. I just did it, and these huge pieces came out and it was really fun, and now it’s a big part of my life.” The first weekend of Sundance she in fact was in Marfa, Tex., for a show of her work, and she’ll head to L.A. soon after for another.

“Acting, it comes in waves,” she says. “I’m figuring out a way to balance it and painting. When I’m not acting I’m writing, usually. I’m about to film a movie I wrote, I’m also painting at night. And then sometimes I’m just watching TV and eating dinner with friends, you know?”

She popped back up on cult TV last year when she guest-starred on Comedy Central’s hit “Broad City,” playing the lookalike love interest to the show’s star Ilana Glazer. “I was obsessed with the show, and I was always getting confused for her [Glazer],” Shawkat says. “Next thing you know I’m group texting with Ilana and Abbi, sending funny photos.”

Much of her upcoming work speaks for itself in the types of women Shawkat is drawn to playing. “I look for a character that is not too afflicted by a male’s purpose, and has her own story, and wants and goals and all that; a character that is not filled in with answers from another character,” she says. “I’m not as interested in telling the story of a guy who has got to get laid before midnight, or whatever. I just don’t want to see that movie, so I don’t want to be in it.”

Her character in “Green Room,” Sam, was originally written for a man, which might be what makes the role interesting for her to explore. “I’m interested in the idea of the battle of the sexes, the classic dynamics men and women have against each other getting really played,” she says, “and I want to start telling stories personally as a writer and an actor that are beyond that. [I’m interested in] things that I’m dealing with in my life, things I’m curious about that are happening around the world, in terms of how women are dealing with how things are changing. There are changes and more interesting stories to be told, of how men and women, women and women, and men and men, relate, instead of just the classic ‘a guy wanting a girl, and he’ll do anything to get her’ thing.”