“We wanted it to be like a dinner at home,” said an executive of the label, remarking on the convivial atmosphere, adding: “but at the Ritz.”

Amfitheatrof, who had just bounced off the plane from New York the day before — her first trip abroad since the coronavirus pandemic halted world travel — said she was excited to finally see and touch her designs.

“I started designing the collection two years ago, little did I know how much we needed to travel to another planet,” she told the assembled guests, a mix of journalists, clients and celebrities, including Alicia Vikander, Stacy Martin, Catherine Deneuve and Chiara Mastroianni.

At the end of the meal, when the plates had been cleared, Vikander popped over to a friend’s table, signaling it was time to start heading to the hotel’s Hemingway Bar. The actress, who is based in Portugal, had spotted a neighbor from Lisbon  — Christian Louboutin, who was tucked in a corner table with Mastroianni. 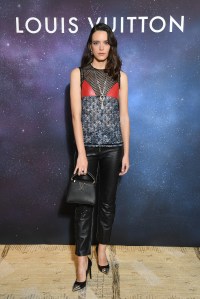 Traffic moved slowly out of the dining room, as a cluster of guests gathered around for a post-dinner gossip with Loïc Prigent.

“We had a good laugh,” he said, describing an animated debate at his table. Sophie de Fontanel wandered past with a fistful of wild flowers from the table settings, inspiring Prigent to grab some himself, which he tucked into the breast pocket of his jacket.

Martin was gearing up for a trip east, to a town in Macedonia, to shoot a series about people who worked in fake news during the last U.S. presidential elections.

“I play a teacher that gets taken into the whole idea that fake news is a way out of desperation,” she said, explaining that it was a way for some people living in poverty to make a lot of money.