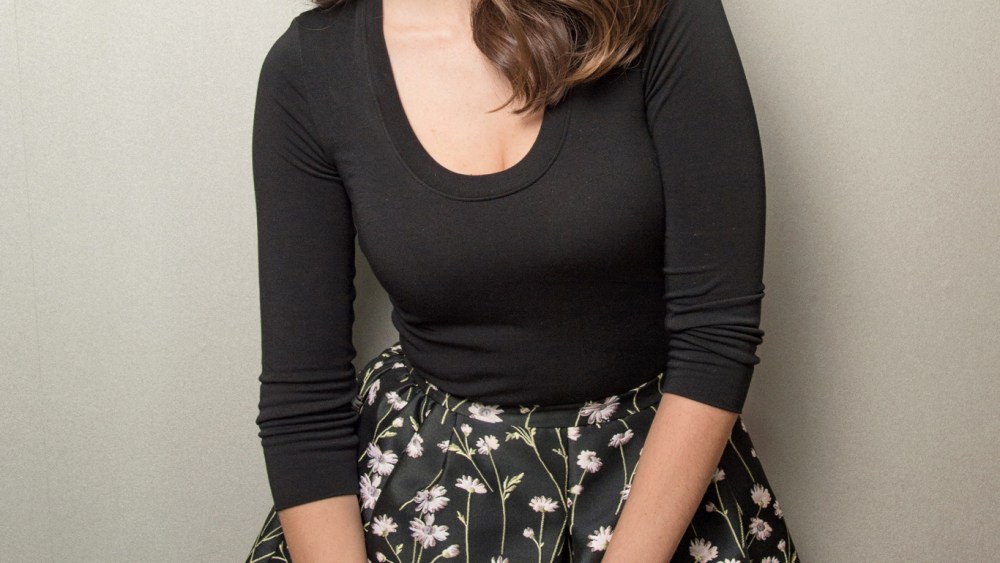 After “Mad Men” and “Community” aired their final episodes within three weeks of each other last spring, Alison Brie could have kicked back and enjoyed a much-deserved break. After all, she had spent the last eight years working on the beloved shows, six of them simultaneously.

But far from taking a breather, Brie instead has three movies out early next year — including the rom-com “How to Be Single,” with Rebel Wilson and Dakota Johnson — and recently delved into producing for “Teachers,” a TV Land series that launches Jan. 13. When WWD spoke with the CalArts graduate, it was a rare off day between shoots for “The Disaster Artist,” directed by James Franco and starring her fiancé (and Franco’s younger brother), Dave.

“I know those guys!” she says.

Before collaborating with her family-to-be, Brie shot a drama with Gerard Butler and Willem Dafoe in Toronto called “The Headhunter’s Calling,” and worked in London on “Downton Abbey” writer Julian Fellowes’ new period piece, “Dr. Thorne.”

In short, she’s clearly been busy. Here, the 32-year-old talks her latest roles, going behind the camera and working with the Franco brothers.

WWD: You have a lot of very different projects in the works. How do you decide what to take on?

Alison Brie: I’m always excited by stuff that is different, especially lately. “Community” opened my eyes to working in comedy more, and so a lot of jobs that come my way are contemporary comedic pieces. So when the [“Dr. Thorne”]  opportunity came up, it just really excited me. The script is wonderful, it’s adapted from an Anthony Trollope short story. I’m a huge “Downton Abbey” fan, and there are similar themes of wealth — who has it and who doesn’t and how they feel about each other, and a love story mixed into all that stuff. Having wrapped “Mad Men” over a year ago, I was excited to do some sort of period again and be in costume in a different era.

WWD: What do you like about working in period?

A.B.: A little more work goes into the history of things. Julien [Fellowes] is such a stickler for the etiquette of the time, and everyone doing things appropriately, so there’s just a bit more research involved. The way people spoke was much different, and the way people carried themselves because they were wearing corsets and three or four layers of skirts or petticoats. The value systems are also very different — that’s something that I also found to be very true when working on “Mad Men.” There seemed to be many more rules than there are today.

WWD: Fans of your work in “Community” will be happy to see you’re still doing comedy in “How to Be Single.” What was the filming process like for that?

A.B.: My storyline centers around Anders Holm and Jason Mantzoukas’ characters. We were shooting on this bar set when I was there, and I feel like most of the time, we were hiding from the real clubbers who were out and about. Because when you’re shooting in New York, you know, nothing stops. We were shooting right in the middle of the Meatpacking District, and we were shooting at night and everyone would be going out. And so mostly we just were trying to keep our heads down and keep focused on the work.

WWD: It couldn’t have been all work and no play with that cast, though.

A.B.: One night after work we tried to go out, me and Anders and Colin Jost. Colin was like, “I know this great bar or club or something.” And we’re not really dressed that nice, I had a backpack, and we tried to roll into some place for a mellow after-work drink. It was a very serious club — we had to wait in line for a long time, and then we had to take an elevator and when we stepped off the elevator there was like mist and smoke in the air. There was a jacuzzi…there were girls in bikinis, it was totally insane. And Colin just turned to us and was like, “Yeah…this isn’t the place I was thinking.” We did a quick lap and then backed away slowly. That was my awesome New York club experience. If I had been wearing a bikini, I think I probably would have stayed.

WWD: What do you like about working in comedy versus drama?

A.B.: I actually think working in the two is quite similar, because it’s about being true to your characters, and all of that stuff is coming from the same place. Comedy is much harder to nail. I think drama is easier to teach people how to do, and with comedy, people just have it in them or they don’t. Comedy is very difficult because it’s so subjective and everyone has a different sense of humor and people find different things funny. So to find things that are appealing to many people can be quite challenging. That said, I think comedy sets are generally much more fun than drama sets. The nature of the work is that you are trying to make each other laugh and when a cast is having fun, that comes across on-screen. Obviously a cast is not going to be joking around and having as much fun when their character’s son is dying of cancer [like Gerard Butler’s in “The Headhunter’s Calling”].

WWD: How did you get involved with “Teachers,” and what made you want to produce?

A.B.: “Teachers” is created by, written by, and stars these six amazing women, an improv troupe out of Chicago called the Katydids — they’re all named Katy, or some form of it. It’s about these elementary school teachers who, like real elementary school teachers, are real people who maybe don’t live the purest of lives. I had been talking to my agents about wanting to do some work behind the camera, and I thought this was so funny and I felt really in sync with their comedic sensibilities. I was excited to help facilitate bringing these new comedic voices to the masses. I think as an actor, I have very little power in how things turn out, and I wanted to be a little more involved in something from start to finish.

WWD: What’s it like working with your fiancé, Dave Franco, and future brother-in-law, James, for “The Disaster Artist?”

A.B.: I’ve only shot a couple of days so far and it’s so wonderful, James is really great as a director. He’s very relaxed and warm and engaging. I haven’t worked with Davey before, other than a “Funny or Die” video that he wrote and we did together. It’s been a real treat to be on set and be able to watch his process with the more dramatic moments. It is funny because we don’t really spend  a lot of time on each others’ sets because we’re usually working simultaneously. I play his girlfriend in the movie, so it’s really fun.