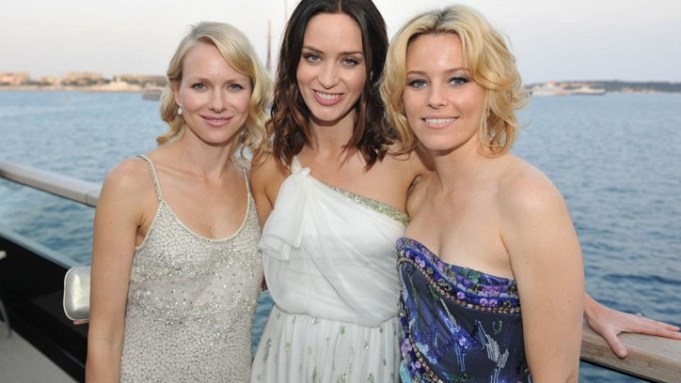 Stepping aboard Giorgio Armani’s flawless Maìn yacht on Wednesday evening, Naomi Watts kicked off her heels and joined the starlets, fashion folk and all around party people who were gathered there to celebrate her film “Fair Game.” Elizabeth Banks, Vladimir Roitfeld, Roberta Armani and Natalie Imbruglia sipped Champagne as the sun went down over the glittering Mediterranean.

Emily Blunt donned a white evening gown for the high-class ocassion, but she’ll soon trade it for less glamorous garb when she begins shooting “Salmon Fishing” in London and Morocco with Ewan McGregor.

Natalie Imbruglia slipped away in time to make the Replay bash at the Style Star Lounge where she was booked as the entertainment. There, Adrien Brody, who’s in town to sell the film “Wrecked” in which she stars, waxed nostalgic about his surroundings. “I’ve come here for several films, particularly at the start of my career,” said the actor who won an Oscar for his role in “The Pianist” after the movie itself nabbed the Palme d’Or in Cannes. “I have a very fond place in my heart for Cannes,” he said.

Over on Paul Allen’s notorious seven-deck vessel Octopus, Tommy Hilfiger hosted a soiree for the Rolling Stones documentary “Stones in Exile,” which premiered Wednesday. And though Bono once said that Cannes is about the have and have-yachts, Pucci’s Peter Dundas was opting out of the game altogether.

“I’d rather have a sailboat,” he said. “But this is pretty good for entertaining.”