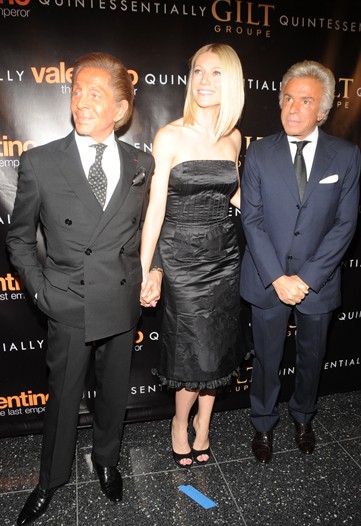 Valentino may be the undisputed star of Matt Tyrnauer’s “Valentino: The Last Emperor,” but the designer had stiff competition for the spotlight at the documentary’s New York premiere at MoMA on Tuesday night. Madonna, Gwyneth Paltrow, Martha Stewart, Blythe Danner, Anne Hathaway, Claire Danes and Hugh Dancy were just some of the A-listers on hand for the Gilt Groupe and Quintessentially-sponsored evening, which included a sit down dinner at the Oak Room of the Plaza Hotel.

“I’m so proud to share this moment with my friends,” said the designer, who spent the majority of the night holed up in a booth with Paltrow and the Material Girl.

While the audience applauded Valentino for letting cameras record his every move for two years, no one felt terribly inspired to sign up for it themselves. Madonna, herself the subject of two documentaries including 1991’s “Truth or Dare,” was ambivalent about allowing a crew behind the scenes again. “I don’t know,” said the singer. “Ask me after I’ve had a glass of wine.”

Other guests had stronger feelings. “I’m too self-conscious to have a camera crew follow me around,” said Hathaway, who has a cameo in the flick alongside then-boyfriend Raffaello Follieri. “It would be a recipe for disaster.”

That’s not to say Tyrnauer’s film is all wine and roses, and longtime pal Paltrow felt there was even more to the story. “He’s so naughty but nobody knows it,” said the actress. “He’s the naughtiest [man]-slash-gentleman in the entire world.”