All Around the Town 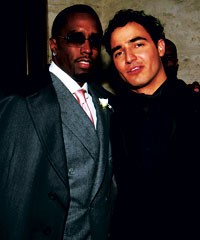 “I’m a very picky person,” said P. Diddy, between posing for pictures with strangers, hanging with Ashanti (who missed Posen’s show and was wearing Louis Vuitton) and always checking that Blackberry (For what? Another invitation?). “But Zac’s show was beautiful. It was the heavyweight of fashion shows. I loved the whole thing.” He added that he wasn’t just saying that because he’s his backer.

Posen said he was pleased with the response, but he wouldn’t get to take a break anytime soon. “We’re photographing my look book in my apartment this weekend,” he said, breathlessly.

As the designer danced with his crew, Vivica A. Fox pow-wowed in the opposite corner with Shannen Doherty, who had arrived from the launch of “The Godfather” video game in Little Italy dressed in a skintight black Dolce & Gabbana design. Later spotted at Marquee for Jennifer Nicholson’s party for Coca-Cola, the former “90210” star was out and about all last week at Joseph Abboud (which she mispronounced) and BCBG. Is there anything she learned from fashion week this season? “Make sure whatever it is you’re wearing holds up under 40,000 flashbulbs,” Doherty explained. “There was a questionable sweater I wore that in some pictures looks see-through.” What show was that at? “I’m not telling,” she squealed. “You almost got me.”

Though staunch supporters remained in their separate quarters, a few interlopers traveled between both designers. Sally Albemarle, who posed for Harper’s Bazaar with Costa last November, arrived at Indochine wearing Posen, while Posen’s right-hand girl, Claire Danes, met Rashida Jones there having changed back into the Calvin Klein ensemble she wore to Costa’s show at Milk Studios. (She wore a white Posen top and jeans to the designer’s show, where she chatted with her seat neighbor, Ashley Olsen, and loudly applauded the collection.)

Swank, the evening’s other guest of honor, arrived wearing a T-shirt that said “Respect,” which was designed by Crystal O’Hearn, a student at the Hetrick-Martin Institute of which the actress is a staunch supporter. Calvin Klein will sell the shirt in April. It’s funny how things can change in a few months. Last season, Swank may have been best known as the company’s underwear model; this season, with her performance in “Million Dollar Baby” knocking everyone’s socks off, she’s at the top of the Hollywood heap.

And Costa equally felt like he’d made leaps and bounds toward coming into his own at the house.