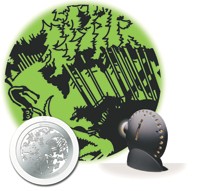 NEW YORK — The International Contemporary Furniture Fair has come and gone, but not without leaving some indelible impressions on visitors. In everything from graffiti-inspired rugs to intricate prints for wallpaper, the stylishness of an object appeared to be as much a selling point as the design, whether the category was eco-friendly pieces, modern children’s furniture, transportable homeware or experimental furniture.

Many flocked to Herman Miller to check out the updated version of the lounge chair that Charles and Ray Eames designed 50 years ago, and some went off the beaten path, looking for whimsical pieces like Mathmos’ space projectors, Lite Brite Neon Studio’s chandeliers, Ridgley Studio Works’ cube of illuminated stones and DouglasHomer’s HairyBertoia (onomatopoeiac) chair. There was also plenty of action beyond the Jacob K. Javits Convention Center, thanks to the “Everyday Fabulous” contemporary “home” Ikea set up in a warehouse across the street. Martha Stewart Living Omnimedia provided an added punch in its corporate offices 10 blocks south, where experimental furniture created by Rhode Island School of Design students and alumni was displayed.

Here’s a look at some of the more eye-catching pieces at the Jacob K. Javits Convention Center.

DUFFY LONDON
Chris Duffy, director of Duffy London, said he was “totally shattered” by the reaction to his illuminated framed stretched canvases. Environmental 337 in Brooklyn and ID in Chicago were among the boutiques that picked up his wall hangings and tables. He came up with the idea while at a friend’s house. London said he was wondering what to draw on the blank canvas he had stretched over a frame and leaned against a lamp, and liked the way the light graded on the canvas so much that he decided to create just that. So the British designer made printed fabrics of designs he’d photographed, stretched the fireproof fabric over a wooden frame and illuminated it from behind with a light.

“I loved the idea of a blank canvas because it has so much potential,” he said. “I like to work more on the process.”

CHA CHA SUPERMARKET
With its graffiti-type graphics splashed on rugs, runners, pillows, lamp shades and low-level seat cushions, Cha Cha Supermarket caused the occasional pedestrian traffic jam with its “homeware with attitude.” Last year, the London company made its debut and this year it camped out at the ICFF for the first time. Its bright-colored rugs, with catchy names like “Gossip” and retailing from $1,548 to $3,172, were the show standouts, according to Cha Cha Supermarket director Ron Aslan. Selfridges liked the looks of Cha Cha Supermarket so much that the label landed in a window display in the retailer’s Oxford Street store.

VITRA
Adhering to her design philosophy, “Form follows feeling,” Hella Jongerius whipped up the Worker armchair, the Polder couch and the Bovist floor cushion for Vitra, the Swiss home collection. Comfort was not lost for the sake of design. Fabric and leather are used for the chair’s double-layer back cushions and the intricately designed Bovist can be used as a stool or a pillow. “Lacemaker” is one of the motifs Jongerius used for the Bovist, borrowing from a Vermeer van Delft painting of a girl engrossed in her embroidery.

FLEURVILLE
Fleurville, a San Rafael, Calif., company, called on product designer Yves Behar to overhaul the standard high chair with a modern twist. What he came up with is a bright yellow futuristic, ergonomical design that looks more like something from “2001: A Space Odyssey” than “Romper Room.” The $900 fluted chair has an Always-On braking system but the “quiet” polyurethane wheels can be put in motion by squeezing a handle, said co-founder Steve Granville. The chairs, which have molded cushions called “body envelopes” that can be removed for cleaning, are Fleurville’s first at-home products. The two envelopes are geared for children between the ages of four months and one year, and one year and two years old.