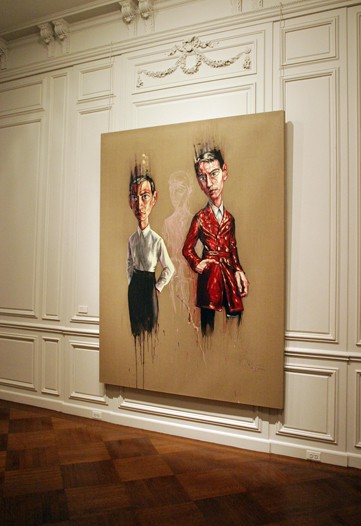 Zeng Fanzhi is a Chinese artist whose work looks kind of like a cross between Francis Bacon and Tim Burton. On Wednesday, a smattering of art world types and fellow Chinese A-listers showed up to fete him at the Acquavella galleries on the Upper East Side before a dinner at Phillipe on 60th Street. Despite the recession, the gallery sold nearly a dozen paintings at prices that ranged between $100,000 and $2 million each. Before the market collapsed, Fanzhi’s work was selling for as high as $9 million, but everyone professed to being pleased with the evening’s results – from the Acquavellas to the artist himself. “I’m very content,” said Fanzhi, speaking thorugh his translator as guests like Zhang Ziyi, Vivi Nevo and Wendi Murdoch munched on steamed dumplings, spare ribs and sauteed string beans. (Get it? Chinese artist, Chinese food.) But Murdoch said she was holding out on buying because the paintings were still awfully expensive. “I’m hoping to get the one I want at a better price,” she said with a laugh. As for Ziyi, she was feeling a lot of pride for her fellow countryman. “Whenever I have a movie here, someone else from China gets quoted saying ‘I’m so proud of her as a Chinese person. It’s great for our country.’ Well, tonight I’m thrilled to say that as a Chinese person, ‘I’m so proud of him.’” Go China!