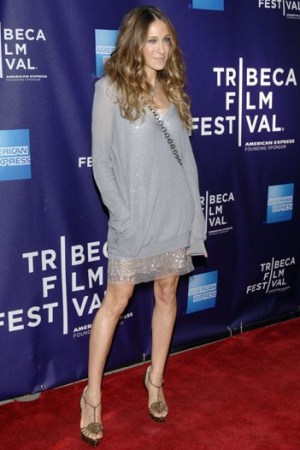 On Friday night — four days before the Met Gala — the style set got a head start on celebrating American fashion with the Tribeca Film Festival’s premiere of “Ultrasuede: In Search of Halston,” a documentary about Halston’s legacy by first-time director Whitney Sudler-Smith.

Sarah Jessica Parker, who was appointed Halston president and creative director in January, joined many of the boldfacers who participated in the flick, including André Leon Talley, Pat Cleveland, Amy Fine Collins, Ralph Rucci and Bob Colacello, for the screening, as well as a subsequent discussion panel, moderated by Matt Tyrnauer (himself an expert on fashion documentaries, having directed last year’s “Valentino: The Last Emperor.”)

While most of the panel’s discourse was dedicated to sharing fond memories of the designer, things turned heated when Talley recalled “people crying” at Yves Saint Laurent retrospectives during a recent trip to Paris.

After the discussion panel, guests headed over to the newly opened Trump SoHo hotel for an after party sponsored by Ambrosi Abrianna and Vanity Fair.