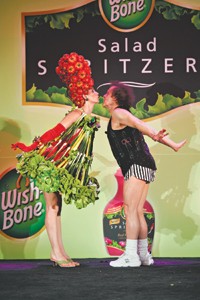 Thursday’s Fresh Air Fund benefit attracted the likes of Mariah Carey, Kevin Bacon and Patricia Heaton, who was the evening’s emcee. In an ironic twist, however, the night lacked one thing — air. The evening’s humidity and subsequent downpour raised temperatures inside the tent at Tavern on the Green to sweltering levels. “It’s clear that people at the Fresh Air Fund put us in sweltering tents to remind us to get kids out of this environment,” Heaton said jokingly. Themed a “Salute to American Heroes,” honorees were Donna Karan, Spike Lee, John Turturro and Marisa Tomei. Lee recounted growing up in the city and going to public school, and that while classmates would spend their summer weekends at Coney Island, he was lucky enough to leave New York for the South. “We can’t forget that two or three weekends in Coney Island do not make a summer.”

Nature of a different kind played a role in Friday’s Wishbone Summer Salad fashion show at New York’s Grand Central Terminal to promote the brand’s newest low-calorie product, Salad Spritzers. If it were up to show host Richard Simmons, every fashion show would be dedicated to salad. Models were decked out in fruit-covered bathing suits and red cabbage gowns, all accessorized with cherry tomato necklaces and baby carrot bracelets. Male models were also on hand to spritz the females with salad dressing as they took the catwalk. All designs were created by costume designer Chris March and Jay McCarroll, star of “Project Jay” and last year’s winner of the Bravo’s “Project Runway.” “Have you ever seen such a salad-rageous fashion show?” Simmons punned mercilessly.