NEW YORK — According to author Bridie Clark, trying to throw a last-minute Halloween costume together is like trying to recall a good joke on command. “You can never think of anything,” she says. 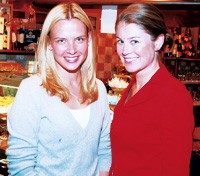 NEW YORK — According to author Bridie Clark, trying to throw a last-minute Halloween costume together is like trying to recall a good joke on command. “You can never think of anything,” she says.

So, just in time for Sunday’s festivities, Clark, 27, an editor at ReganBooks, and her co-author, fashion publicist Ashley Dodd, 28, have written “The Halloween Handbook: Dress-Up for Grownups” (Workman), a wacky DIY guide to 447 no-brainer costumes. Divided into 14 sections with names like Come-Hither Costumes, Literature and Arts and Crowd Participation (which adheres to the more-the-merrier group dress-up philosophy), the chapters offer costume how-tos, plus historical tidbits and tips such as “how to make a wart from scratch.”

But the most interesting part of the book may be the photos. Clark and Dodd rounded up their society darling pals to photograph them in various forms of drag. There’s Zani Gugelmann as Evil Knievel, Lauren Davis as Jackie O and Marisa Noel Brown as a Playboy Bunny. Fashion insiders also will recognize a number of staffers from Paul Wilmot Communications, the PR firm where Dodd works.

The authors, who both appear in costume multiple times in the book (Dodd is the Crayola on the cover), shot 75 costumes in one day. “We took over a section of the publishing office and organized a garb section and a makeup section,” says Dodd, who raided Kmart for props.

“The Halloween Handbook” took two years to come to fruition. Clark and Dodd met several years ago during a weekend getaway in Maine. “There was no television and no distractions,” says Clark. “We played a lot of charades and got in touch with each other’s dorkiness.” Through a family connection, they pitched several book ideas, until this one got the green light.

Among Clark’s favorite costumes are the word plays: Social Climber, which involves a ladder, pearls and hiking shorts, and Chick Magnet, consisting of marshmallow chicks pinned to a black outfit. For Dodd, it’s Gold Digger, a gold ensemble paired with a shovel.

Now that the authors are costume pros, the big question is what to wear for Halloween this weekend. “I have no idea,” says Dodd. “We do love Halloween. Or we did.”