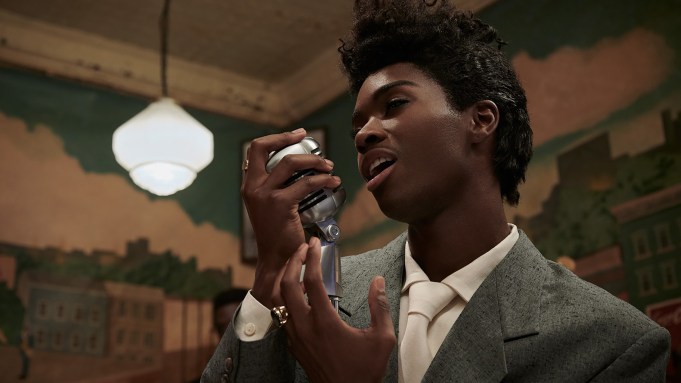 Alton Mason has just returned home to Arizona from Cannes, his third time at the festival (thanks to amfAR parties) but his first as an actor in one of the festival’s films. Mason, the 24-year-old top model, is making his film debut in Baz Luhrmann’s “Elvis,” in which he plays Little Richard, a role he landed after Luhrmann was transfixed by watching Mason dance at a GQ after party in Australia.

“Listen, God don’t play about me,” Mason says about his fortune.

Below, we chat with Mason about his breakout role and where his career is headed.

WWD: What was it like to finally see the movie?
Alton Mason: “Oh my gosh. Well, a lot of nerves. It felt just so surreal because when you’re sitting in that seat and walking that carpet with your cast, you’re also reflecting on where you started and how you got there and how much your family sacrificed for you to be in that realm. So it felt so surreal. It felt kind of crazy.”

Have you always been interested in acting?
“I have. When we moved to Greece, when I was about six or seven, I went to this international school called ISL in the city of Larissa. I remember I loved my theater teacher there and we got to do ‘Oliver Twist.’ And then we moved back to Arizona and I played Wilbur in ‘Charlotte’s Web’ and Seaweed in ‘Hairspray.’ And I really developed a love for theater and acting, more so than the sports I was doing. I was doing basketball and gymnastics at the time, but once I graduated high school, I went to American Dramatic Arts Academy in L.A., AMDA. And I remember just falling in love with the art form of it, and the way it made me feel, the way I got to express myself and be introspective and vulnerable.”

How did you meet Baz Luhrmann?
“I met him in Sydney, Australia, for the GQ Awards. He was receiving movie icon of the year and I was receiving model of the year. And my speech was right before him and I gave a speech that kind of was a testimony of me overcoming my fear and dealing with anxiety and navigating through that.

[At the after party] I was dancing, I looked to my left and my mom was talking to Baz and I was like, ‘Oh my gosh, what is my mom doing?’ And in that split second, my mom ran over to me and she’s like, ‘Baz wants to talk to you.’ And Baz came over to me. He was like, ‘Hey, I love the way you move. And I loved your speech. Do you sing at all?’ And I was like, ‘Well, yeah. I do some singing, but I come from a lineage of singers. My great, great, great aunt is Mahalia Jackson. And my dad is from Shreveport, Louisiana.’”

How did you react when you were offered the role?
“I went in the bathroom and started crying my eyes out. I was just so thankful because it is like the role found me. You know? It’s like Baz found me and chose me. It’s like Little Richard chose me.”

What kind of music did you grow up listening to?
“Oh, we grew up listening to everything, Michael Jackson, Prince, Aaliyah, Sade. My mom used to put me to sleep to Sade. Mahalia Jackson, Little Richard, Frank Ocean. Who else? Beyoncé, of course, Biggie, Tupac. My mom birthed me to Tupac during that time, because that was the year he died. TMI.”

In what ways did your modeling experience come into play with acting?
“I would say self-awareness in front of the camera. It’s actually funny with modeling and acting because there’s a thin line that you get to compare and contrast with. Because when you’re modeling, you are kind of self-aware of the product and your expression. And with acting, you kind of are selfless. You kind of surrender to the environment and to who you are and the character and the extras and the surroundings and the set. So I think modeling and fashion definitely strengthened my muscles with being comfortable in front of the camera. But I definitely think they’re very different. And I love that about both of those art forms.”

Are you interested in continuing to act?
“Oh, most definitely. I loved this experience. I love the art form of it. I love being in the theater and watching myself back and realizing how tangible it is and how this is a film that will be with me forever, that I get to show my generation and their generation. And I really have developed a true love for it, even more than ever.”

What is your next acting project?
“It’s a surprise. I can’t tell you.”

Sydney Chandler Is Ready to Rock